When one thinks of long tailed creatures, one think of lemurs, kangaroos, my 3.5 legged newt Bob and T-Rexes.

In the automotive context however we are reminded of extended projects like Porsche’s 917 Gulf liveried LeMans racer or McLaren’s M6BGT road car, circa 1968. So when McLaren started teasing us with a new long-tail our minds immediately went back in time to when cars were long and men wore plaid. But today McLaren unveiled the new 675 LT ahead of the Geneva show next week and needless to say, it’s Martin shorter than I thought.

McLaren says the 675LT is designed to “…re-establish the McLaren ‘Longtail’ heritage, focus on light weight, optimized aerodynamics, increased power, track-focused dynamics and driver engagement.” Based off the existing 650S the new 675LT may sport more power and a few new nibbly knobs, but is still in essence a more tricked out version of its sibling. But even though the car doesn’t have the old school dimensions it does in fact derive its name from like its iconic predecessor, the McLaren F1 GTR Longtail. 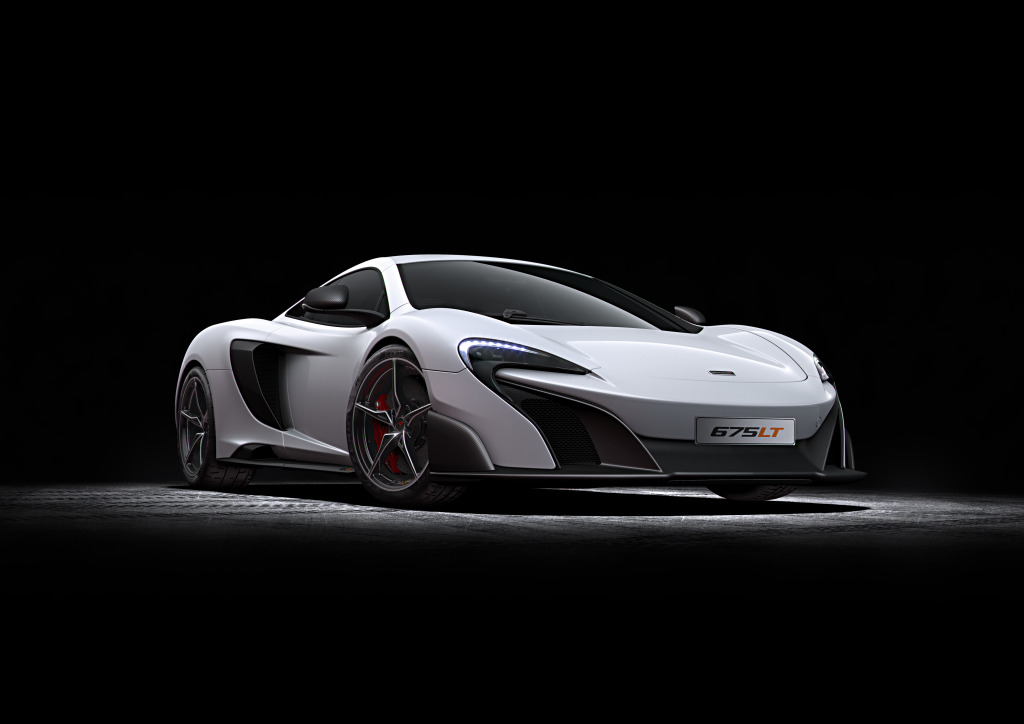 Moving on. Underneath the rear engine cover resides the same 3.8 liter engine twin-turbo engine found in the entire McLaren line, but in the 675LT there exists 50 percent newer componentry. Those newer bits and bites include a 100 kg reduction in weight, giving the car title of lightest in class at 1,230 kg (2711 lb) and a power-to-weight ratio of 541 hp per tonne.

So what kind of Jenny Craig cardio did they throw at the 675LT to bring its weight down. Well, carbon fiber body panels were incorporated extensively as a start, as were various chassis and body structure parts. Kids in California may however have a problem with the removal of the air conditioning as a weight saving measure. It can be ordered back in at no cost. 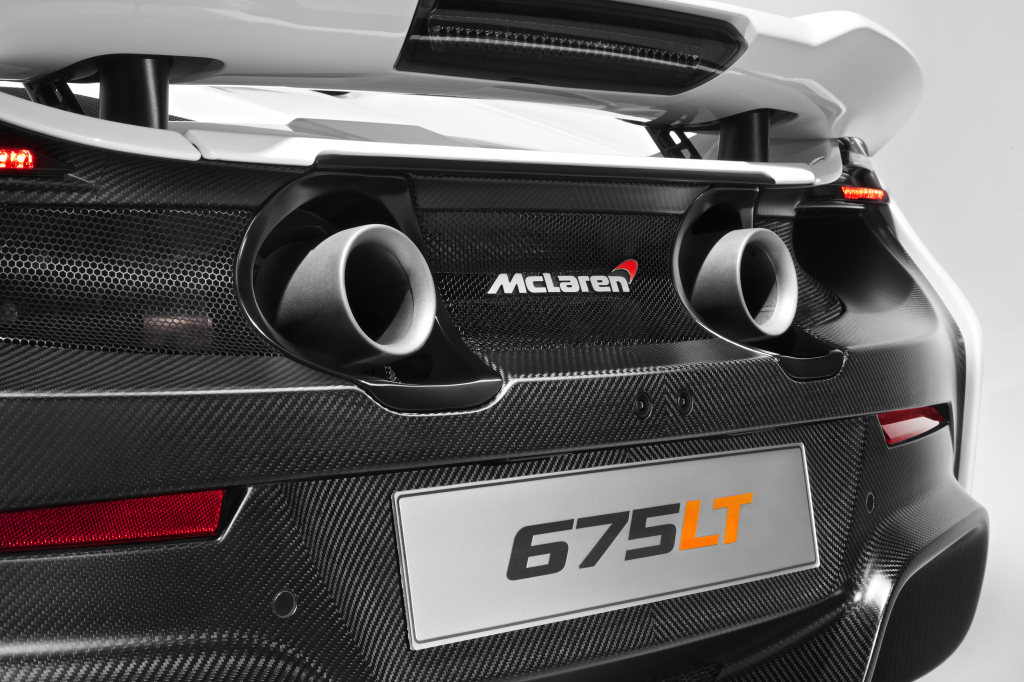 The key to the longtail’s performance comes from a 666 satanically inclined horsepower. McLaren may have just lost a bit chunk of their Christian demographic here. The 666 hp is an increase of 25 hp from the 650S’ output. Torque also gets a bump, increasing to 516 lb.ft. Those wondering where the darn does the 675 badging come from will be happy to know it’s a Brit measurement thing ie. 675 PS.

Power enhancements come in the form of new, more efficient turbos, a design change to the cylinder heads and exhaust manifolds, a new camshaft, lighter connecting rods, and a faster-flowing fuel pump and delivery system.

Upon further reading, it turns out the longtail moniker might actually be allowed. McLaren reports the airbrake/spoiler on the 675LT is actually 50 percent bigger than on the shop’s Super Series models. The new honking huge airbrake will not only assist in braking from speed but also increase air downforce to the arse end. If you look closely, note how the new design flows nicely into the lines of the new carbon fiber winglets.

At the front, the happy to meet you face of the longtail also gets a facelift. From the release, “Below a newly designed front bumper sits a prominent carbon fiber front splitter, which works the air harder, complementing new front wing end plates to increase downforce levels over the front bodywork. The turbulent air from the front wheel arches is ‘cleaned’ as it flows towards the rear bodywork by sculpted carbon fiber side sills which run the full length of the lower bodywork. A subtle air intake is incorporated ahead of the leading edge of the rear wheel arch, below a more pronounced side intake behind the door, both of which feed clean cool air into the side-mounted radiators.”

Inside the car is awesome and gorgeous as always but McLaren has seen to include ultra lightweight carbon fiber-shelled bucket seats, Alcantara soft stuffs modeled after the P1, and teeny tiny 675LT logos on the headrest….which is sure to leave a 675LT indent on the back of many a balding person’s head upon acceleration.

As most anyone how knows me knows that I beak off incessantly about my 48 hours of seat time in a 12C Spider and how much I actually physically have meaningful affections for that car. So now that this satanic inspired bit of track goodness has been released I can’t even imagine how annoying or annoying I’ll be once I get some much deserved time behind the wheel (McLaren…cough)