Celebrating 50 years as one of the industry’s most iconic and known marques, Ford’s Mustang has gone through a multitude of style revisions & drivetrain configurations since its debut in 1965.

The mid-70’s proved to be an embarrassment while the 80’s gave us the automotive equivalent of spandex. The 90’s saw an improvement in the fourth generation but styling and quality were really not okay. It wasn’t until 2005 when fifth gen-cars started to show more aggressive styling, reworked drivetrains and the rebirth of the very serious Shelby GT500.

Future us ahead/back to December 2013 where the Mustang we’re driving today, the sixth-gen car was unveiled. Wider, lower, roomier inside with three engine options (not counting the new GT powertrains) the car received a very welcome Independent Rear Suspension and complete stylistic makeover.

Stylistically, the new redesign in my opinion is the sharpest and most cohesive since the early 70s…which conversely means any design since 1973 (sans certain SVO’s) has pretty much been uninspired, lazy drivel.

However, design highlights on the new include; a trifecta of tapered taillights on either set inside the pony’s rakish rear end. Angry-esque headlights set back in a snub nosed grille, glare out from under an aggressively chiseled hood. Haunch treatments are mildly juiced up, while the space between the Pirellis presents similar chiseling treatments. 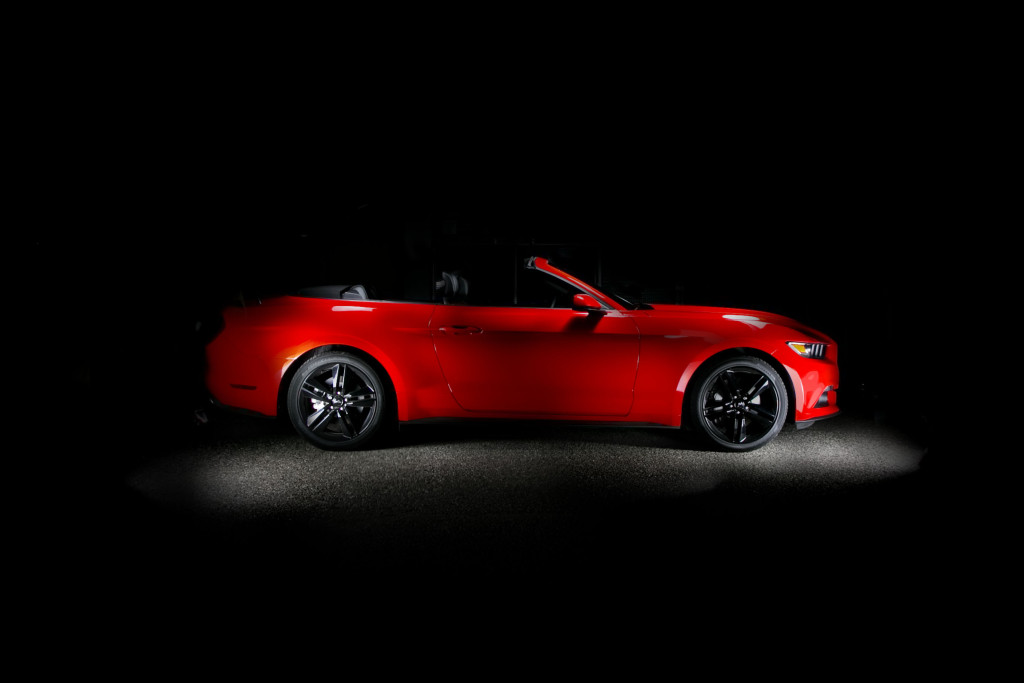 Sporting Ford’s sporty little 2.3 turbocharged eco-boost engine, the Mustang had no problem breaking the rear end out…with or without traction ctrl-alt-delete activated. The first time this happened was on dry pavement, which surprised me, although I had disengaged traction ctrl and set to Helmet Mode. I’m guessing the addition of the 19 inch Pirelli P-Zero performance rubbers in combination with the sudden cold spell and slightly slick roads contributed to the poppy break rear end.

But I would advise driver’s of the rear driven eco-boost to be careful on slick roads even with traction ctrl is engaged. When the turbo comes online, throttle linearity changes from a smooth accelerative line to a spiked one. It’s that sharpish spike that created eventful times when accelerating out of a corner.

The 2.3 boosted powertrain is perhaps less intended to satisfy that big displacement wanting American muscle car buyer, hence the GT350, but more directed at the global market where fuel prices and taxational issues are the order of the day. Ford reports mileage returns of 21 mpg in da city and 32 mpg on the highway (11.2 & 7.3 L/100km). Average mileage for my 200 km run to date sits somewhere around the 16.2 L/100km mark, or 14.5 mpg. 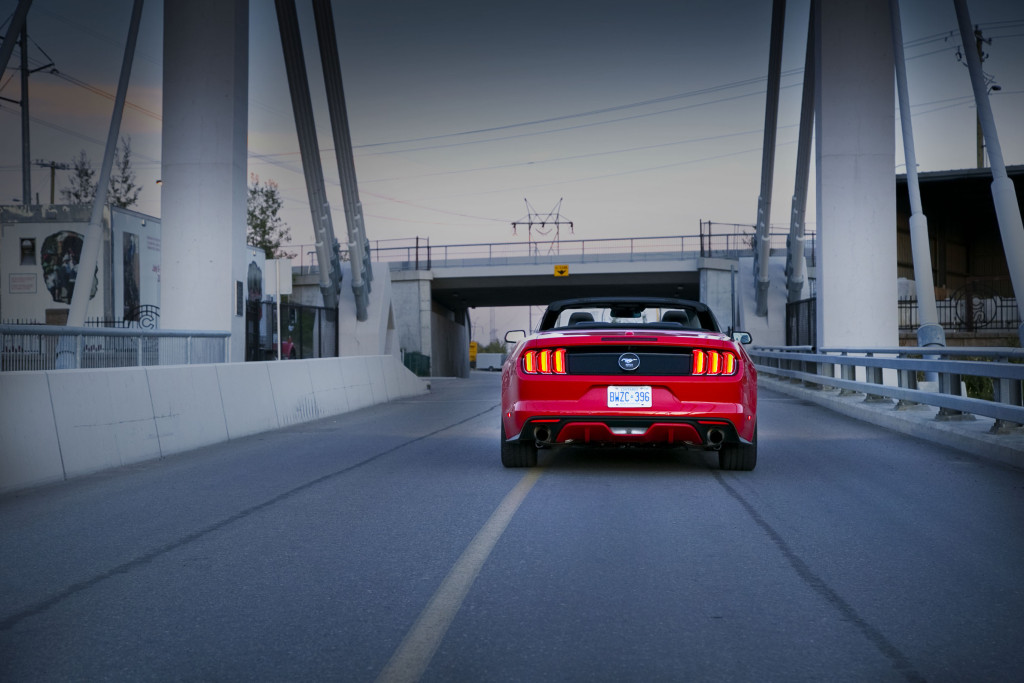 The car’s various modes; helmet, sport and sport plus, in combo with three steering tweaks provide some variation, although steering feel didn’t vary that much across the range. Shift points held significantly longer in autobox setting in Sport+ and Track modes. Exhaust emanations were definitely more Euro-four banger in nature and less gutteral of the flat-planed 350GTR variety.

Initial acceleration was on par with some euro cars sporting similar 4-bangers and turbo inputs, with torque figures of 320 ft.lb. of torque at 3,000 rpm and 310 hp at 5,500 rpm. But in combination with a revised chassis and suspension arrangement, the engine worked well in most modes. The ride, a bit roughish, but nothing unseemly from a car of this ilk.

Sporting direct injection, the 2.3 liter’s throttle response and torque sweet spot resided in the low to mid-ranges. West of Cochrane I found the turbo-four got its groove on running in the 3000-4000 rpm range. Once the power and turbos are spooled up then that spike becomes less of an issue and more of a benefit under mid-range tryouts.

Car & Driver reports 0-60 mph (96 km/h) times of 5.2 seconds, which is interesting since I couldn’t clear a time below 6.2 seconds. Maybe I had the emergency brake on. Maybe I was in Snow & Ice Mode. Maybe I was driving in sand. In any case, repeated attempts proved futile in trying to duplicate their figures.

Our tester sported Ford’s 6-speed autobox. Equipped with paddle shifters the gearbox brought about relatively quick shifts, not of the McLaren or Lamborghini variety, but pretty respectable. Gearing overall was a decent compromise of performance and civility. In full auto mode the gearbox acted accordingly with civilized inner city driving. Nothing out of the ordinary here when set to Normal mode. 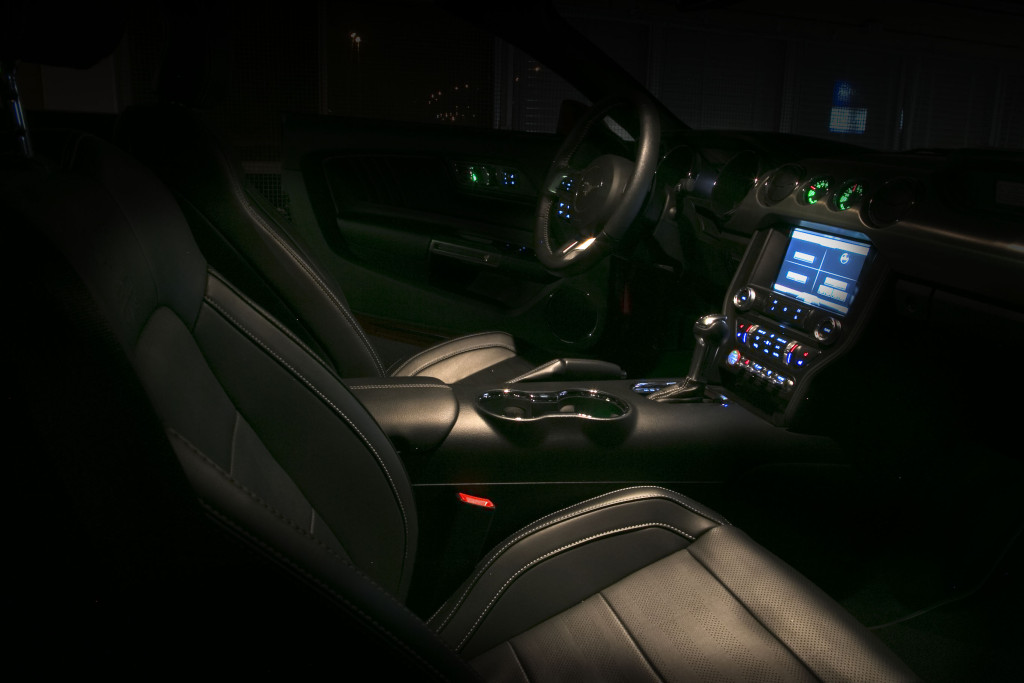 Weighing in at 3,524 lb (1600 kg) the new age ‘Stang did tend to feel a tad weighty nosey in quick transitional situations. However, running free and at speed about the windy, manmade stretches in the shadow of the Rockies, the car proved adept when pushed with throttle steer making the experience a quality one.

For a convertible road noise is always a concern which is why I was surprised at how quiet the Mustang with the top up. Top down and hat on, wind incursion became slightly more noticeable inside but overall, kudos to the roof team on this one.

Inside the 2+2 fit and finish was good with some cheap out trim pieces here and there. In the ‘backseat’ there’s no fitting anyone bigger than a ‘90s sized Kate Moss. My suggestion, lose the rear seats, add a cross-member to increase chassis torsional strength and save 150-200 lb on the scale. Win and win. 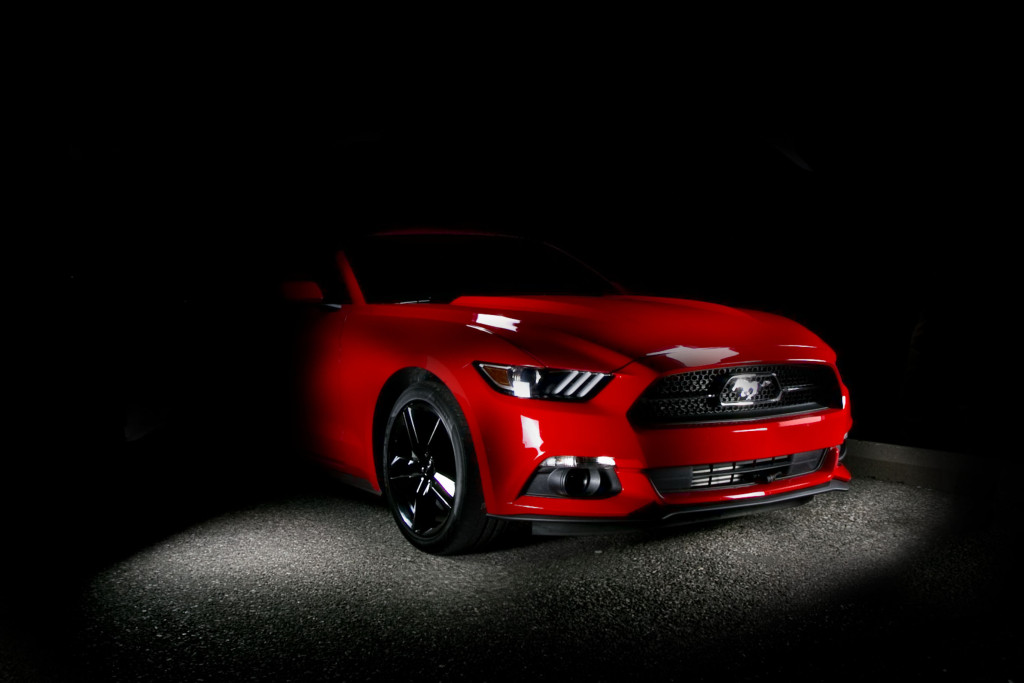 To put bodyweight things into perspective, it’s only fair we put the Mustang’s direct competitors on the scale. Chevy’s Camaro (LS Coupe 3.6 L V6 w 6-spd manual) is and has been the pony’s direct opponent the past 50 years. Tipping the scales at 3719 lb (323 hp / 278 ft.lb torque) http://www.edmunds.com/chevrolet/camaro/2015/features-specs/ the Camaro is a couple hundred pounds heavier with 13 more hp but 42 less torques than the pony. Advantage Pony.

The massively paneled, multi-wheeled obelisk of a tank that is the Dodge Challenger (SXT Coupe, 3.6L V6, 8-spd auto) chubs out the scales at 3834 lb. A full 310 lb heavier than the Mustang. The spaceship sized Challenger also loses out in the power departments with only 305 hp and 268 ft.lb of torques. Wonk wonk. Back to Jenny Craig for you.

Our car as tested came in at a reasonable $39,400 Canadian. Not bad for a convertible. However once the goodies and whistling bells, performance bits, etc were added on, the price rose to $50,500. $3000 of the $52k comes from legit add-ons like 255/40R19 performance Pirellis, beautifully painted 19″ black wheels and a 3.55 geared rear-end with limited slip axle. The 50th Anniversary Package also brought another $1700 to the bill with special floor mats, badging and other visual goodies.

To be fair, the middle aged to aging white guy looking to recapture his heady days tooling aboot in his pale blue 60’s Mustang convertible, may find solace in this new ride. The current tech and body form would be easily swayed by the new styling and eco-friendly demeanour. I’d really really really watch that back end on coldish, dampish days and completely consider an AWD or FWD alternative when winter comes…because winter is coming. 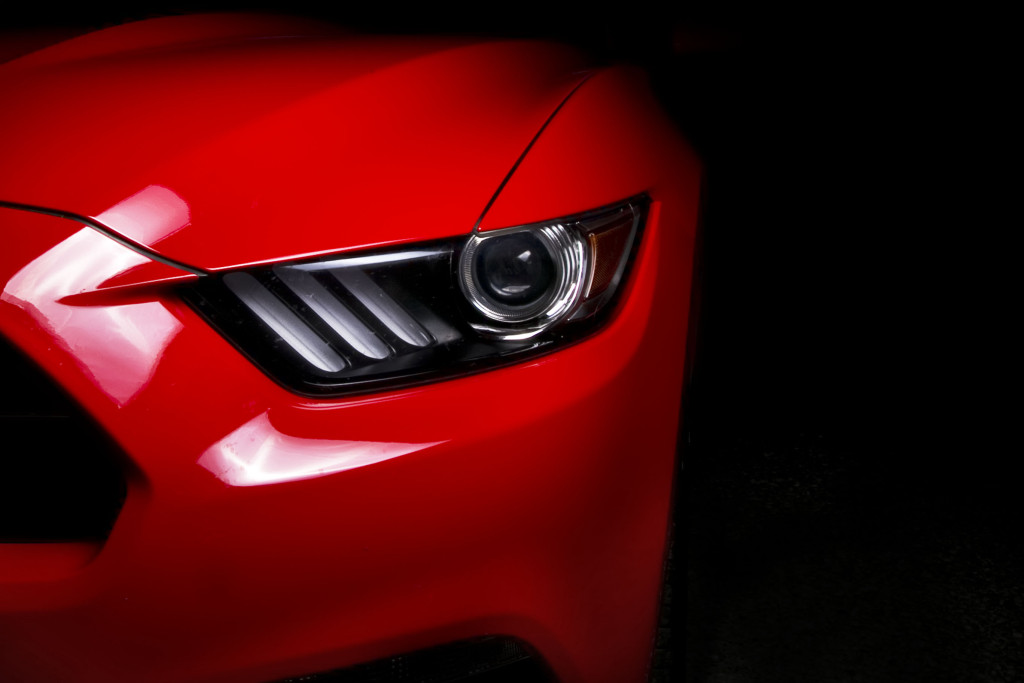 In honour of the Mustang’s half-century anniversary, we thought a spec-to-spec comparison betwixt new and old was in order. Interestingly, while the elder Mustang weighed in at only 2606 lb, a full 900 less than current, its 4.7 liter V8 out displaced the Ecoboost by a full 2.4 liters but only produced 220 hp and 304 ft. lb. of torque.

HOLY HATCHBLAST! 200 HP-sauced Fiesta ST gets our nod as CAR OF THE YEAR!
The polarizing flagship of luxury that is Infiniti’s expansive QX80 Limited