But in the fall of 2013 I secured some quality seat time in a certain AWD Italian road beasty. The aforementioned destroyer of roads, Lamborgini’s 700 hp Aventador, was allowed the opportunity to enlighten and frighten me with its 2.9 second 0-100 km/h time and its brutally honest, punch you in the back of the head acceleration.

The setting and start point for the Aventador encounter was a beautiful private residence, located a few miles off the main highway just south of Monterey in California. The event, part of Monterey Auto week and Lamborghini’s 50th Anniversary, attracted a diverse crowd of well monied individuals, dealers, support people and a myriad of green jacketed Lamborghini staff.

Escorted to the house by a gentleman with a law enforcement badge, we were greeted by a cigar rolling Spanish person who possessed obvious tobacco rolling talents. At the back of the house was a full service food station where guests were served fire roasted avocado, chicken, lamb and Brussels sprouts, barbecued by some of the region’s most talented, tattooed chefs.

And like most all official Lamborghini events, CEO Stephan Winkelmann was in attendance, schmoozing the crowd as was good friend of ours, Design Director Filippo Perini. Like Gorillas in the Mist we were, except instead of 600 lb gorillas and stifling humidity, there was a $4 million Veneno next to a burnt orange Aventador LP 700-4 next to roast Brussel Sprouts and hand-rolled cigars. But as idyllic the $20 million dollar Monterey view was, we were there to experience that 700 hp ground-attack fighter.

Now Ferrari, with its affinity for fire, has its pretty ponies; Bugatti has its…errr… bugs; Koenigsegg has its herring and Lamborghini of course has its bulls. In a 1993 bullfight in Spain’s Saragossa Arena, a bull named Aventador took on the local matador with enough courage, honour and ninja skills to earn it the coveted “Trofeo de la Peña La Madroñera” title. The phrase, roughly translated means, ‘this cow, it has mad skills.’ 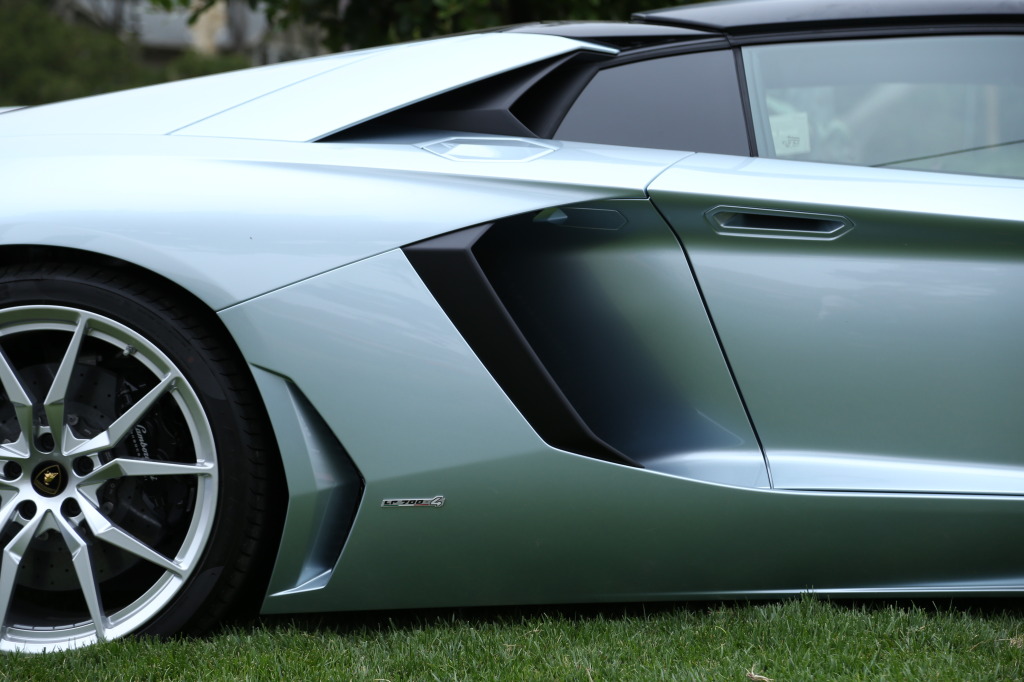 Power being passed down to the massive Pirellis is the stuff of Greek mythology (photo. Angus MacKenzie)

Now for anyone wondering, that 700 in the “Aventador LP 700-4” just so happens to coincide with the insane power output of the 6.5 liter V12 motor. Located behind your head, the 60 degree, 48 valves engine has the ability to produce 509 ft.lb of torque and 691 hp. But didn’t you say 700 hp? Yes yes Philip, I did. The 700 hp is the Euro output figure the company used when badging the car. No harm no foul.

With those figures in place one quickly learns that when the Aventador’s resources are unleashed, that 2.9 seconds to 62 mph (100 km/h) comes on faster than you can say Holy Fuck Ferruccio! That Italian force, which we only got to experience a few times during our short run, can only be described as a raw, controlled violent act.

When I say violence I mean it with the best of intentions. A power/weight ratio of 4.96 lb/hp mid-mounted motivator is not only capable of reducing asphalt to tears, but its auditory emanations are on par with some of Italy’s most famous automotive composers. And even though it needs a track to be fully appreciated, the power being passed down to the massive Pirelli 255/35 ZR19s (front) and 335/30 ZR20s (rear) the power hitting the ground can rightfully be compared to the stuff of Greek mythology.

Exhaust sounds blasting from the V12 go from a very respectable, rather soothing growl at cruising speeds to a deafening cacophony of death metal proportions instantaneously. The Motorhead impersonation doesn’t let up. It just keeps on building and building until redline. Lemmy would be most proud.

Once inside, the externals design details carry over into the cockpit. The seats were surprisingly comfortable, the headroom spacious and the scissor hinge doors made ingress and egress reasonable for a supercar. The bulk of the car’s controlling switches and buttons are located on a raised console while a military style start button hides beneath a red safety panel. Just below the seat heaters are the three driving mode buttons and to the left of the steering column there are recessed switches controlling various interior and exterior lighting functions. 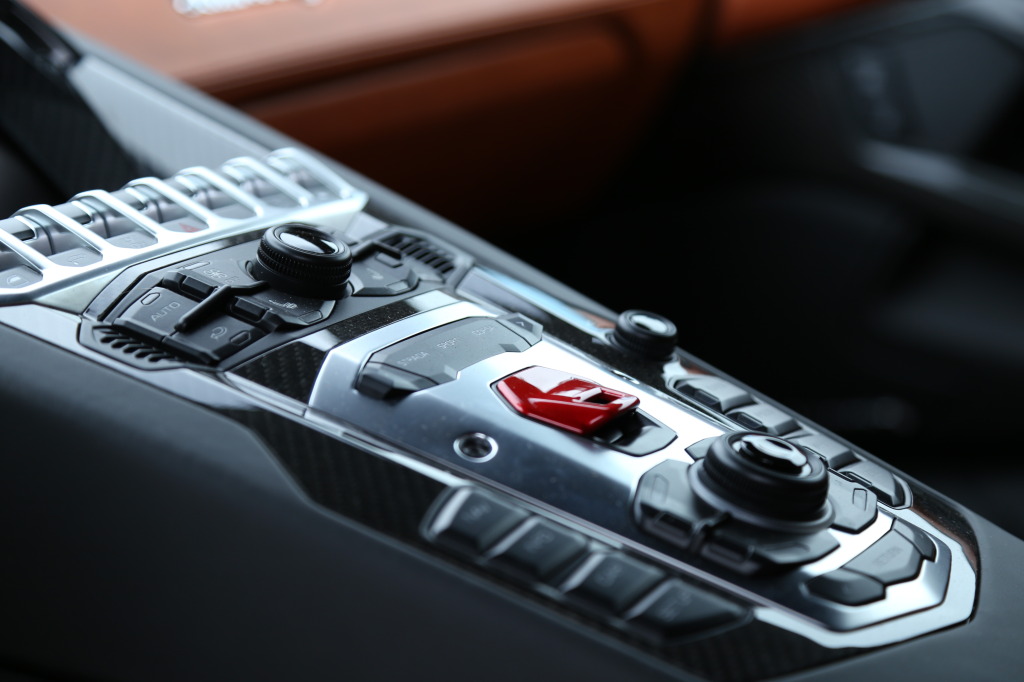 Driving modes; Strada, Sport and Corsa, present the driver with three varying performance options. As Stephan Winkelmann recommended Corsa, so once firmly behind the wheel of a shiny Royal Blue Aventador I dialed the gearbox, differential and engine into their maximum performance settings. In Corsa mode from a rolling start, the gearbox was lightning bloody quick through the changes, engine response was tighter while the suspension remained serious. There is zero room for subtlety amongst the hexagons and carbon fiber of the Aventador.

The Aventador’s transmission was much improved over the Gallardo I drove years back. Shifts off the paddles were lightning quick at 50 milliseconds between gears … faster than both the Gallardo and outgoing Murcielago. The new 7-speed ISR gearbox is also lighter and smaller, which when combined with the 60 degree banked V12, translates into a more compact powertrain arrangement and a lower profile.

1st to 2nd to 3rd gear was an exercise in controlled violence. Visions of the Millenium Falcon jumping to hyperspace come to mind. Even though the gods of Lamborghini made 7 gears available to the world, we were unfortunately only able to experience four of them due to speed restrictions and the copious amounts of doddling SUVs.

So what’s the verdict on the all-wheel-drive. It was hard to say given the regional speed limits, traffic conditions and brief seat time. But except for a slightly heavier feel from the nose, it was difficult to feel any discernible difference between Lamborghini’s Haldex AWD electronic control system and a rear wheel drive setup. On launch, and a few longer sweepers, the car did feel as if there was added grip coming from the front. Steering feel was heavy but direct and the car did bind a bit under tight turns. The ride however for a supercar of this caliber was surprisingly compliant. 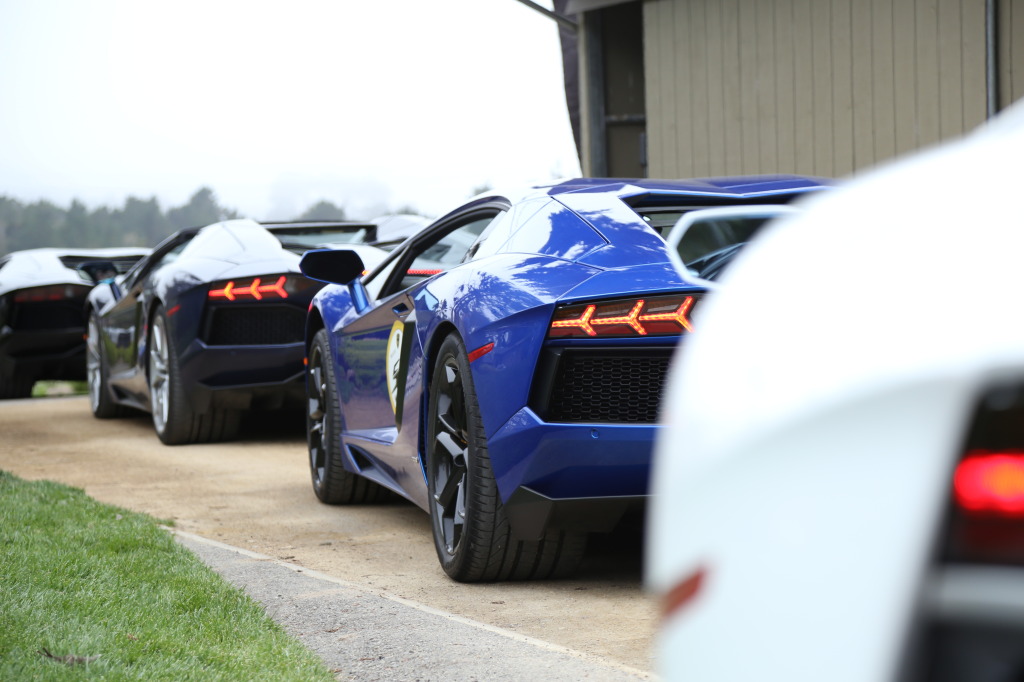 At speed, the car handled like it was on the proverbial rails, almost mocking me to push it harder. The Aventador’s weight distribution of 43 percent up front and 57 percent in the rear gave the car a relatively neutral cornering attitude and planted stance. But with the wife swearing in my ear like Mr. McGinnis on a non-functioning Toro mower I decided to keep things relatively civilized.

The car’s pushrod suspension, borrowed F1 racing technology, is pretty special stuff. What makes this setup so special is that it aids in reducing unsprung mass (anything on the car not supported by the suspension – tires, control arms, brake components, etc.), while simultaneously improving underbody aerodynamics and cutting down on unwanted road feedback to the steering wheel. This race inspired system made for a ride where the Aventador felt confident and magnetized. Steering feedback was firm and direct, but not overtly obnoxious for a supercar. So whatever the pushrod suspension was supposed to do, it did rather well.

The brakes, as with everything else, were extreme. At almost 16 inches (400 mm) across on the front, the massive carbon-ceramic discs appeared more than capable when the need arose. Performance-oriented 255/35 R19 tires manage steering and partial power to the front wheels, while earth moving 335/30 R20 shoes on the back end deal with acceleration and power transfer.

My blue 700 hp AWD steed awaiting its turn at the roads just outside of Monterey (photo. Angus Haggis MacKenzie)

The Aventador’s AWD system splits 70 percent power to the rear wheels under regular driving conditions, leaving 30 percent of the 691 hp, or 207 hp for the front wheels. Thus when the Aventador runs into less than ideal conditions the Haldex system pulls a socialist move and splits power out more evenly to all the wheels…rear wheels then only receive 40 percent.

But as Filippo Perini noted, to fully appreciate the Aventador and its AWD system, it really needs to be run out on track – under wet or dry conditions. For us Canadians, it’s good to know the Aventador’s all-wheel drive system is there and ready to tackle our harshest winters, mudslides, floods, Timbit runs, locust infestations, etc.

Dissimilar to a Nissan Leaf in most every way the Aventador is unlikely to win any sustainability awards. However at speeds under 84 mph (135 km/h) or under light loads, Lamborghini’s new Cylinder Deactivation System (CDS) system shuts down one cylinder bank, or six cylinders. Losing six cylinders would be problematic for most cars, but with 350 hp still on tap, the Aventador has no trouble maintaining cruising speeds with six left over. The system was so clandestine that the difference between six and twelve cylinder activation was imperceptible. According to Lamborghini the Aventador’s fuel consumption, never a great conversation topic around supercar manufacturers, improves seven percent to 16 liters/100 km under “average” use thanks to the new CDS system. At cruising speeds of around 80 mph (130 km/h) the company reports a further reduction of 20 percent in emissions and fuel consumption.

Where ground squirrels and water fowl fear to tread

Starting at US$400,000 the Aventador is anything but affordable, so is it worth the near half-million dollar asking price. In the supercar context where the Bugatti Veyron exceeds the $1 million dollar mark and Sweden’s Koenigsegg Agera R tops out at $1.6 million, then yes, the Lamborghini is good value for the money. In comparison to say Nissan’s US$100,000 giant killer, the GTR, then no, the Aventador is a silly acquisition. In the end it comes down to which side of the financial fence one sips their mojitos on.

Yes the Aventador has all the pre-requisite new age technology, engineering and carbon fiber elements, but it also retains a genetic rawness from the early days of the Countach and Miura. Exuding analogue overtones and albeit not the purist experience of old, the Aventador is still a technological, carbon fiber marvel that communicates its old-school Italian narrative brilliantly,

*this story originally on gizmag.com

THE ART OF CREATING VISCERAL, CYBER-PUNKISH VIDEO GAME ENVIRONS
To stud or not to stud, that is the question! Whether it is nobler in the mind to suffer the outrageous roads of ice & snow, or to mount concept tires against the frozen paths of struggle & woe