It’s interesting how a little automotive context will shape opinions; as it turns out I’d been a fan of McLaren since the 1960s. Before McLaren became synonymous with Formula 1, and before the release of the iconic F1 supercar in the 90s, there were slotcars. Yes you heard me, slotcars. Going through some old Kodaks, I realized I’d in fact been driving a scaled down, electric McLaren back in the early 70s.

My car-of-slots choice was a McLaren 8MD, of which I believe, I consistently relinquished the checkered flag from my younger, slower brother in his Porsche 917. But now the idea of driving a life-sized 616 horsepower McLaren 12C Spider, easily brought back black and white memories of cold basement floors where the smell of ozone, overheated transformers and oiled down Strombecker slotcar tracks permeated the air.

Okay, before we get into the fantastic brilliance that is McLaren’s 12C Spider, let me go on record by saying until now, Ferrari’s F430 was top of my list for road attack vehicles of an exotic nature. No more. Not only is McLaren’s F1-inspired 12C light years ahead of anything I’ve ever driven in respect to suspension adaptability, power management and gearbox performance, it’s also a legitimate urban commuter that could conceivably be used as a daily driver. 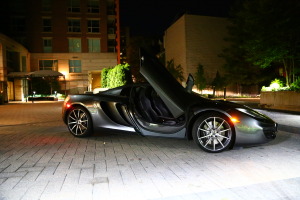 Showing off the dihedral doors in Yorkville

The ride, courtesy of McLaren North America was part of an experience celebrating McLaren’s 50th Anniversary. Nothing solves a mid-aged crisis like a 600 plus hp McLaren genetically modified with Formula 1 nutrients.

As brilliant as the car is there are a few minor complaints, which in no way would deter me from acquiring an MP4-12C. One issue is the myriad of control stalks on the steering column. In total McLaren has placed six levers on the column, three per side, not including shifter paddles. The shift paddles by the way, are positioned at 3 and 9 o’clock. For someone who is used to driving at 10 and 2 like myself, this position requires some adjustment, otherwise you’ll find yourself continually having to move your hands down the wheel to blip the gearbox.

Another minor issue with the 12C is the unconventional steering wheel design. Beautifully wrapped in leather with carbon fiber spokes, it’s ideal for guiding the 12C about, but the grip of the wheel is for some reason tapered on the trailing edge. I’m not sure of the rationale behind the design, but after 48 hours I found it to be oddly uncomfortable. But on the positive side, the 12C’s variable-rate, electro-hydraulic rack and pinion steering setup, in my opinion, is as close to perfection as one can get in a road-going supercar.

But any minor concerns vaporize like so many blurred road lines as soon as McLaren’s award winning twin-turbocharged M838T V8 engine is let out of the yard. Featuring over 1,100 bespoke parts, the all-aluminum engine specifically designed for the 12C weighs just 440 lb. Thanks to a dry sump oil system and a flat plane crankshaft configuration, the mid-engine V8 sits low in the body giving the car a relatively low center of gravity. The 3.8 liter engine produces 616 hp with 443 lb.ft of torque and according to McLaren, the car has 80 percent of peak torque available below 2000 rpm. Another reason why the 12C’s power band is so absolutely huge. Did I mention the car has a top speed of 329 km/h (204 mph).