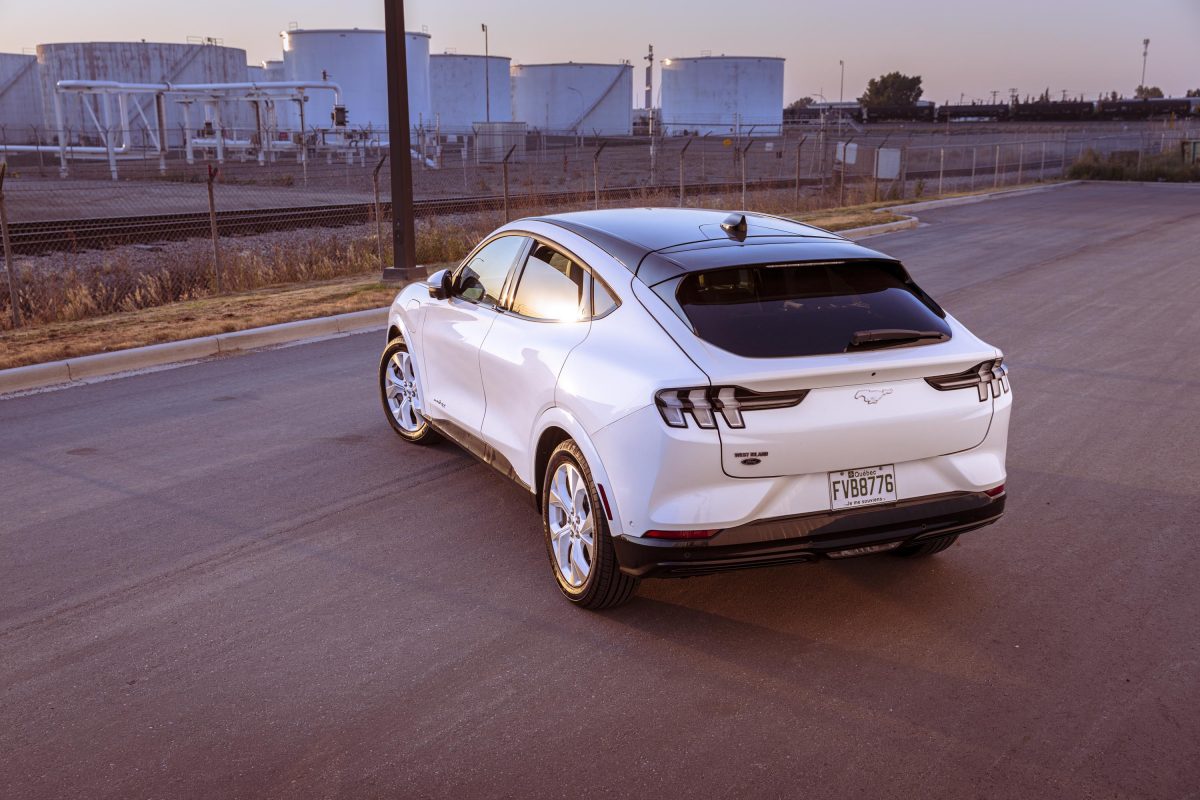 There are those in Middle Earth marketing that have fought for years to shift the gaze away from the marketing/cannibalism/naming ploy of the faux-stang that is the Mach-e. Those men of naming can now rest easy as the eyes of Sauron are now firmly affixed on the polarizing design of the next generation Camrochargastang, Or Gen 7 Mustang.

While the masses throw their cups of design commentary at the Gen 7, we here will focus instead on the electric goodness of the Mach-e 4X.

There’s a Seinfeld episode where the attractiveness of Jerry’s date varies significantly depending on the lighting. Our AWD Mach-e 4X, decked out in Ice White, puts down sweeping dynamic visual cues for the most part but like Jerry’s date, becomes visually ambiguous depending on the angle.

Three-quarter angles down low, front and rear, provides back dam good visual returns. Stylistic points drop when looking down on the car. The backside holds its own but the frontside ventures off slightly into the Seinfeld scenario. But it’s on profile where the entire front end shows as most incongruent. Rising front haunches, unneeded power humps and questionable proportions work to bring the rest of the car down visually.

Stylistically the Mach-e is a first-gen winner with the exception of a few missed opportunities.

Now where some might see the Mach-e faltering visually, its seamlessly quick, all-electric drivetrain is there to quiet even the most amateur of design critics. With 0-100 kph times of 5.1 second, 346 hp and 428 ft lb of torques available at all speeds makes the Mach-e an all round blast. Off the line be electric quick. Mid-range power still there. Passing or accelerating both excellent. Higher speed powerings start to dwindle off as they do but most drivers wont’ be doing what I do.

Comparatively speaking, the Mach-e is not its cousin, but rather a surprisingly agile cross-over. In that context the e handles extremely well for what it is. Body roll is there as is understeer but in terms of overall handling, body composure remains strong thanks to nicely dialed in suspension selections. Steering earns solid marks for low and high speed feedbacks. The Mach

Range estimations from Ford put the Mach-e at 488 kilometres per charge. Power is provided by front and rear motors charged by a 68 KWh battery. I only needed to recharge once during my week long test. Finding a fast charge station after trying to download and charge up on a couple of slow charge providers was a curse word populated festivus. Definite downside here to the gas-now-and-go scenario vs the wait 45 minutes to 9 hours charge options.

More spacious than your typical Mustang, the electric crossover offers up premium seating and ample leg and headroom. Rear seating and storage space beat the typical Mustang hands down. Plus Frunk. An oversized iPad similar to Tesla’s provides the most all key information. Plus doubles as a digital doodle pad for younger persons or NFT artists to pass the time while charging etc. Heating, fan speed, radio, nav, charge monitoring reporting etc all available from the big white board.

Mach-e also has three drive modes; Engage, Whisper and Unbridled. In Unbridled, the car simulates downshifting as in a standard geared car, increased throttle response, engine braking, tighter more responsive steering feel, and enhanced driving noises. Which, for an electric car, is at least something but still not the auditory pleasurings of a 5.0L V8. Whisper mode is exactly that – quiet with less aggressive acceleration and braking, interior “engine” sounds turned off and a calming blue light to mellow you the fudge out.

One of the coolest tech performance enhancing bits on the electric Mustang has to be One Pedal Drive. When engaged via the giant whiteboard, the driver need not bother with the brake pedal. For the gods of momentum stopping provide overwatch and brake for whence the throttle pedal is released. Clever yes but it’s how it emulates engine braking to that of in a standard geared, petrol powered motor car. Simply an amazing feat of forward thinking tech carrying over old-world performance trickery. Absolutely love it.

Ford notes it should not be used to replace traditional braking but rather help driver’s in stop go traffic situations or similar. I’m gonna guess there are drivers who’ve put too much faith in the tech and ended up in someone’s trunk space.

Starting price $60,000 CAD with our testing pricing out just over $62,000. For the money I’ll take the Mach-e over the questionable reliability of a Tesla any day. Fun and quick

Go drive. See for your self.