Overall the 12C Spider weighs in at 3,033 lb – not super light, but still very much acceptable. A weight distribution of 42 percent up front and 58 percent at the rear makes for an old-school rear engine weight bias that translates rather well under spirited ventures. Measuring out at just under 4 feet tall and a tad over 6 feet across the hips 14.7 feet long makes ingress and egress interesting. However these svelte specs translate into a car that feels very much like a track-bred piece when prodded politely.

The 12C’s 7-speed gearbox is another bit of race-inspired brilliance. The so called “Seamless-Shift Gearbox” apparently pre-loads the next gear, which in turn delivers some of the fastest, and most seamless shifts I’ve ever experienced. Driving about Toronto’s varied urban and country roadways allowed me to try the gearbox out in its many settings. In partner with the V8’s expansive power range, the gearbox is fantastically adept at throwing out lightning shifts in performance mode when called upon. And trust me, I called on them a lot during my time behind the wheel. 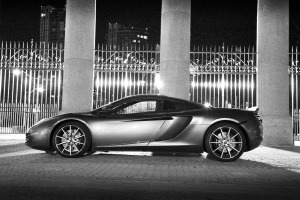 Out by the city’s industrialized waterfront area I had the opportunity to try the engine and 7-speed gearbox out in a more spirited fashion. With 0-100 km/h (62 mph) times of 3.3 seconds (3.1 on Corsa tires) the 12C communicates power so directly and effectively that you can almost hear Bruce McLaren giggling like a school girl as the car revs up to 7000 rpm.

An added bonus is the near complete absence of turbo-lag. McLaren says it achieves this seamless boost using one turbo bank that’s adjusted to come on a little earlier. Unlike a sequential turbo arrangement, the 12C system uses both smaller turbines, which spin up faster and support higher RPMs, and slightly different wastegate adjustments. This setup that feels like “pre-spooler” technology makes turbo-lag, the evil power procrastinator, almost non-existent.

The other side of the 12C’s gearbox/engine persona is the diversity and range it brings to the table. Driving up and down Toronto’s Bay Street flaunting my ride with the gearbox in auto-mode, I found the car could easily be used as a daily driver. Unlike other exotics where gearboxes are anything but well-behaved in auto-mode, McLaren seems to have done the impossible and made a performance gearbox that could easily be mistaken for something out of a Mercedes or BMW.

Further to the 12C’s long list of desirable traits is McLaren’s Proactive Chassis Control (PCC). Developed in Formula 1, the PCC system is comprised of linked hydraulic dampers that adeptly manage the car’s roll and ride stiffness, enabling the 12C to transition from an agile thing of beauty, with flat supercar handling characteristics, to an inner city commuter capable of handling imperfect roadways with comfort and ease.

Angus: Lamborghini is a global supercar brand, but we notice that you are quite close to many of the ...