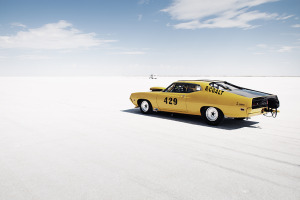 Following a trip to Utah’s World of Speed.in September of 2012, french photographers Pauline Bellocq & Julien Roubinet, decided to put a book together capturing the cars and bikes of  the Bonneville Salt Flats. The book was part of an Indiegogo campaign, that easily exceeded its goal.

These are just some of the images from that book.

You can see the magazine feature in all its expansive glory here on issuu.com