Chevrolet’s Impala has gone through several iterations since its introduction in the late 1950s…some good, some boxy, some excessively bland

However after 10 days of driving the redesigned, re-engineered 2015 Impala LTZ I found myself to be pleasantly surprised at how well Chevy had reinvented the package. A bit of history, the clan MacKenzie has over the past 45 years owned more than a handful of Impalas. From a near matching set of rear wheel drive utilitarian models in the early ‘80s to a beautifully styled third generation model in the 1960s. So it was with that bit of automotive genealogy that I chose to review the latest version over ten days last October.

Stylistically when comparing the 2015 Impala to its ancestors this current generation is definitely one of the stronger designs of the last 30 years. This is especially true when compared against the 7th generation bubble-era Impalas of the mid-90s (a favourite of the low-rider demographic), or the aforementioned box-on-box design of the early 1980s, and the shamefully crappy, low-quality, rebadged, Malibu’s of the early 2000s.

Even though their subtle, Chevrolet’s design team saw to retain some of the original model’s styling in the new ride. One original detail can be seen sculpted up and rising out of the rear door into the hindquarters. This waistline detail also perfectly ties in with a chiseled line that starts out at the top of the headlights, carries over the front haunches, through the driver’s door handle, dissolving just before the rear door handle.

The roofline finishes beyond the rear axle point, but the tapered rear window treatment finishes out almost exactly over the rear axle point. The Impala’s hood looks to borrow design cues from the Camaro, as does the relatively short overhang up front. Overall the Impala scores major points for its long masculine lines and well-rounded proportions. 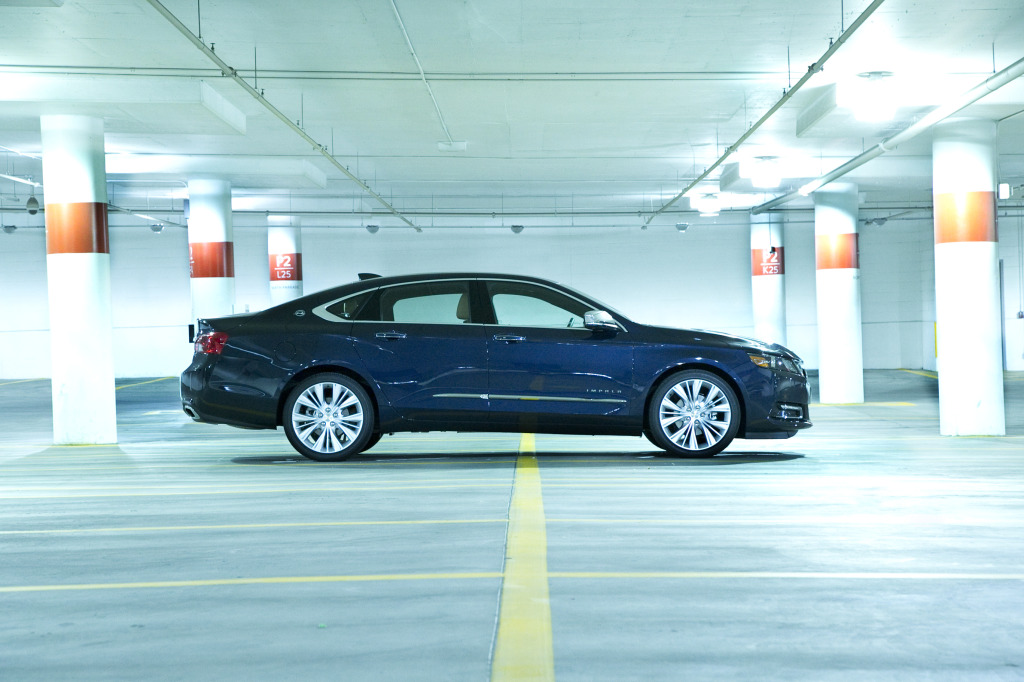 At 3,700 lb the Impala isn’t light but holds its weight well

Now not only is this flagship one of the best looking models in GM’s dysfunctional arsenal, it’s also been extremely well received by the kids at Consumer Reports. In 2013, CR scored the 2014 Impala 95 points in the sedan category. This remarkably high score is impressive not just for coming in second after Tesla’s Model S with 99 points, but for the shear fact the car was consistently ranked one of the worst cars of the last ten years!

Moving on. Inside the monolithic saloon, Chevrolet has done a top notch job with fit, finish and materials. The leather seats were comfortable yet supportive, while there’s enough space in the back to fit three adults with ease. Storage and carrying capacity is impressive with over 532 L (18.8 cu.ft) of cargo volume and a trunk spacious enough to hold three sets of golf clubs and the caddy if needed. The sound system, infotainment unit and overall interior ergonomics were good, as was headroom, legroom and finish.

On the safety front, our Impala LTZ is loaded with just about all the safety gadgets GM could muster. Forward Collision Alert (FCA) and Front Automatic Braking (FAB) systems were both integrated into our tester. Using a high resolution camera the FCA system will flash red lights on the windscreen via a HUD display while sounding a crash alarm. In daily use, the system definitely worked well to get my attention both aurally and visually.

Using forward seeking radar, the Front Automatic Braking system (in combination with the Adaptive Cruise Control) warns drivers of slowing or stopped vehicles in their lane. The system is also active, so if it senses braking isn’t being managed quickly enough in a collision situation, then the FAB will step in and automatically activate the brakes.

The lane departure system worked to keep the car between the lines when the program was engaged, but I did find it to be overly sensitive in certain situations. Given the length of the Impala, the rear camera display, with its peripheral warning sensors, was a most welcome addition in identifying oncoming vehicles or cyclists when backing out of a parkade full of SUVs.

Chevrolet has also incorporated its new 4G LTE Wi-Fi hotspot system into the car. This essentially turns the Impala into one big rolling hotspot, capable of feeding wireless to up to seven devices, such as smartphones, tablets and laptops. 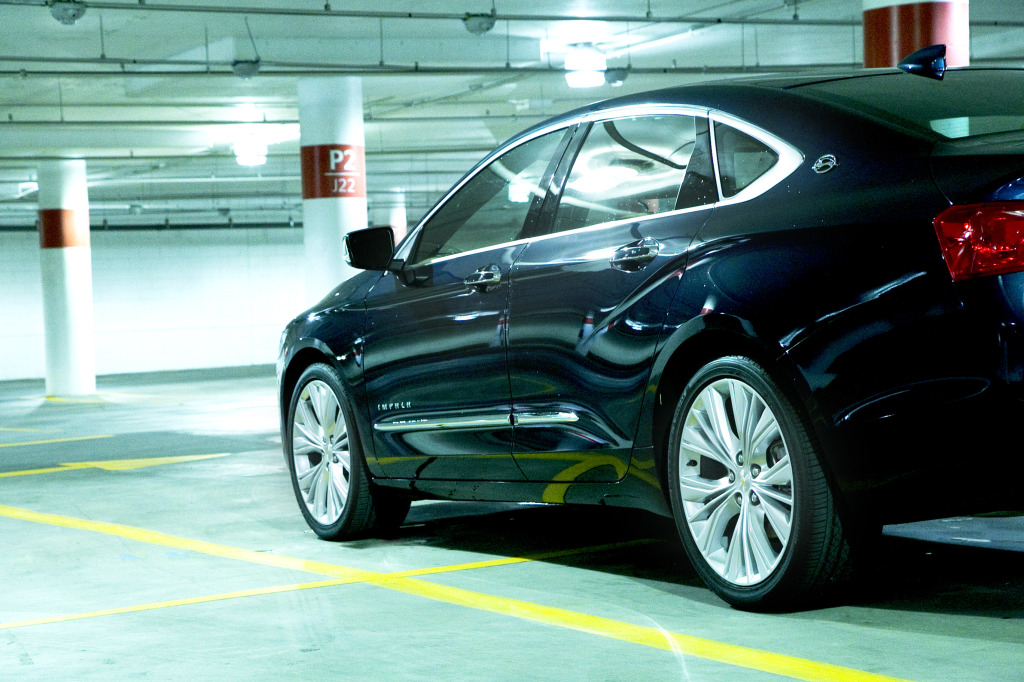 While the car makes a strong, dynamic visual impact, it’s hard to ignore its extensive dimensions. From tip to tail the Impala stretches 16.7 ft (5.1 m), making it as long or longer than most SUVs. And you guessed it, parallel parking was no walk in the park and I avoided it whenever possible. On the plus side, finding the car was easy thanks to its cruise ship dimensions. The big chunky A, B and C pillars also raised blind spot concerns when lane changing or maneuvering in parking lots, although lane-changing issues were mitigated by the side mirror blind spot sensors.

On the scales, the flagship is also anything but light – at 3,867 lb (1,754 kg) it’s not as heavy as a Mercedes-Benz S-Class, but the anytime you start pushing 4,000 lb you really need to look at the number of crullers and croissants you’re eating every morning.

However, like a reasonably conditioned heavyweight fighter, the Impala still somehow managed to move about the roadways like a Euro-sedan. The ride was smooth and solid on most terrain. On the highway out west near the Rocky Mountains, the winds are legendary for being less than friendly to most anything on wheels, but the Impala had no problem maintaining its straight line composure. The car was also surprisingly agile in spite of the weight.

The Impala’s suspension is nicely dialed in for both highway and inner city maneuvering. The large 20-inch rims and rubbers help to keep the car in check when pushed. Steering was overly assisted at lower speeds but translated to a more solid, confident feel at highway speeds and in more aggressive cornering.

While the overall ride was smooth, quiet and comfortable, the suspension did struggle handling large bumps and road irregularities. A disconcerting thud would consistently find its way through the chassis whenever sharp, bitey potholes or similar were encountered. I blame the big 20” rims and low profile tires, not so much the suspension setup for the car’s reactions. 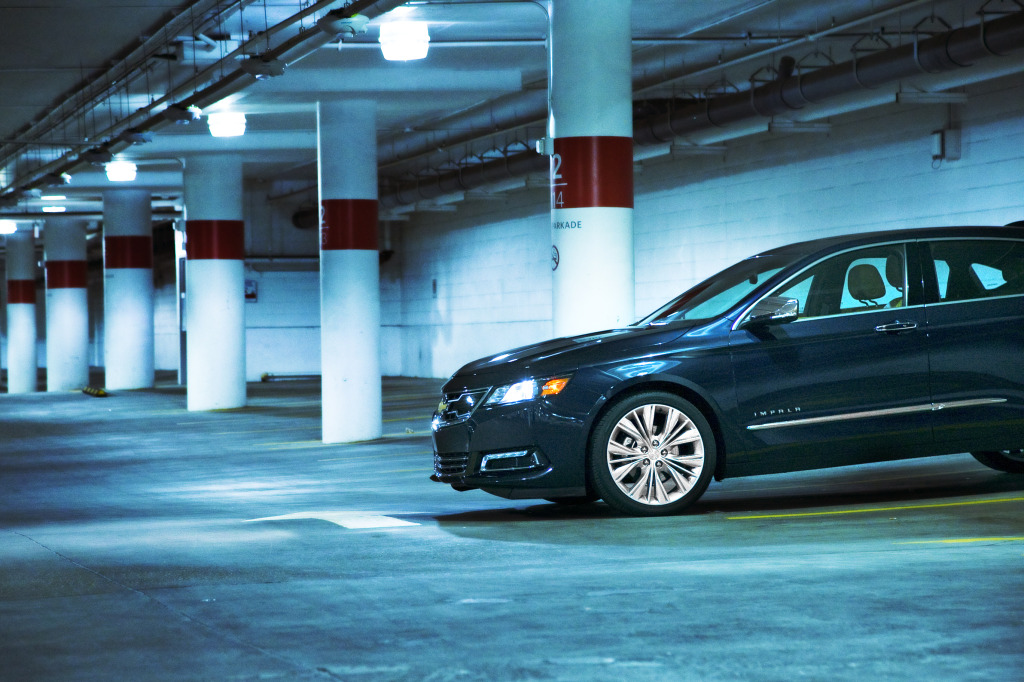 Surprisingly the car scored a 95 with Consumer Reports in 2014, putting it 2nd to Tesla

My biggest complaint about the car was oddly enough the location of the shifter. Perhaps I’m in the minority but when I tried to manually shift the car via the lever mounted switches, I kept hitting my elbow on the console storage box. Plus the shifter is located so far back that to activate the manual features my right hand ended up practically in-line with my hip. But given that the target demographic for this car would most likely never use the manual mode option, I doubt many would notice the ergonomic issue.

Under the Camaro-esque powerhood resides GM’s 3.6 liter V6, connected to a 6-speed autobox. While back-to-front weight bias on the Impala isn’t ideal, the 305 hp V6 with Direct Injection and Variable Valve Timing helps give the car enough power to handle most day to day scenarios. Chevrolet reports mileage figures of 23 mpg (12.5 L/100km) in the city, while on the highway figures jump to a decent 34 mpg (8.2 L/100km).

Chevrolet reports 264 lb.ft of torque is available at 5,200 rpm and acceleration from 0-60 mph (96 km/h) takes 6.8 seconds. Not fast but for a car of this girth, length and weight, those figures are actually sort of respectable. The 6-speed gearbox was dialed in nicely and first-rate in the city. On the highway, the gearbox/engine combination let the car cruise with minimal effort, while keeping reasonably pulling power in reserve for passing.

For the money, the Impala isn’t a bad option when comparing to the likes of the Chrysler 300, Audi A4, Acura RLX, Kia Cadenza or Infiniti Q50.

Photos Words. Angus MacKenzie Every once in a while one gets tired of lugging the 85 lb Canon mit 70-200 ...

Ford Explorer gets a new everything in next-gen configuration

Expediting volumes of anything, anywhere, Ford’s 2020 Expedition (Exhibition) makes a case for the big

Words/Photography. Angus MacKenzie In the world of large transport, Ford’s 2020 Expedition ranks up ...