Yes, the road she is long, and there are mountains in our way, but we climb a step every day

Produced by GM’s Korean and Mexico plants, the Chevy Trax is platformed off the much smaller Sonic runabout and receives its power (in the LTZ variation) from a turbocharged 1.4 liter 4-banger. I like GM’s ecotec engines so it was interesting to see what happens when you stuff a turbo version in a tallish, pugish crossover ute like the Trax.

Producing 138 hp and reasonable torque to the tune of 148 lb.ft, the buzzy powerplant produces all sorts of interesting power responses. Sometimes the mini-SUV felt underpowered showing lethargic throttle response and acceleration, the next it was revving up like a mojito in a blender whence the turbo came online. 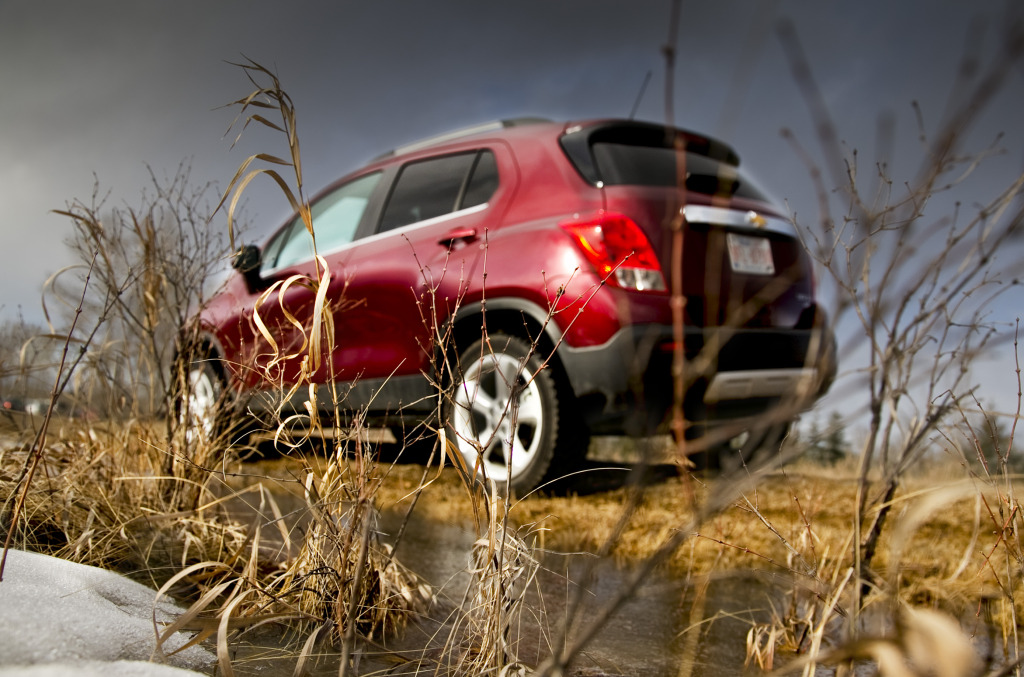 After a while I learned to work the 6-speed autobox in manual mode to better manage the finicky powerband. I didn’t time the 0-96 km/h (60 mph) time but I hear it’s somewhere around the 9.0 second mark. Chevy reports a top speed of 205 km/h, or 128 mph if you live in Utah. Good luck with that.

On the design side of things the Trax is actually not a bad looking soccer mom device, and believe me, I felt like a soccer mom driving it. Not to be sexist or stereotype, but I felt like I should change my name to Cynthia and pick up Timmy from practice at 4:30.

However, living in a cramped market like the Trax does, it does manage to emanate familiar CUV genetics like the others, but thanks to Equinox-like haunches, a tapering shoulder line and stubby overhangs it manages to produce a decent overall aesthetic. The angular hood and tapered-in grill elements give the Trax a slightly aggressive look head on, while the tapering roofline and extending tailgate wing produce an almost European like feel. The European thing isn’t coincidental since the Trax has been selling abroad since 2012.

Driving the Trax in various snow and dry pavement conditions presented an array of observations. Traction was satisfactory in the snow as it would switch from full-time FWD ride to AWD automatically as road conditions required. On dry roads, interior noise was noticeable thanks to the buzzy 4-banger and affixed snow tires. 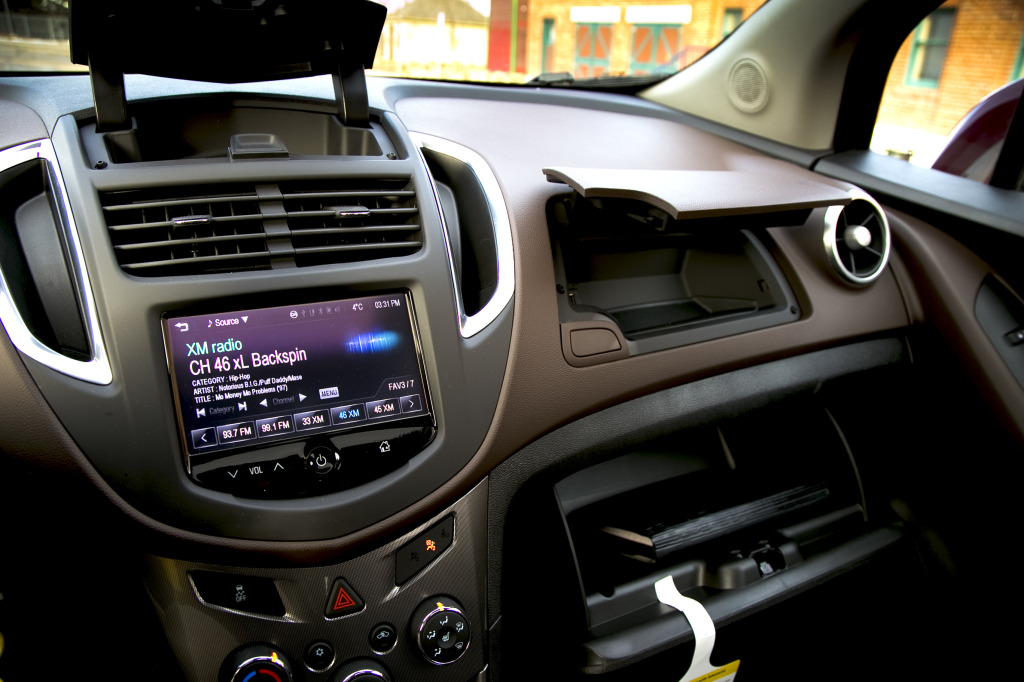 And as in the Equinox, I found the amount of gear hunting required to keep the engine in its sweet spot highly prolific, abundant and irritating. Up down, up down, shift, shift…this is not the first I’ve heard of. The problem, as it were, would be solved easily enough with a nice, fluid 5-speed manual, as god meant 4-bangers to be managed.

Handling was as to be expected, not Cadillac CTS-like…at all. Slightly rolly polly with expected body lean. The back end felt was just ever so slightly behind when it came to keeping up with the front end on quicker transitions.

Ride feedback was good over most road surfaces although the back end lost its composure some when it encountered pothole, chocky terrain. Steering felt overpowered at lower speeds and slightly vague at 100 km/h, but I should mention I had just come from driving Cadillac’s CTS-4 the previous week. Brake feel could use work as early peddle engagement felt distant, which changed to over boost rather quickly. Maybe it was a matter of getting used to a different arrangement after driving the Cadillac. I’m going to blame everything on the Cadillac from now on.

Inside the ute from Europe, headroom and legroom was impressive as was overall storage space. Legroom in the back, not awesome but what can you do. Those looking to haul surfboards will be happy to see both the rear seats and passenger seat in the downright position. 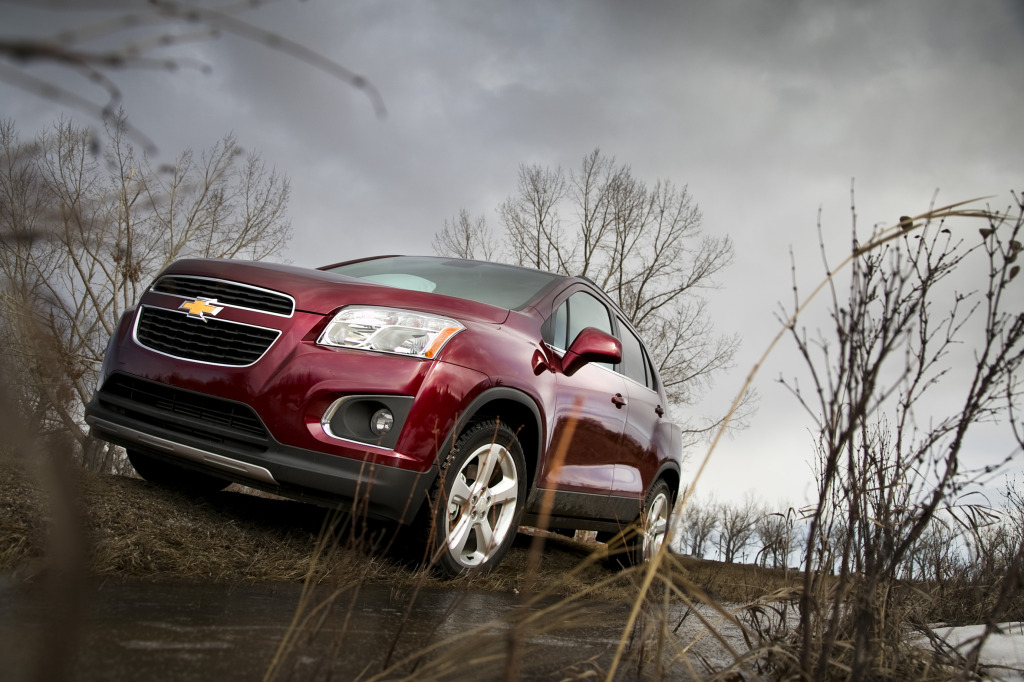 And if you’re into brown plastic then has Trax got a deal for you. Plastic fantastic awaits. Wrapping from the tailgate, around the door panels, to up and over the dash, owners can be assured no rare arboreal trees were harmed in the lining of this vehicle. On the other hand, who wants ArmourAll!

The dash itself is kind of a funky, contemporized design. Despite the cognitive dissonance of the clashing analog/digital gauge cluster, a trifecta of glove boxes and the odd set of vertical cubby holes flanking the infotainment unit, Mr. Trax’s interior scored quality points for ergonomic layout and clean stylistic overtones.

While the Trax is not perhaps my cup of CUV tea, I can see it appealing to a certain demographic of inner-city, soccer loving Cynthias, interested in a domestic product, AWD and a trio of glove boxes. Getting into that $20 – $30k CUV range puts the Trax up against some tough competition such as Mazda’s CX-5, Honda’s CRV, Nissan’s Juke, KIA Soul, and Jeep’s new Renegade.

Pricing for the Trax starts at just over US$20,000 and goes up to a tick over $27k for something like our LTZ optioned tester.

The Trax, it will lift you up where you belong, far from the world we know, where those clear winds blow. I’m sure Joe Cocker, were he alive, would most certainly appreciate the lyrical pairing.