When one thinks architecture, one thinks Florence, Valencia, New York, London, Edson, etc. All are fine in their own respects, if one is into that sort of refined architectural environment. But if its cognitive design dissonance and unexpected surprises on an architectural level, then perhaps Milwaukee is that place of cheese-headed architectural treasures you’ve been in search of all these many years.

Settled delicately on the shores of Lake Michigan, this home to Shotz Brewery employees, Laverne DeFazio and Shirley Feeney, Milwaukee is one of those urban centers that people might only visit on their way to a Greenbay Packer’s game or to Osh Kosh’s most awesome annual aviational event in August. I will say the revitalized social avenue and fish market in downtown Bill Barkee earns major kudos for food, interior design and architectural finishes…sort of along the lines of Vancouver’s Yale district. 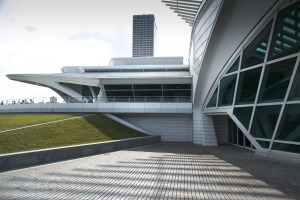 Quadracci Pavilion by Santiago Calatrava is a sculptural, postmodern addition to the Milwaukee Art Museum

So aside from the shrimp Po boy samiches, the city does have one important piece of architecture soaring in its favour; the Milwaukee Art Museum, and in particular, Santiago Calatrava’s Quadracci Pavilion. And it was that rising, soaring, sailplane piece of sculptural wonder by the famous Spanish architect/sculptor that drew me to the mildly aromatic shores of Lac Michigan this past August.

Situated on the south-eastern side of the city’s waterfront, the addition by Calatrava in 2001, was made possible by a $10 million donation from Betty and Harry Quadracci. Honoured by the National Council of Structural Engineers for Outstanding Project and Outstanding Structure by the International Association Award for Bridge and Structural Engineering in 2004, the pavilion albeit 13 years old now, is an amazing blend of art and architecture that stands out like fireworks against a mashup of overpasses and linear spaces.

Since its beginnings way back in 1872, the museum has gone through a variety of revisions, mergers and add-ons, with Calatrava’s Quadracci Pavilion, circa 2001, being the most recent. According to the MAM, the “341,000-square-foot Museum includes the War Memorial Center (1957) designed by Finnish-American architect Eero Saarinen, the Kahler Building (1975) by David Kahler, and the Quadracci Pavilion (2001) created by Spanish architect Santiago Calatrava.”

When elemente first interviewed Santiago Calatrava a few years ago we learned he is one of those rare architects that considered himself an artist/sculptor as well as an architect. This sentiment is clearly communicated in projects like the iconic City of Arts and Science in Valencia  as well as the Grecian helmeted Auditorio de Tenrife in Spain.

Using something called a ‘pencil’ Calatrava spoke of employing old school methodology of manually drawing out his initial creations on paper first in order to properly communicate his artistic intents. Like most artists, Calatrava has a signature style and relies on specific design elements that can be seen in many of his projects. 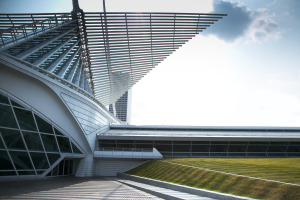 Quadracci Pavilion (2001) the first US work by the spanish Calatrava is a sculptural, postmodern addition to the Milwaukee Art Museum

From the lakeshore, the soaring marine-like design, gets its inspiration from nature and features a transformable, wing-like ‘brise soleil’ which is French for sun deflector. The 115 ton steel brise soleil is comprised of two equal length wing elements, each of which features 36 fins whose length varies between 8 and 32 meters. The entire structure weighs 90 tons and takes 3.5 minutes for the wings to open or close. Sensors on the fins continually monitor wind speed and direction, so that if winds exceed 23 mph for more than 3 seconds, the wings will close automatically.

From MAM, “The pavilion is Calatrava’s postmodern interpretation of a Gothic Cathedral, complete with flying buttresses, pointed arches, ribbed vaults, and a central nave topped by a 90-foot-high glass roof. The hall’s chancel is shaped like the prow of a ship, with floor-to-ceiling windows looking over Lake Michigan. Adjoining the central hall are two tow-arched promenades, the Baumgartner Galleria and Schroeder Foundation Galleria, with expansive views of the lake and downtown.”

According to Santiago Calatrava, “in the crowning element of the brise soleil, the building’s form is at once formal (completing the composition), functional (controlling the level of light), symbolic (opening to welcome visitors), and iconic (creating a memorable image for the Museum and the city).”

The expansive morphing sail has the ability to stretch out from its protective state to a wingspan of 217 feet (66 m) covering the arched, glass slotted structure during the day. At night or during lousy weather, the morphing deflector is folded away. In the YouTube vid you can see how the wings open and close in an angelic or Mothra like manner, completely transforming the structure’s visual presence.

According to MAM, Calatrava’s original inspiration for the 142,050 sq/ft Quadracci Pavilion came from an earlier project by Eero Saarinen, Milwaukee’s topography and Frank Lloyd Wright’s Prairie-style architecture. As Calatrava states, “I had clients who truly wanted from me the best architecture that I could do. Their ambition was to create something exceptional for their community,” notes Calatrava. “Thanks to them, this project responds to the culture of the lake: the sailboats, the weather, the sense of motion and change.”

The next time you’re floating by on your way to Greenbay, dock up at the Quadracci Pavilion and check out Calatrava’s spectacular MAM addition .