This was the invitation from Frank Stephenson, Design Director for McLaren way back in late 2012. Frank had magnanimously invited me to the launch event for the much anticipated successor to the F1, the new P1. Felt this was a great time to meet with the award winning designer, whose credentials include the; Maserati MC12, Ferrari F430, FXX, Enzo, some Fiat stuff, and most recently the MP4-12C and 12C Spyder. The guy has skills. Oh and he was responsible for the redesign of a lesser known miniature icon in early 2000s: the Mini. So 17:45 hours then, at the McLaren booth in Paris. Got it.

Unfortunately I hadn’t planned to be in Paris, my passport had expired and the show was the next day, and…you get the point. But was nice to get an invite. But beyond my inability to be an attendee at the big francais Show I did manage to do the impossible and pull hi-res images of the P1 off the interwebs. Impressive right. If you close your eyes you can smell the fresh croissants toasting on the engine deck. 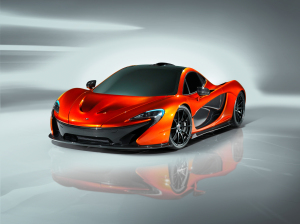 Since 1963, the year yours truly was dropped head first onto this planet, McLaren Racing has been recognized as one of the most successful and groundbreaking teams in Grand Prix racing. The firm has created some of the most iconic Formula 1 cars in the game with more than a few wins on track.

And what McLaren has learnt on track it has brought to the road games in the form of the new 12C Spider and successor to the Gordon Murray designed F1, the P1 concept. This successor to the Mr. Bean driven, gold plated F1 has been emboldened with the task of not only surpassing the car that redefined supercars in the ‘90s but dealing with a new batch of hyper-exotics in the form of the Veyron, Pagani Huayra and upcoming Ferrari F70. No pressure.

The intensely oranged P1 at the McLaren Booth is not a production model but rather a ‘design study’ concept vehicle put on display to tease the world. And tease it does. It’s hyper-exaggerated side scalloping looks to assist high performance brake venting and engine oxygenation/cooling, an F1 influenced low arcing roofline melds nicely into an extended engine basin that encases the yet to be determined powerplant and hides the massive hidden rear wing. Oh and there’s what would appear to be copious amounts of carbon fibre all over the damn place.