Jaguar’s F-type, successor to and loosely based off the iconic E-type, is anything but a rehashed piece of British pop culture.

The award winning machine has rightfully been acknowledged as a brilliant new take on one of the industry’s most famous rides. Following on from my time behind the wheel of a gorgeous 495 hp F-type V8S roadster a few months back, I recently had the opportunity to drive the less powerful (but equally gorgeous) 380 hp V6S Coupe version. So how did the car hold up to the V8S in terms of performance and value?

My tester, a 2015 F-type V6S finished out in Ultimate Black with 20-inch Tornado silver wheels, were a stunning piece of old meets new-world British design. In the newly redesigned kitty, Jaguar has done an outstanding job at using aluminum en-masse when constructing the car. Stylistically, much has been said about this piece of British loveliness, but does it live up to the label of the new “most beautiful car ever”? It just might.

That long fast roofline that runs from the base of the windshield unhindered to the tail is only made more resplendent by the raucous, rising fender treatments and tapered, narrowing cabin.

Side by side with an E-type you’d be hard pressed to pick which is the more impressive. The car’s lines give such a visceral sense of tension and speed that it looks like it’s being pulled and stretched from the back while trying to escape its cage. 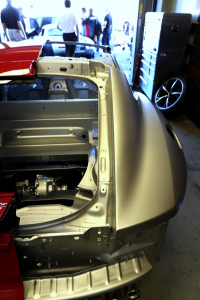 Power to cat’s ample rear comes courtesy of Jaguar’s 3.0 liter supercharged V6, good for 380 hp at 6,500 rpm and 339 lb.ft of torque at 3,500 rpm. In comparison to the V8S, which has a 115 hp advantage and 121 lb.ft more torque, the V6 was surprisingly quick. When accelerating, the torque and power loss is definitely noticeable, but not to the point where it detracted from the experience. Not surprisingly, keeping the car in its power ‘sweetspot’ requires more frequent shifting from the gearbox or driver as compared to the V8S. Nothing excessive.

In a 0-60 mph (0-96 km/h) run, the 380 hp kitty gets through the clock in just under 5.0 seconds – a third of a second faster than the stock 340 hp model. However, put up against its bigger brother, the V6 comes out a half second slower to 60 mph than the V8S. The fact that the 380 hp V6S can’t compete with its big brother on track does have a silver lining though – on fuel the V6S gives the car a mileage advantage of 4 mpg.

The other contributing factor in the handling argument could also be attributed to the coupe’s increased torsional rigidity thanks to that fantastical piece of a roof holding things seamlessly together. And at 3,514 lb (1,594 kg) the slick backed cat is unfortunately not as light as one might expect from an aluminum encased device with a performance mandate.

Other auto-scribers have commented how they prefer the V6S over the V8S when it comes to handling and quickness. With less weight up front, the notion of a quicker handling cat is understandable, however my personal preference still has me much liking the raw, aggressive grunty barkiness of the brasher V8S.

In terms of transmission configurations, the V6S retains the same 8-speed Quickshift ZF gearbox as the V8S, so no complaints there. Gearing in the car is slightly different but few owners are likely to notice. And when blipping through the gears via the brushed paddle shifters, the gearbox gave back nothing but precise transitions, regardless of climbing through the gears or using them for decelerative purposes.

In auto mode I found the V6S to be competent and usable for inner city driving, but I kept the car in manual mode for the majority of the test run, and the Sport Exhaust set to good-kitty. Mid-range acceleration was impressive thanks to the usable power range and well tuned gearbox. On the highway at speed the car had little problem toodling along in eighth-gear with minimal effort.

Like the V8S, the test cat featured Jaguar’s Adaptive Dynamics suspension system. The system, like most other performance rides, lets you pick from friendly inner city suspension to more aggressive stiffiness as the mood suits you. Ride and comfort was excellent when system was set to non-sport mode. Things became clearly stiffer and quicker when sport mode was engaged. Steering feel in the on-center position was excellent as was wheel feedback during speedy like maneuvers. I, being a good person of no fixed faith, of course frown upon speeding….depending on the time of day, humidity, seasonal precipitation, etc. 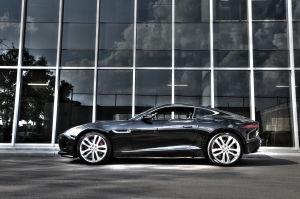 The interior lounging area, where occupants can spend their time contemplating long drives and sipping Grey Goose martinis, is indeed a glorious place. Supportive leather seats put the driver in an environment where neither performance nor luxury overrules the other. The F-type’s steering wheel scores major points as one of my favorites in the industry. The US$1500 Meridian Sound Package did not disappoint either, and the gauges and other infotainment offerings are exactly what one might expect. Proving that it’s both functional and sexy, the Coupe also has 11.65 cubic feet of storage space…if you care.

The black V6S F-type as tested, featuring various trim upgrades and the like priced out at US$92,800. The base model starts out at US$81,000. I still however recommend the jump to the barkier, more powerful V8S, which will only set you back an extra $10-$20k depending on trim levels. *This story originally ran on Gizmag.com