I’d seen Lamborgnini’s just new Huracan in New York last year as part of its North American debut and the NYC auto show. In person, I can attest to the car’s visual impact and dynamic presence but in order to fully appreciate the thing I needed to drive it. Which is why I went straight to the bull’s home in Sant’Agata, Italy last summer to experience the new hurricane for myself. That Lamborghini happened to be on the way from Florence to Venice was no coincidence.

The new 610 hp, all-wheel-drive Huracán, which according to Lamborghini “…is their best street car to date” is not only faced with the task of impressing and converting former Gallardo owners but also has to fight off the likes of Ferrari’s ‘I like fire’ 458 and McLaren’s new 650S. To say a lot is riding on Lamborghini’s new baby is a guaranteed understatement.

On a perfect Italian afternoon on the outskirts of Sant’Agata last June, my Lamborghini contacts graciously set us up with one pearl orange “Arancio Borealis” Huracan. How they knew Arancio Borealis was my favourite colour I know not, all I know was by 7:15 pm that evening I’d be reciting Italian automobilia-superlatives ie. molto bene, stupendo, fantastico, and dinamico like I’d been raised on the Bolognese farm my whole life. 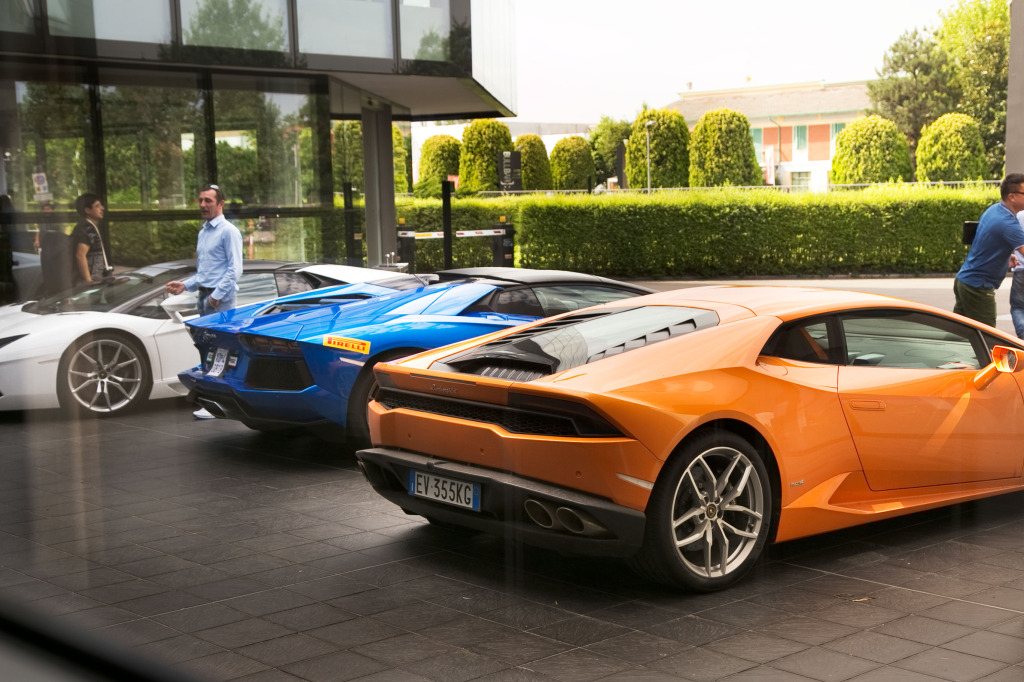 Having visited some of Italy’s most famous cultural and artistic spaces prior to my Sant’Agata visit, I can say the Huracan is a most stunning and dynamically proportioned piece of angular automobilia. To be honest, the Huracán and its fresh dynamic styling almost make the outgoing Gallardo look rudimentary and boxy in comparison…Lego-esque almost.

Stylistically, the angular, hexagonally loaded street-fighter , with its long fluid roofline, beautifully balanced proportions, ubiquitous hexagonal forms and aggressive demeanour, not only works to validate the vision of Lamborghini’s Head of Design, Mr. Filippo Perini, but also validates the manufacturer’s mandate to retain certain DNA aspects of old while bringing new design and technological elements into the mix.

Let’s get the Aventador vs. Huracan comparison out of the way first. The Avendator, which I drove in California has the horsepower edge over the Huracan with 700 vs 610, but the Aventador is also hellishly more expensive at US$440,000. But even if price were no option, the Huracán felt more agile, usable, identifiable and generally more user friendly than its big scary brother.

And weighing in at 1,422 kg (3,135 lb) the Huracán is almost 153 kg (340 lb) lighter than the Aventador, which on paper doesn’t seem like much, but in reality translates into a more intuitive exotic that wants to run with you and not over you if provoked. And for nearly US$200,000 less it’s by far the better “value” of the two.

In our two hours of driving about the Italian countryside on mostly single lane roads, the Huracán showed itself to be not only a worthy successor to the Gallardo, but a solid contender to run against its competitors from Ferrari, McLaren and Porsche. While the limits of the car are clearly beyond the possibilities offered by driving on public roads (and we’re not about doing quarter mile runs here anyway), I pushed the car hard enough during those two hours around Modena and Sant’Agata to feel I had properly experienced its core competencies to a reasonable degree.

The naturally aspirated, ‘Audi-inspired’ 5.2 liter V10 engine throws out a healthy 610 hp to the car’s AWD system and the throttle response is, to quote Daniel Day Lewis’ Lincoln, “Now! Now! Now!” Thanks to a power curve that brings horsepower and torque online way down low in the rev cycle, the Huracán pulls like a bull hit with a wet dish cloth way into the acceleration schedule. Revs build so fast and the car pulls so hard that by the time the next shift comes up for consideration you’re already pushing the speed limit. Power from the growly, tuned V10 was linear across the spectrum and available on call when needed, regardless of the situation.

So back to the gearbox and engine thing. I don’t know the exact nano-seconds between shifts, but unlike the Gallardo’s slushy, gajunky, slow-mo gearbox, the Huracán’s shifts were lightning crisp and fresh through all seven gears. The gearing provides close range shifts down low while at higher speeds the longer gears enabled the baby-bull to stretch her legs with minimal effort. Blasting about a short windy 2 km stretch outside Modena, I needed only the gears 2 and 4 to balance the books. If accounting metaphors aren’t your cup of sailboats, then perhaps Jack White with a nailgun might help colour out the visceral component.

Given the car’s top speed of 325 km/h (201 mph) and 3.2 second 0-100 km/h (62 mph) time one could easily go about harvesting Bolognese wheat with the prow of the Huracán lest one pushed things too far. Fortunately, the Huracán is such a sticky, impressive piece of Italian/German engineering that I never had to transform the car into John Deere mode at any point during the 2 hour drive. 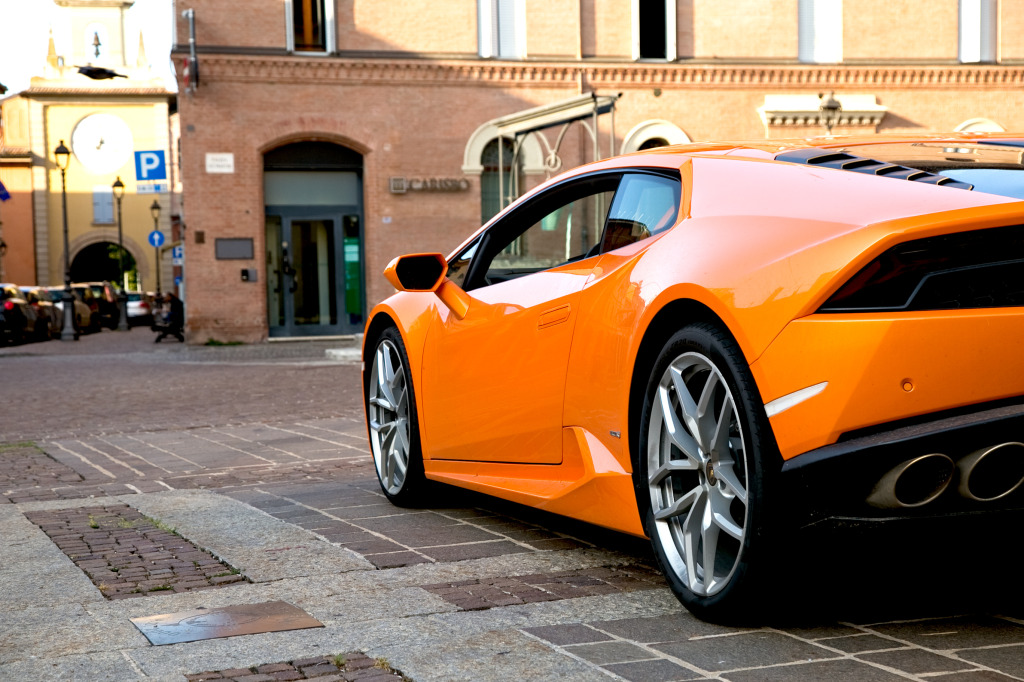 Turn-in and steering response was also nicely dialed in, regardless of the ANIMA mode (Adaptive Network Intelligent Management) setting. In cruising about Sant’Agata not only did the Huracan draw stares from the locals, it felt completely at home as I navigated the narrow streets and alleys looking for idealistic photo backdrops. Although the Huracan pushed and understeered a bit, the AWD system helped pull the car out of corners nicely while straight-line feedback was firm and responsive. Otherwise when it came to navigating Fiats, scooters, small children, the Huracán reacted brilliantly.

How sticky is the new baby bull? Well for starters, it grabs roundabouts and corners about the throats like an 610 hp cheetah on a asphalt-addled gazelle. I did try to get the Huracan’s arse end to come out on a remote traffic circle outside Modena, however the Lamborghini decided instead to teach me a lesson about G-forces and physical limitations. I consider myself to be a reasonably adept driver, but if I pushed the car any harder on that remote traffic circle I realized I’d be out in the Modena mud like a rookie Canadian bull rider. After that, me and the feisty Lambo came to a mutual understanding and where I sat in the man vs. machine hierarchy. I still consider us friends, just one of us is the 600 hp alpha and the other one does the dishes.

In the most extreme of the three driving modes – Corsa; the Huracan’s suspension tightens up significantly, the exhaust becomes more noticeable, gearbox and engine response are enhanced and the all wheel drive system reconfigures the power split between fore and aft wheels. In this mode occupants get to feel every roadway irregularity and highway seam thanks to a more serious suspension arrangement. Ask me to differentiate how the power split change in Corsa mode varies the driving dynamics from the other modes and I’d go into middle distance stare mode.

Getting from go to no-go was handled with ease by the face-pulling force of the big ceramic brakes that were surprisingly smooth and well mannered. Brake modulation and feel was also excellent across the spectrum with more than enough stopping power to handle most occurrences. 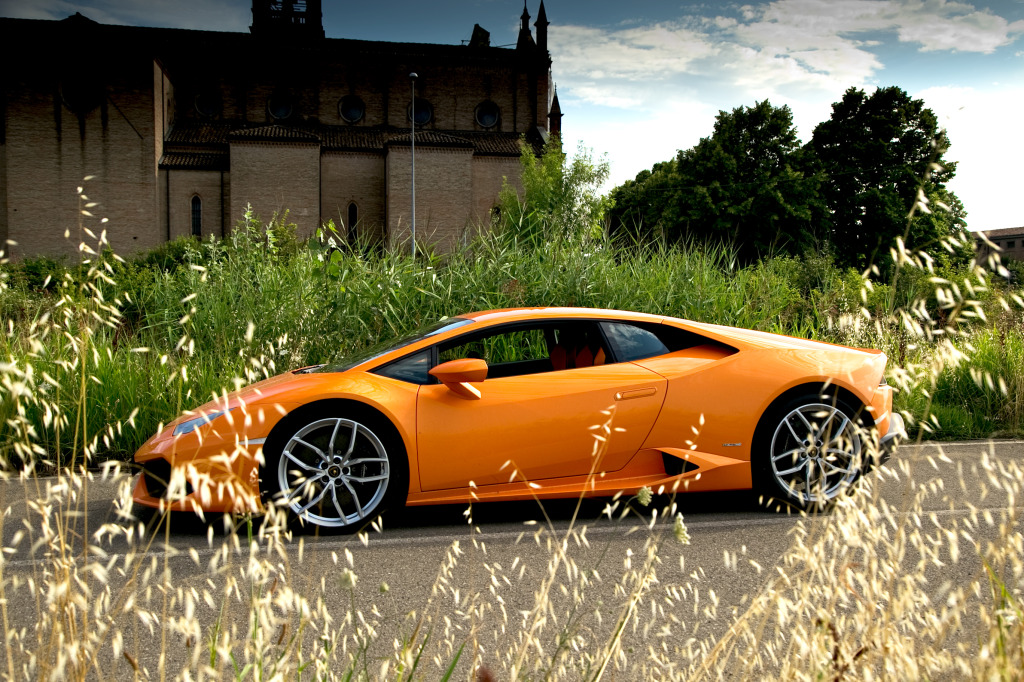 Huracan outside Modena where we battled fearlessly against a remote traffic circle (Photos: Angus MacKenzie)

From the outside, one would expect interior room in the baby Lambo to be constrictive and claustrophobic, but surprisingly that was not the case. Head room and leg room easily accommodated my 6’0” frame and wee tiny head with ease. Maneuvering oneself in and out of the Huracan was easier than accessing/exiting the Aventador thanks to doors that swung outward and not upward. Orange and black seats, beautifully covered in Italian leathers, were firm but supportive and laterally confining when needed.

The Huracan’s steering wheel received strong points for being of a good solid, grabby diameter, with the paddle shifters ideally situated for quick blippings. Visibility out the 4 & 8 o’clock positions meant mirror usage was a must, while reversing the Huracán was something I’d avoid unless necessary.

The big LED dash configuration features Lamborghini’s sexy italicized, sans-serif typographical treatment that’s very similar to font work used in Gran Turismo. The 12.3” TFT instrument panel can be configured in a number of different modes including a split mode where one side displays critical rev, speed and gear information and the other shows the mapping location and route details. The satnav screen can also be set to full screen to provide bigger map visuals, or you can shut the wayfinding stuff down completely and focus on key driving information.

On the down side, the excessive amount of switches and toggles are visually interesting but prove difficult to interpret at a glance. The switch set to the left of the steering column is challenging, but perhaps the worst ergonomic offender is the steering spoke mounted signal switch. Placement is so counter intuitive that I was tempted to throw an arm out the window to indicate my ever changing direction.

To be honest, the Huracán’s abilities exist on a such a more evolved plain than my current driving arsenal. To reach that level of automotive enlightenment I’d need to call in a long outstanding favour from one Mr. Dali Llama & Co. It’s quite clear that to properly experience the Huracán a track would be required in order to fully appreciate its sticky, bullishly quick potential.

On the other hand, there is that set that will be satisfied with simply acquiring the car as a penile extension and for cruising of da clubs. Whatever the motivation, those lucky enough to drive the Huracán are more than assured to enjoy its visual and visceral offerings. The go-fast wedge, aka. the Huracán, sells for approximately US$250,000. My thanks to the outstanding efforts of two of Sant’Agatas finest for making the short drive possible under less than ideal conditions.

Overnighting in Jaguar’s aluminum-cloaked F-type V6S Coupe eh
THIS WAS NOT A TOY!