Back in 2011 I started playing about with the fringe photography form known as “Light Painting”. The relatively simple technique requires no more than a tripod, extended exposures, patience and a reasonably mobile light source. Using this hit and miss technique I managed to capture the following images from one of my favourite automotive/industrial themed graveyards, located somewhere in Western Canada. 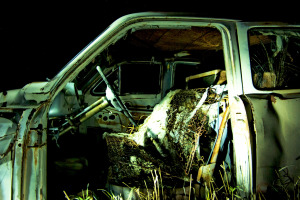 Using the trusty old Pentax K10D, an 18-55 kit lens, maglite, and a Coleman LED camping light for interior lighting, I managed to capture these distressed cars, combines and petroleum sheds using the maglite over a three hour period.

The technique which uses an approximate 12-20 second exposure involves running about blindly in the dark, waving the maglite at the subject from various angles, all in an effort to capture details without blowing them out or leaving them in the dark. Albeit far from award winning, the series does show potential behind the form.

That disproportionate painter fellow known as Picasso also experimented with light painting back in the 40s or 50s, however instead of using a maglite and coyotes he used a light bulb and no coyotes.

Click on the gallery image to see the larger image, or for a full-screen experience, click on that X looking thing in the top right hand corner.