Given an understandable apathy for most underpass projects, its hard to justify most editorial coverage. But this Mothra like design in a city sorely lacking in interesting, edgy public structures (getting better) deserved a look. Opened in October of 2011, Calgary’s Marshall Tittemore Architects and the city’s newly developed ‘Urban Design Team’ apparently used ancient creek beds and future designs in developing the project. 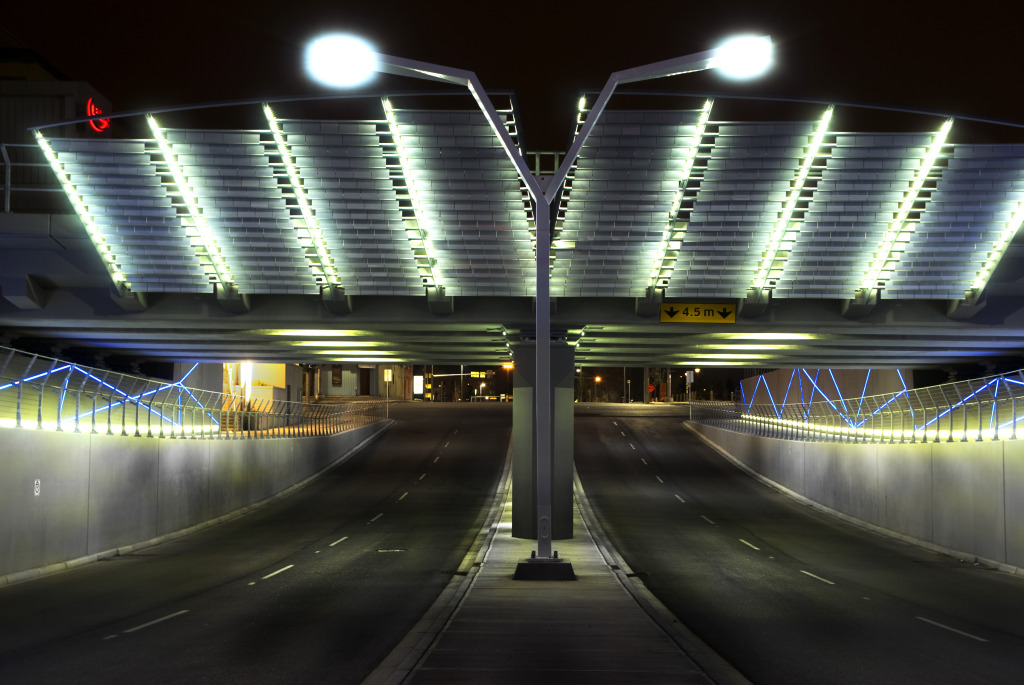 Long metallic blades, pivot and flow with the wind giving the structure an animated, dynamic vibe  (Photo: A. MacKenzie)

Located on the north side of Stampede Park, all decked out in silver lamais and 80’s laser tattoos, the new underpass is a bedazzled blend of Saturday Night Fever and Star Wars. Designed to enhance traffic flow between the upcoming revitalized East Village and Calgary’s cowtastic Stampede grounds, the $70 million project allows ease of access for the new village people and easier access to the upcoming Cantos Music Centre. So instead of dividing north from south, the new corridor now opens up migratory routes for urban dwellers to experience these future events.

The laser-lightshow, pedestrian friendly space employs wide walkways, dedicated bike-lanes and state-of-the-art LED lighting in its walls and handrails to make the space lighter and more inviting. A unique kinetic artwork installation in the project’s canopy consists of hundreds of aluminum fins set within a galvanized meal armatures & fastened by pivots. These shimmering metallic tiles allow individual fins to move with the wind or a passing train creating a fluid, reflective visual note to the space.