The wife says no. I’m definitely, absolutely not allowed to drive this car…with her in it. That car, unveiled at a world premiere event at Lamborghini’s HQ in Sant’Agata Bolognese, took the wraps off its new Huracán GT3 endurance racer.

To put the conversation in context, I/we had the opportunity to drive a wicked-awesome burnt-orange Huracan in Italy last year. And I freaking loved it! But this new lighter, faster, rear wheel drive version I feel is a tad beyond on my abilities at this time.

For those not in the know, the Blancpain Endurance Series revolves around five events with the goal of taking GT3 cars through endurance format racing with two mandatory pit stops over a three hour period. These races center around what will be the 66th running of the Spa-Francorchamps 24-hours endurance race in Belgium. In the past Lamborghini has run their own race series called the “Blancpain Super Trofeo Series” but now they get to play the reindeer games with race cars from European builders like Bentley, Aston Martin, BMW, etc. 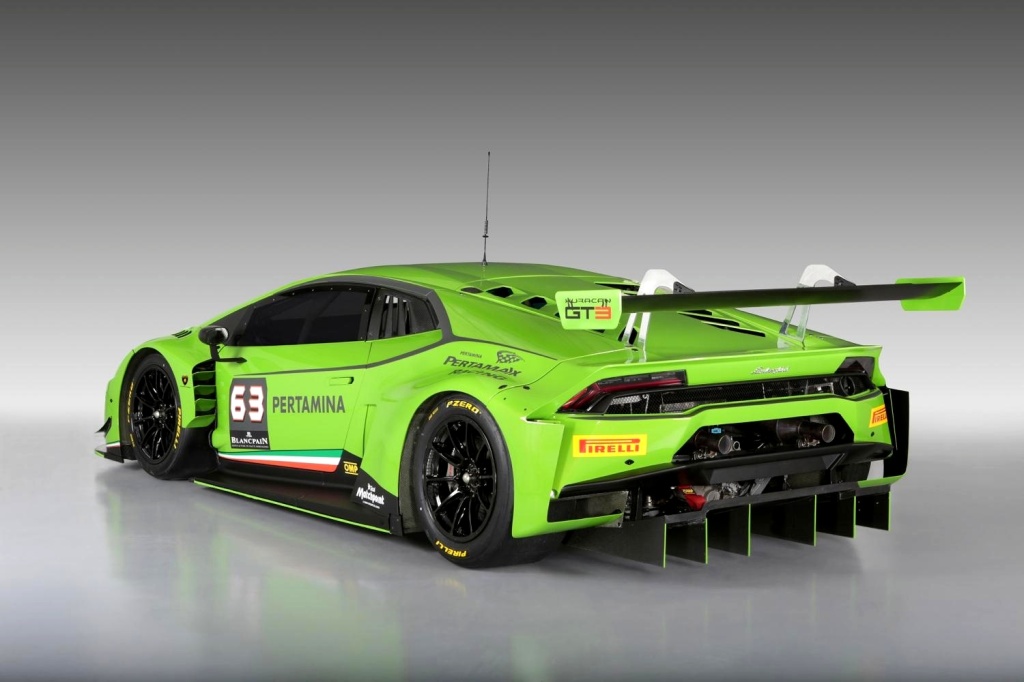 Unlike the stock Huracan with its AWD system, the new race version instead runs power through the rear wheels only. Purists rejoice. The 5.2 liter V10 stays put now it gets an integrated Bosch electronic control system to manage engine, gearbox, and traction control requirements. No news on final power figures.

According to the official press release, the new Huracán GT3 is now fitted out with an Alu-Carbon chassis (?) and a fully integrated FIA-compliant roll-cage. The team also had to modify the car’s subframe at the front to fit a new performance radiator and at the back to re-position the gearbox. Why move the gearbox, to improve aerodynamics my dear boy.

Race friendly tires are sized out at 315/680 for the steering and 325/705 out back for the tractionings. The brake system shows 380 x 34 mm steel discs up front and 355 x 32mm steel discs at the back. To adjust the car during a race, the driver can access and tweak 12 different settings from the steering wheel, including traction control.

Final weight for the GTS hasn’t been revealed yet (FIA BOP makes the call on this) but the press figures show its curb/kerb your enthusiasm weight to be 1,239 kg (2,731 lb). Weight distribution is pegged at 42% forward and 58% towards the rear section. As a comparison, a stock Huracan tips the scales at 1,422 kg (3,135 lb).

Other technical call out information regarding includes, “bodywork of composite materials that along with aerodynamics, has been developed in collaboration with Dallara Engineering with the direct involvement of the founder Gian Paolo Dallara. Aerodynamics have been tuned and airflow efficiency has been improved thanks to the rear adjustable wing, adjustable front diffuser and louvers.”

The new Huracán GT3 is also equipped with a carbon frame seat, and in case of emergencies, an OMP fire extinguishing system and a roof hatch that allows access to the driver if needed.

Lamborhgini and its stakeholders are currently testing and tweaking the new Huracán GT3 for its first race in April. The track of choice for the season opener will be Italy’s iconic Monza circuit. Grasser Racing Team will handle the drivers and racing with two new Huracán GT3s.

You can buy your own GT3 endurance racer from Lamborghini for a mere US$427,500 – not including taxes or race support team…or tires…or fuel…or insurance…or transportation costs…or a helmet.

Watch the GT3 slide about on Lamborghini’s cold, damp test track in this Tube-of-You documentary