Tired of leasing that sedate, pedantic, glossy Lexus? Why not come down to George Miller’s Anarchist Lease Hut & Ratrod Emporium and get yourself into a flamethrowing 1970’s era Holden HZ Ute for as low as $499/month. (Payment based on 84 months with $2000 down and a $35,000 buyout)

In what looks like every RatRod fanboy’s wetdream, comes the dystopian, apocalyptic vehicular offerings from George Miller’s Mad Max Fury Road. The last time we saw Max he was trapped in Tina Turner’s 80’s inspired mouse cage blowing whistles at large slow children. Although the vehicle inventory from ‘Thunderdome’ was okay it was missing the visceral f*cked up post-apocalyptic flavour of the original Mad Max films. Man is this gonna make up for that. (FULL GALLERY AFTER THE END)

Legendary graphic minded George Miller got back into the director’s chair for what is sure to make the Fast & Furious 7’s CGI works look like Lego movie fodder. Miller’s answer to CGI came in the form of real people, doing batshit crazy real world stunts, in even more insane machines in the Namibian desert. With the help of production designer Colin Gibson and his team of mechanically minded misfits, Miller asked for and got 150 insanely excessive transport devices for the film. We bring you the top 18 according to Mr. Miller and Co.

Using the website’s nomenclature, we find have been designated names like Prince Valiant, Big Foot, Fire Car #4, Plymouth Rock and the Doof Wagon. The latter, an 8-wheeled military vehicle, has been lovingly repurposed where it now shows 100 plus speakers of varying sizes mounted on what looks like massive twin HVAC towers. 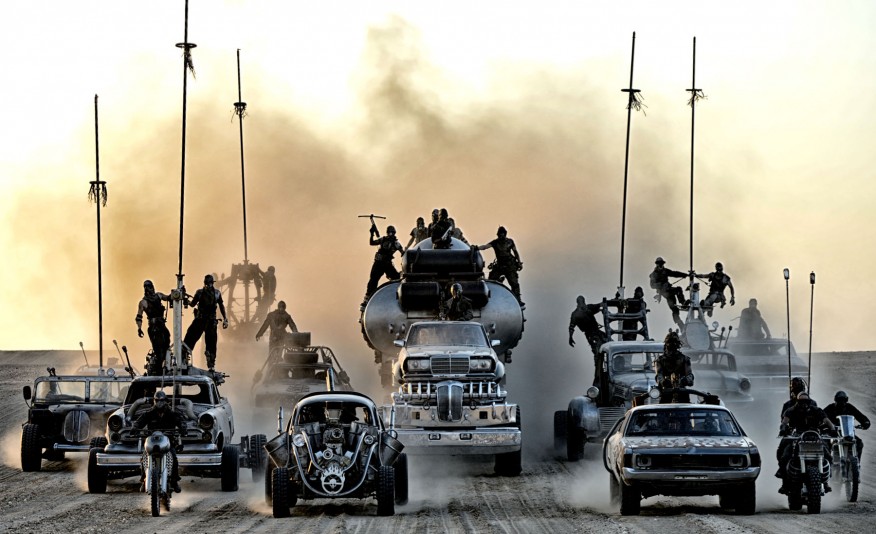 Max’s Interceptor is back but looking rough and tired compared to the likes of The Nux, FDK and Cranky Frank. Frank is according to the Miller-esque vehicle descriptions, “a radically chopped, Holden FJ Ratrod with a 4-intake supercharged V8 mounted on top of a tower of carbs that leaves the driver blind…Cranky Frank is the trusted if psychotic point man for Immortan’s personal retinue, convoy guard and Gigahorse guide.”

The piece duh resistance has to be, without a doubt, The Gigahorse. Why mount only one 1959 Cadillac DeVille to a twin V8 on a nightmarish chassis when you can piggyback two Caddys. This is the boss’s ride so comes with standard offerings like tractor sized dually rear wheels, bespoke gearbox, gently lifted suspension, and comes armed with a whaler’s harpoon gun and complimentary flamethrower. Consumer Reports gave The Gigahorse low points for ingress and egress, but high marks for visibility and satanic inspiration.

Not counting the disposable bikes and filler vehicles, Miller’s 18 custom vehicles shown here each deserve their own apocalyptic achievement award for innovation and creativity in the field of bonkers, crazy, does it go to eleven, RatRod engineering.

George Miller’s sequel is to Tina Turner’s Thunderdome as testosterone is to the Teletubbies. Mad Max’s gentle voyage down the Fury Road evokes a Jane Austen feel in the first acts with its subtle, yet complex character developments and quiet, relaxed musical interludes. But as the film meanders its way across the temperate desert at a leisurely pace in the 2000 hp War Rig the narrative arc starts to gain serious fucking altitude and speed.

The Academy should tomorrow award Miller and team an Oscar for most insane, stuntings in a post-apocalyptic role, and another for the director’s visionary idea of what the fuck California will look like in five years time. The chaotic massing of rusty, rudimentary cobbled together vehicles, not only steal each and every scene they define and dictate the tone and narrative arc of the movie. (I dropped in narrative arc for the pretentious fops who may wish for a more liberal dose of inane dialogue and filler chatter)

And whereas Fastly Furious 7 was an CGI infused exercise in mentally challenged dialogue, C grade acting, in your popcorn T&A and CGI tower jumping, Max and his tribe of kickass old and young female characters run us about on the grille of a 1932 Ford 5-window like a bunch of literal Swedish Berry eating deer on the proverbial fucking headlights.

The skill and talent of the stunt coordinators, persons and drivers really is to be appreciated on another level for the amount of choreography and timing required to execute some of the most insane, bonkers, demolition scenes ever filmed.

This screen destroying project by Miller & Co will be the reason 4-point seat belts and oxygen become standard fare in all theatres from this day foreward. What a lovely dystopian day indeed and best of luck with that 2-hour clench.

A detailed gallery of the TOP machines can be found below. 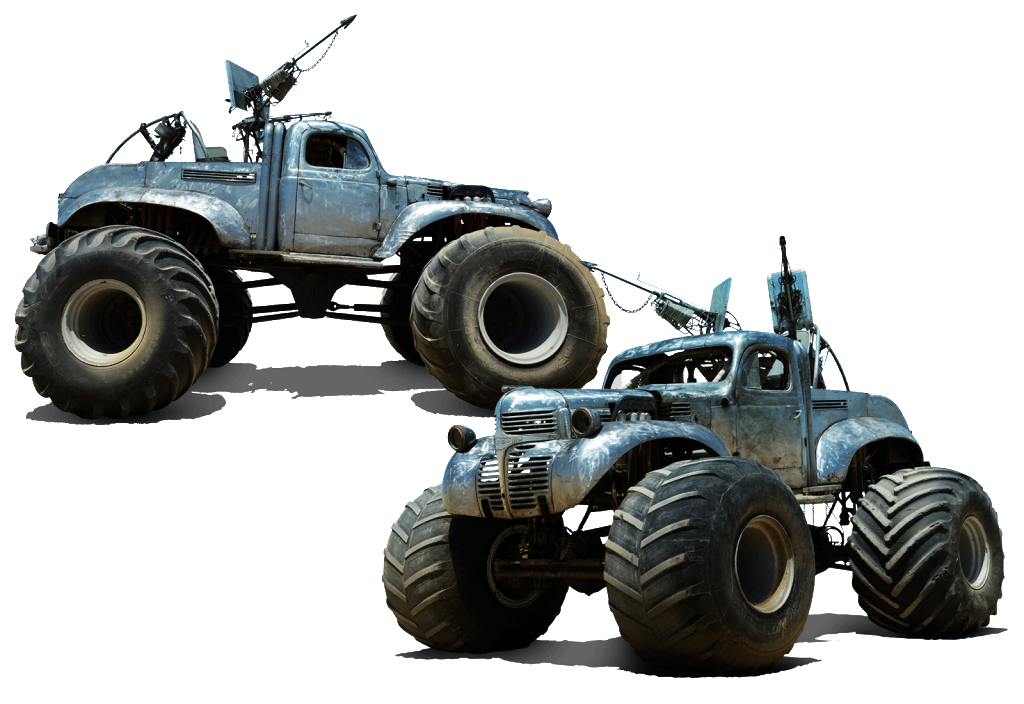 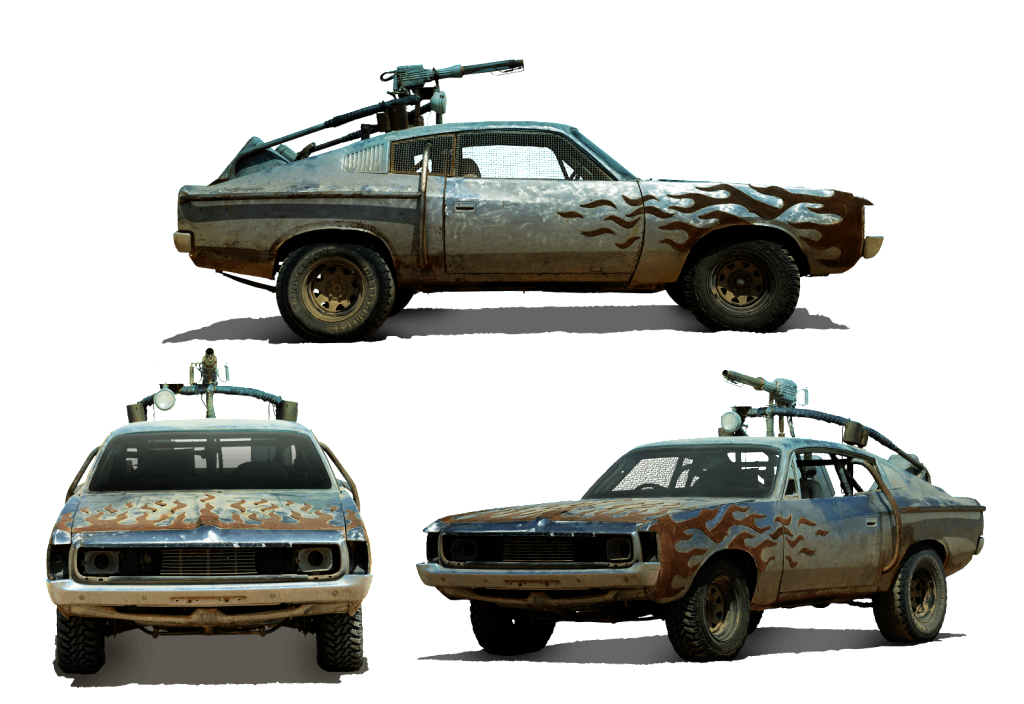 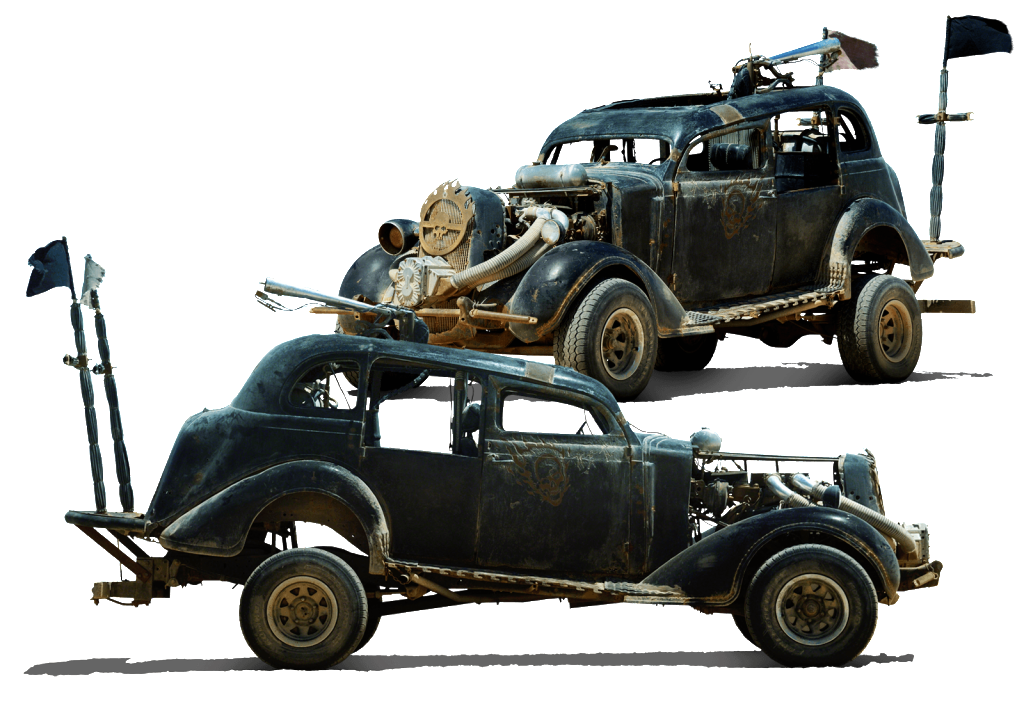 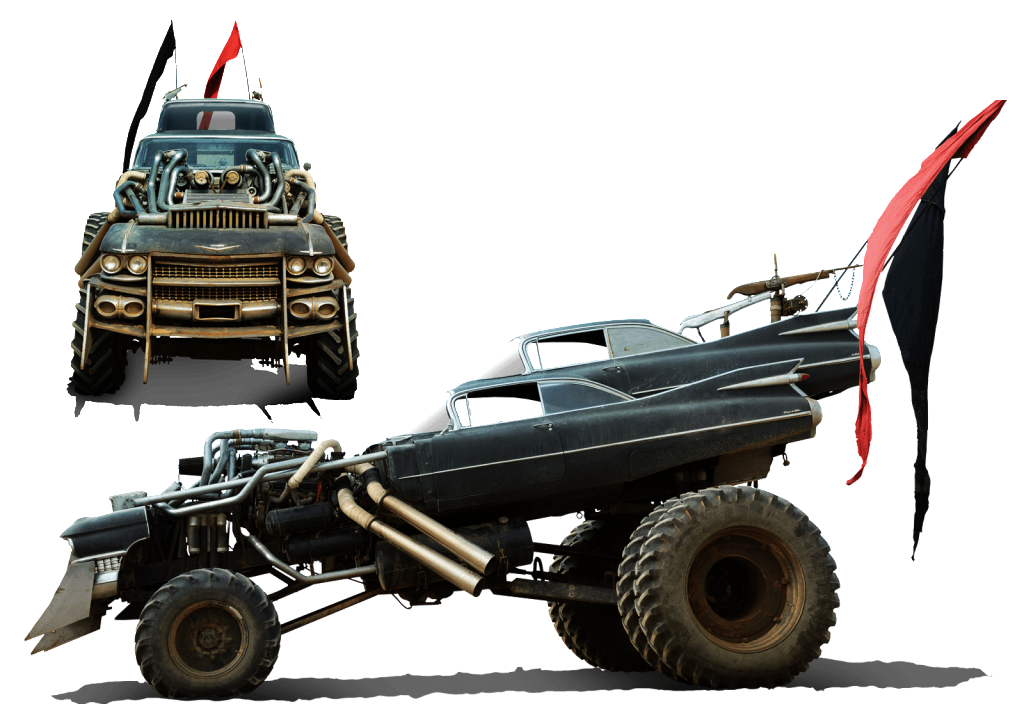 The bosses car, Gigahorse features two ’59 Cadillac Coupe DeVilles, welded on top of each other, on a lightly raised chassis & duallys out back! 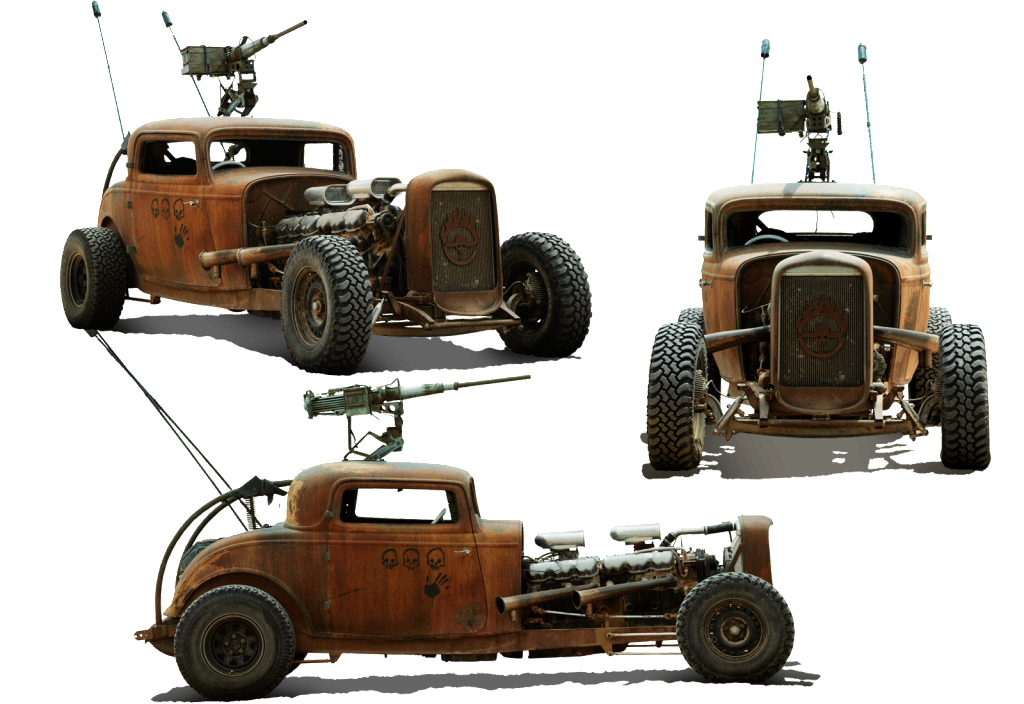 Buggy #9 runs a C3 Corvette body mated to a Holden one-tonne truck chassis, and looks nothing like a buggy 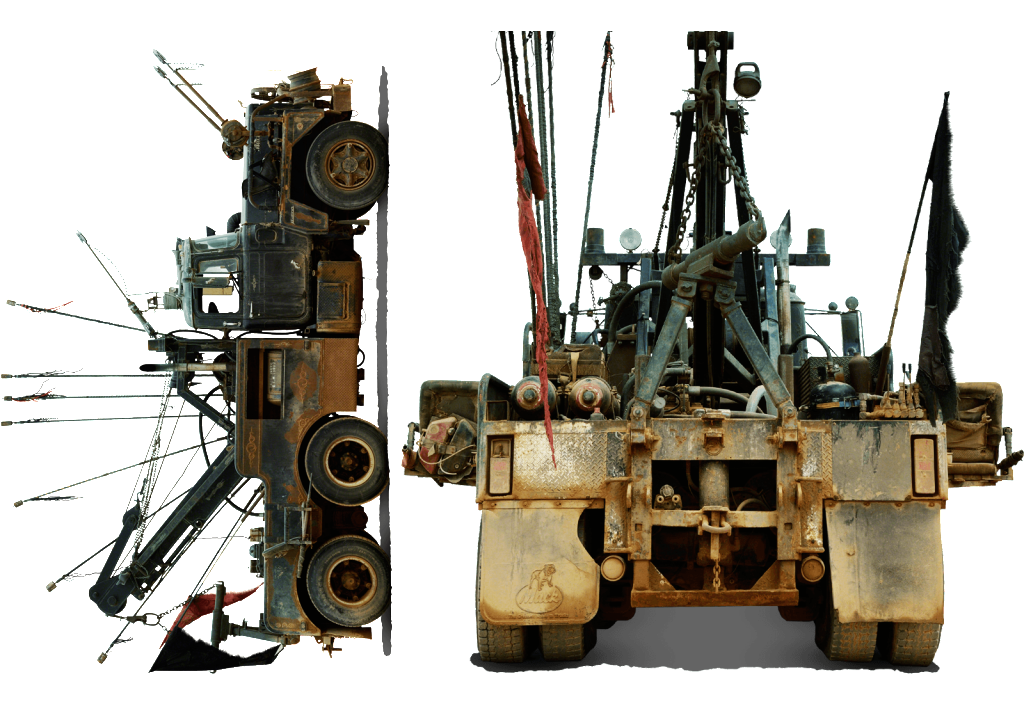 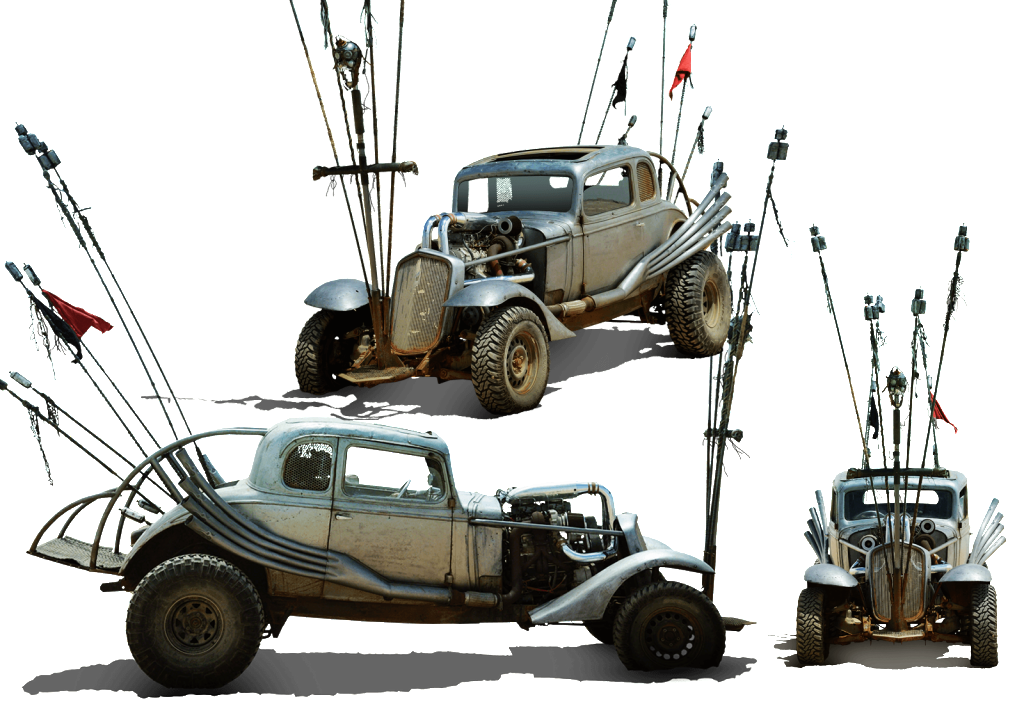 Looking like an anarchistic Olympic flag bearer, this 1932 Ford 5-window is driven by Nux( hence the Nux Car) Comes with Max tied to the front as standard.

Not your grandpa’s Buick! BUICK runs massive duallys out the backside & a turret mounted anti-aircraft gun 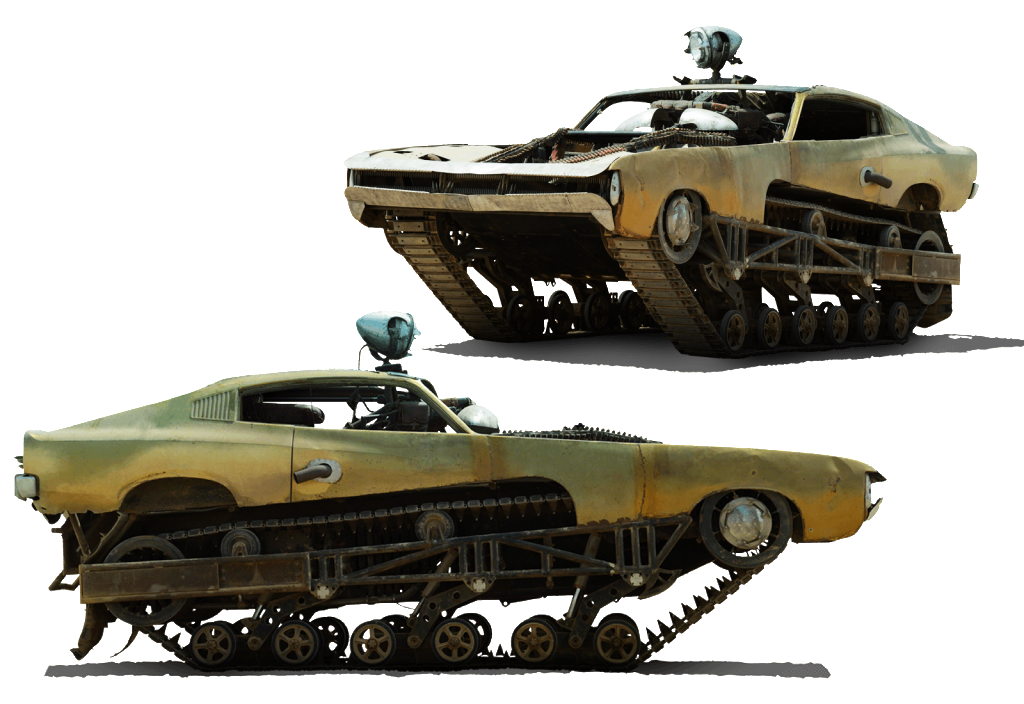 A subtle blending of a go-fast tank chassis, mid-70’s Valiant & an excessive inventory of bulletsh defines the go-anywhere Peacemaker 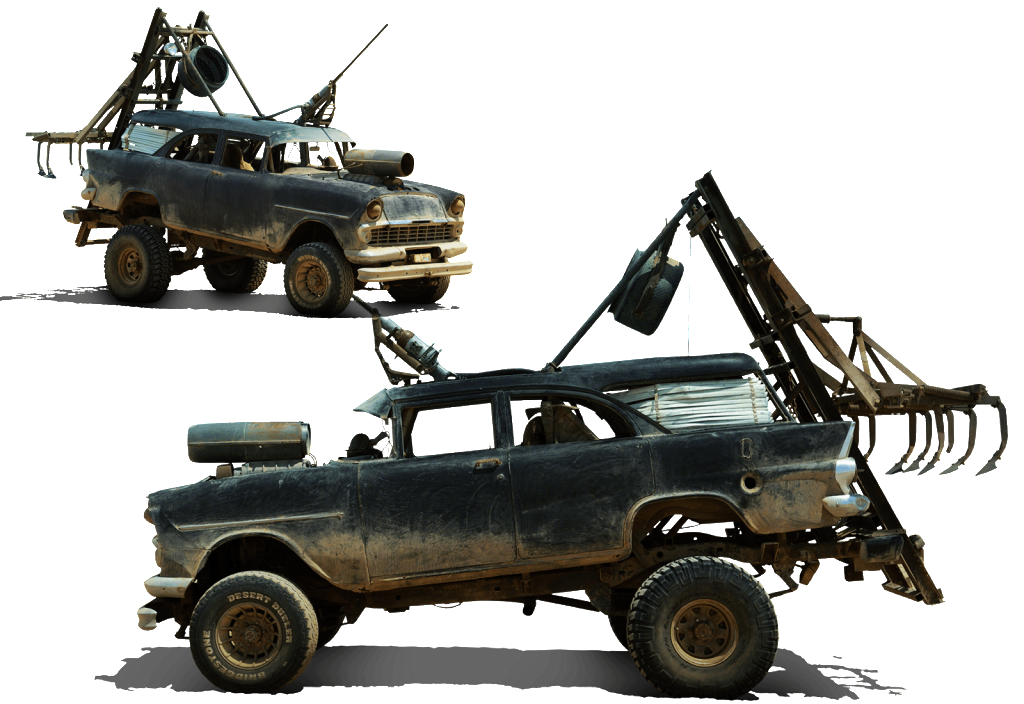 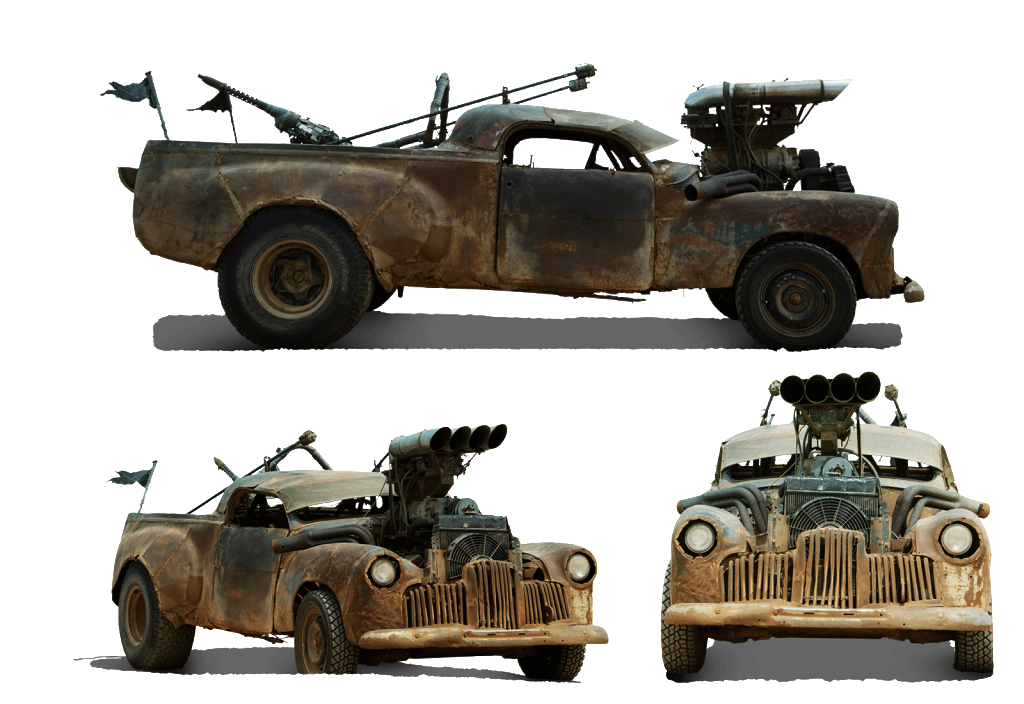 Running a blown V8 upfront & flamethrower out back, the FDK resembles little of its former VW Bug self 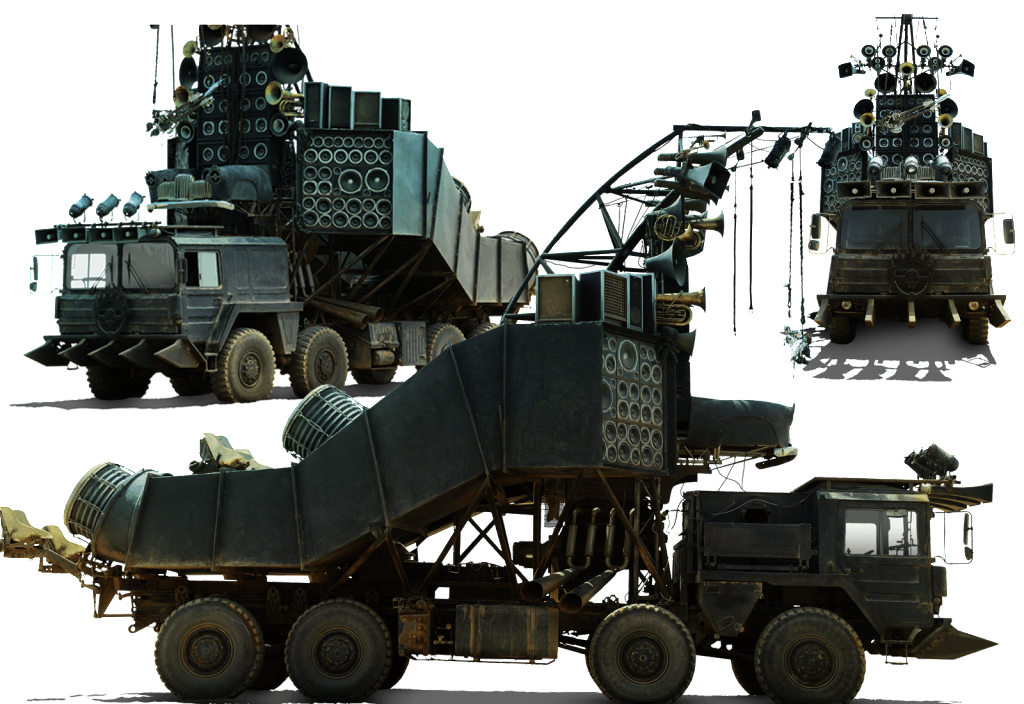 The world’s largest boombox, the Doof Wagon is an altered 8-wheeled military machine, repurposed with over a 100+ speakers mounted on massive boombastic HVAC towers 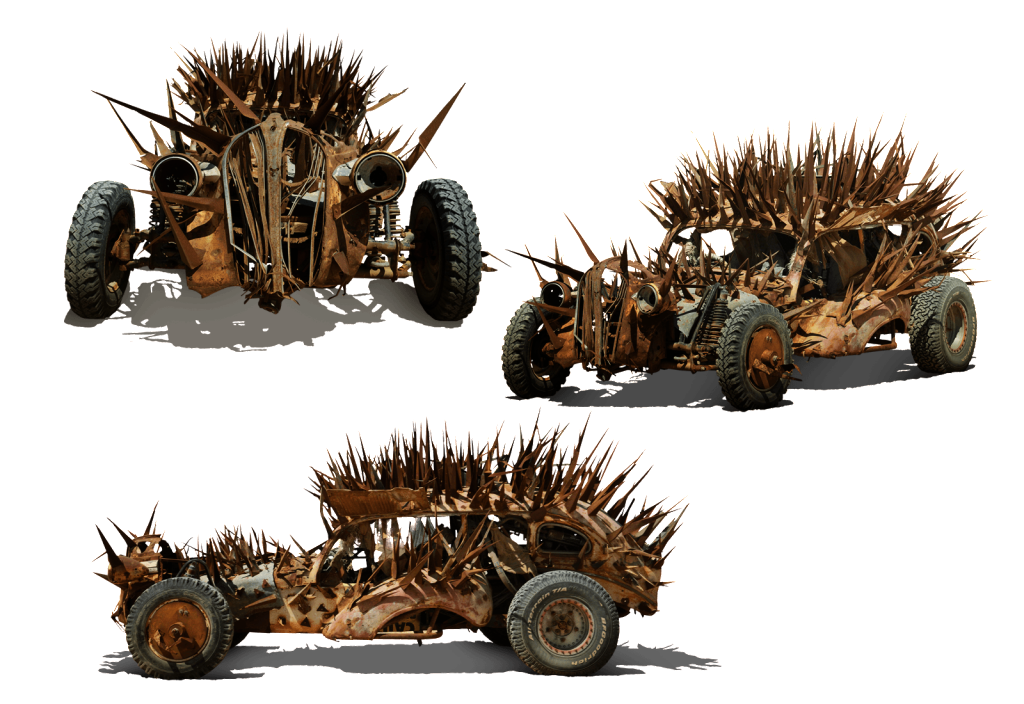 Plymouth Rock, a Ratrodder’s S&M wetdream, is what you get when you mate an oversized rusty porcupine with a deconstructed ’37 Plymouth 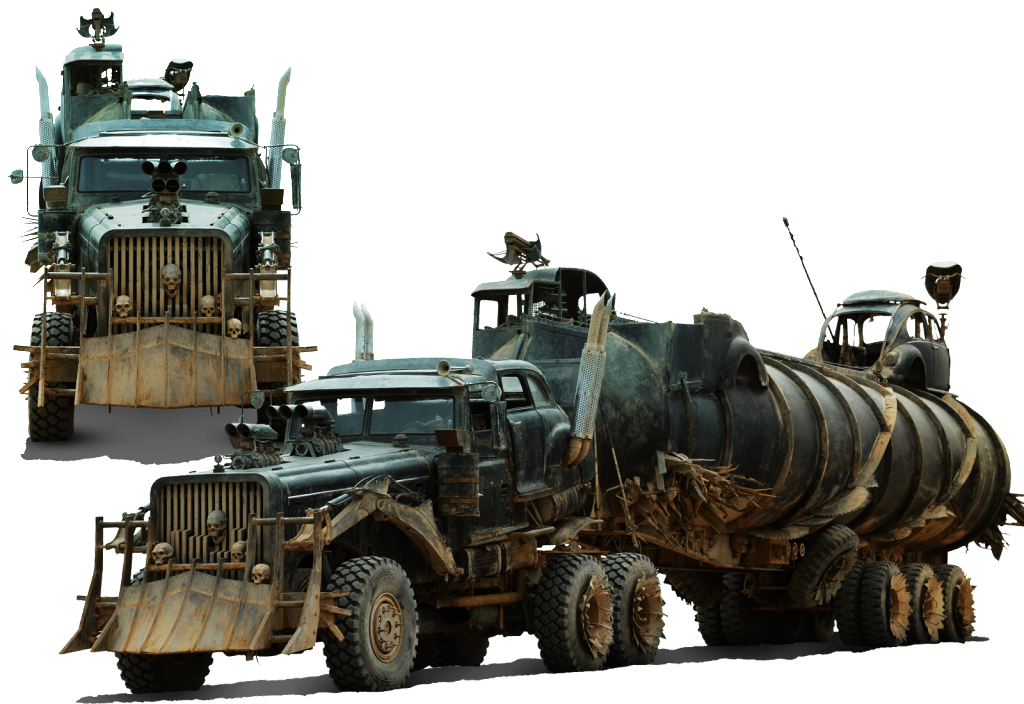 6-wheel-drive Tatra semi mounted on spikey wheels, half a ’40s Chevy welded out back & gunners turret make the War Rig a joy to behold 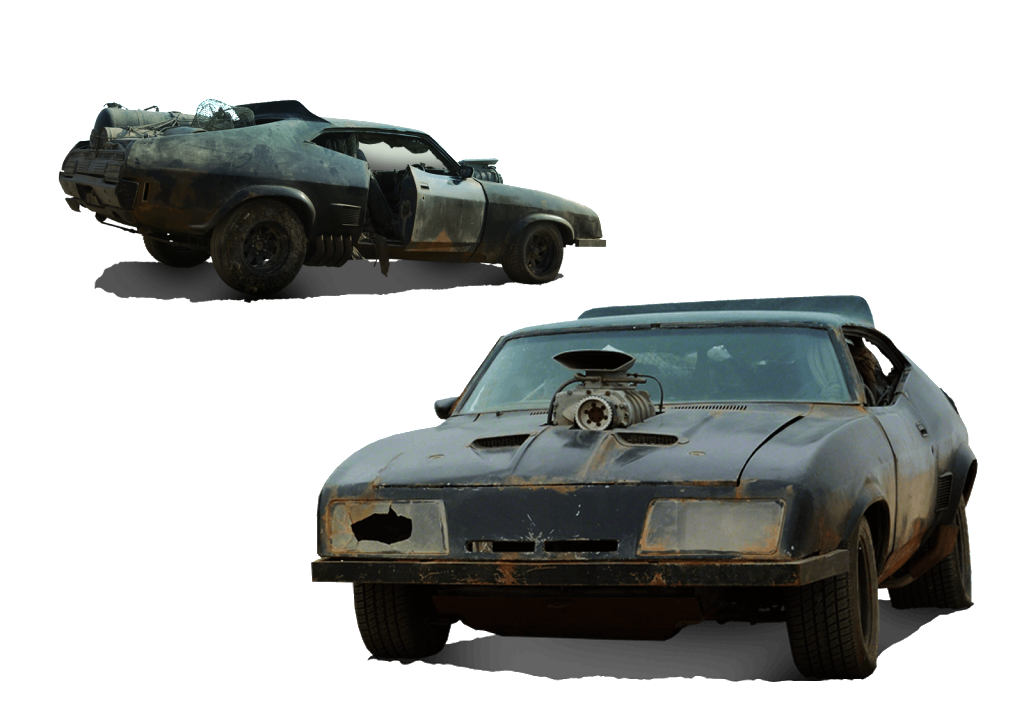 Max’s original Interceptor, an XB Falcon Coupe is back but looking rough and tired after 30 years in the desert 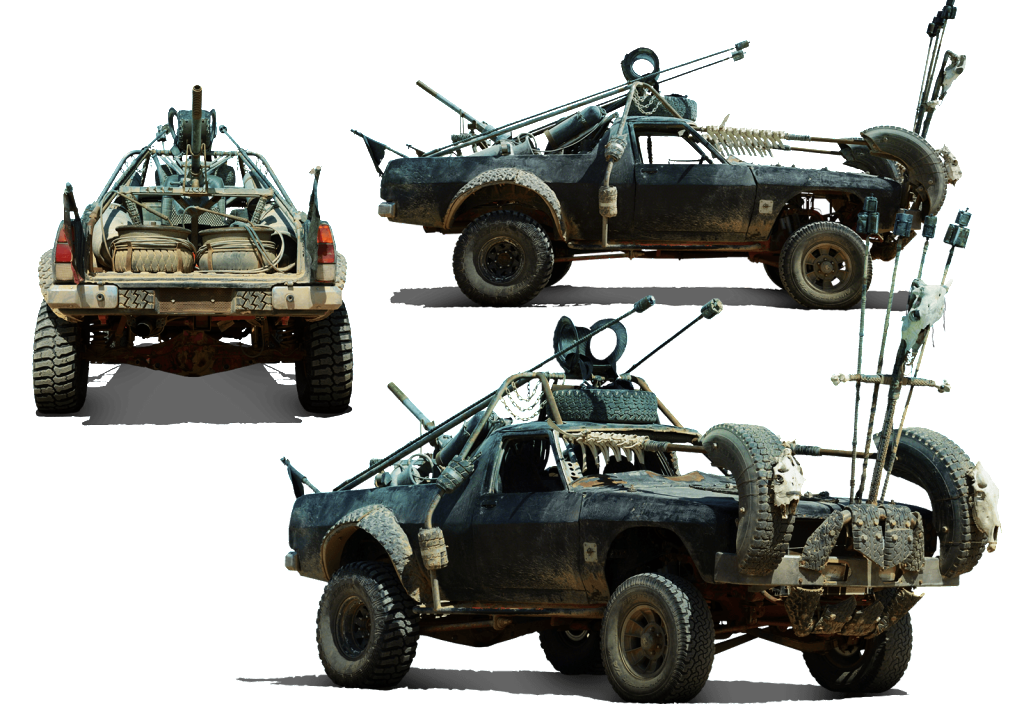 THE AGE OF SPORT: Kia’s 260 hp AWD Sportage shows the Koreans are really not f*cking around
Tesla’s PowerWall & PowerPack are set to change the energy game!