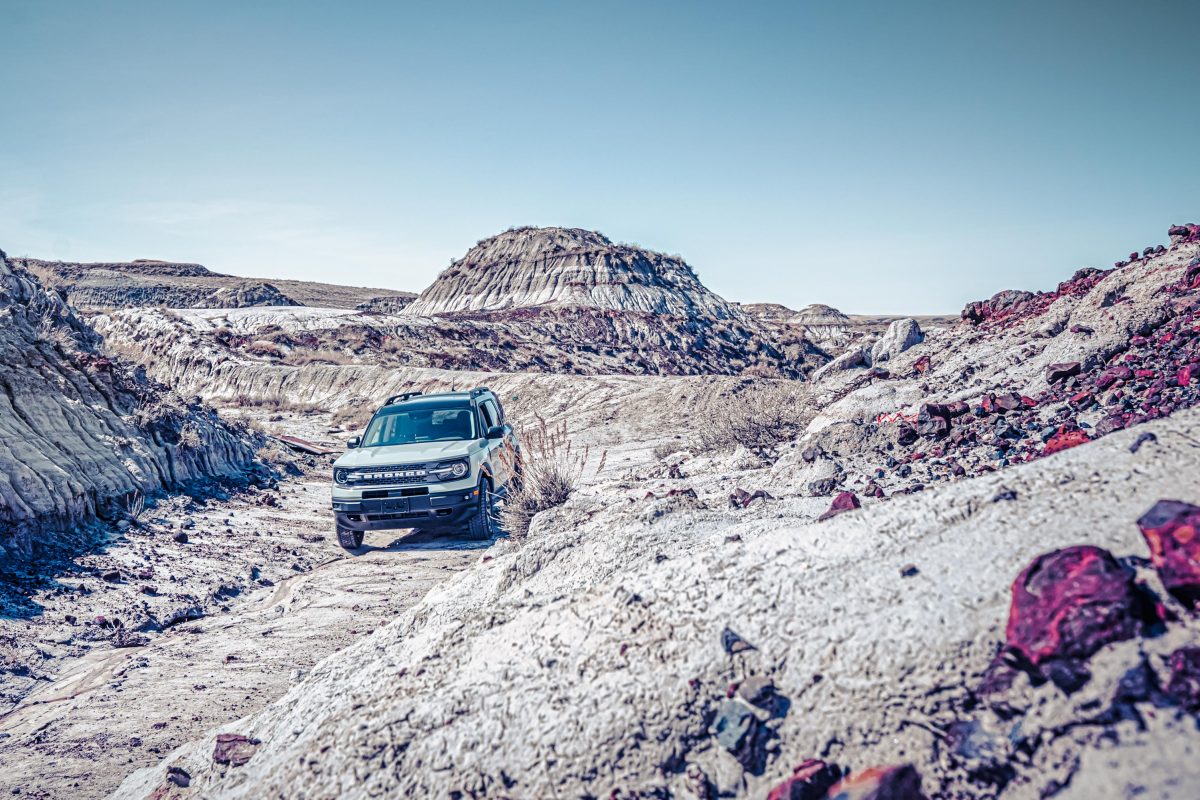 In the infamous “King of the Hammers” drivers of specialized 800 hp off-road devices are pitted against a 165-mile mixed bag of high-speed sections and 100-1 ratioed rock crawling sections in California’s Johnson Valley. Unlike its Mexican counterpart, the Baja 1000, racers in the field are required to tackle not only 100 mph desert bits but also highly technical rock crawling sections.

Now the question remains, could Ford’s highly anticipated new Bronco run this grueling mixed bag of offroadness? In Baby Bronco form, likely not. We’ll have to wait a few months to drive the actual full-sized Bronco before making that executive Hammer King decision. In the meantime, our 2.0L turbo Sport, Badlands Edition Bronco will suffice nicely.

Born on the plains of Detroit back in 1965, Ford’s iconic Bronco ran through a couple of iterations before ending production in 1996. Much like the restyled Mustang, the marque’s original SUV has been enjoying much hyperbolic press of recent thanks to a completely redesigned model for 2021. Born to directly compete with select Jeepsters, the new Bronco has so far lived up to the hype thanks to various media outings and reviews.

Smaller on the ground than its Escape sibling, the Bronco Sport Badlands edition, features a unique AWD system with the ability to shuffle torque left & right to the rear wheels. Our run to Drumheller’s actual Badlands found the 8.7 inches (22 cm) of ground clearance (an 0.8-inch increase over a standard Bronco Sport) to be adequate in summiting select hills and dried out creek beds.

Thanks to a built in front facing camera, we were able to watch for jutting jurassic boulders and pick our path carefully in real time. Our blue-grey Badland ride also afforded us better approach / departure angles. Approach and deaprture angles are critical in offroading as they determine the angle between the bumper (front or back) and the initial contact point of the wheels. Essentially these angles govern the types of obstacles one can drive over without hitting the bumper when ascending or descending. I had no trouble with bumper bashing behaviours on our offroad sortie but I also wasn’t running Hell’s Gate in Moab.

We also never had to fjord rivers or swollen prairie creeks, even though our tester had better water-fording capability than the stock version. And unlike big Bronco with a live rear axle, the Bronco Sport runs an independent arrangement. Under the hood our tester ran a sporty, capable 2.0L turbo-4 banger.

Hooked up to an 8-speed automatic and fairly serious AWD system, the plucky inline four was good for 245 hp and 270 ft. lb of torques. MotorTrend has the thing running 0-96 kph (60 mph) in a respectable 6.5 seconds. Highway runs find the tiny motor running low revs even at 140 kph and similar. The engine does have to work it to get the passing done but overall the 2.0L performs like a wee multi-purpose champ in all our tester scenarios.

Space inside was quite adequate for a small offroad ute. Front and back leg room all good. Cargo space up to the it for inner city tasks and dailies to the prairies. Road and wind noise also surprisingly quiet for what is essentially a box with a smaller box on top.

Stylistically speaking, the wee Sport got huge attention most anywhere we went. Big truck dudes, inner city mommas with appropriate dogs, middle aged white dudes in Loews, all curious about the baby B. Ford did right with the Bronco Sport where Land Rover missed on the Defender with a tight cohesive package that nicely fit the ute’s mandate without trying too hard by half. And the Cactus Grey paint scheme also received significant kudos not only from the adoring masses but also from the Canon 5D Mk IV and Samsung Galaxy S10.

Starting at just over $40,000 (our tester $47,450 CAD) put the Badlands Edition Bronco Sport at a slightly higher price point than its competitors. However, given the new ute’s impressive offroad abilities, highway manners, tech options, styling, power mix and overall demeanour, more than justifies the few extra pesos. Especially when compared to the likes of the directly competing junktastic Jeep product.