A few weeks back McLaren unveiled the first in its new Sport Series lineup, the 570S. Sporting a detuned twin-turbo 3.8 liter V8 and priced under $200k, the 570S sports new styling and built to compete directly with Porsche’s 911 series. But now the company has unveiled the second in its Sport Series lineup, the 540C Coupe. With a smaller engine but the same great design application as the former, this new McLaren is the UK firm’s most attainable yet.

From the Press Release:
“McLaren will launch its second model in the new Sports Series, the McLaren 540C Coupé, at the Shanghai Motor Show, 20-29 April 2015. The most attainable McLaren yet, the 540C Coupé joins the recently revealed 570S Coupé in the Sports Series as the brand brings its race derived DNA to a new audience and segment. These introductions bring the number of new McLarens launched in 2015 to four as the brand continues its rapid growth. Globally available and priced from £126,000, the 540C Coupé can be pre-ordered now with deliveries scheduled to being in early 2016. 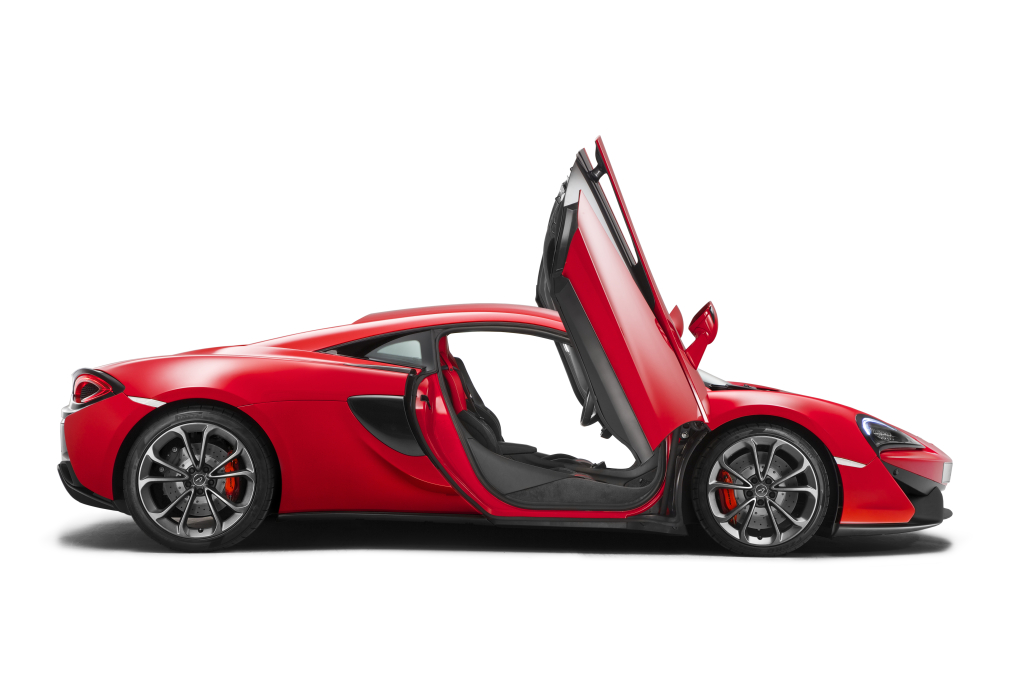 The 540C Coupé is a pure McLaren, and a pure sports car, sharing its DNA with the models in the Super Series and Ultimate Series, including a light weight carbon fibre chassis and race-derived technologies. It is fitted with a mid-mounted 3.8-litre twin turbocharged V8 engine which has been developed to be responsive and thrilling, even at low engine speeds. As its name suggests, the Sports Series dedicated application of the award-winning McLaren power unit generates 540PS at 7,500 rpm and 540Nm of torque at 3,500-6,500 rpm. With stop-start technology, it offers optimised levels of efficiency and a longer range suited to the typical usage of cars in this segment.

At the heart of the 540C, as with the 570S, is the unique carbon fibre MonoCell II chassis which has been newly designed with a greater focus on day-to-day usability, offering improved ingress to and egress from the cabin, along with class-leading occupant protection and safety. A dry weight of as low as 1,311 kg (2,890lbs) is achieved as a result of this lightweight structure and the use of aluminium body panels. This figure sees the 540C almost 150kg lighter than its closest competitor. 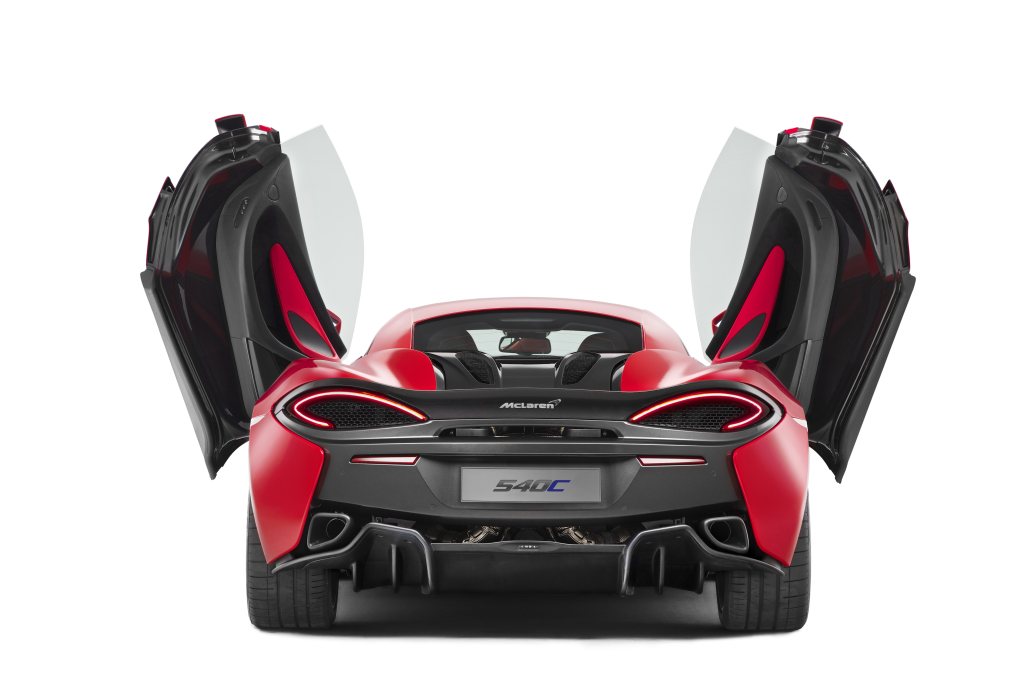 A subtly revised aerodynamic package and a dedicated wheel design mark out the 540C Coupé against the more powerful 570S Coupé. Unique aero blades below the front bumper channel cold, clean air through the lower bodywork and up over the sculpted bonnet, flanked by large LED headlamps. At the rear, the diffuser sits between the twin exhausts which exit below the rear bumper. The aerodynamically-led styling of the Sports Series Coupé includes intricately designed dihedral doors which include the elegant floating door tendon. This design feature channels air along the length of the door into the two integrated air intakes mounted in the rear quarter panel. This creates a clean path for the air to flow along the bodywork with minimal drag, directing air to the flying buttresses at the rear of the cabin which optimise air flow over the rear deck to increase downforce levels and aid engine cooling. An integrated spoiler at the trailing edge of the rear deck provides optimal downforce. 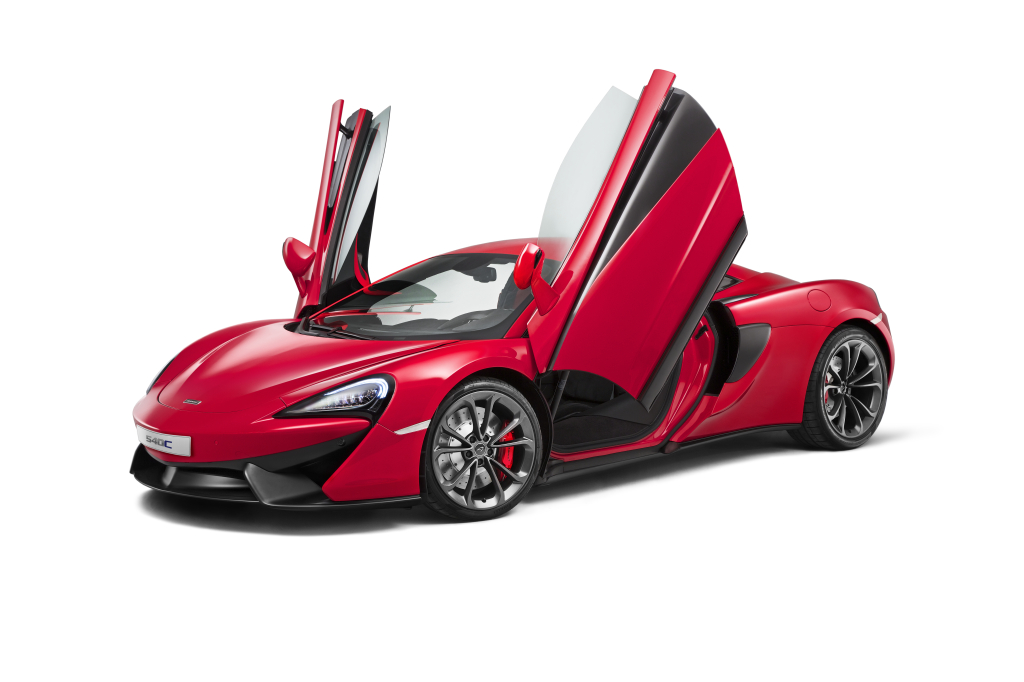 The 540C Coupé is fitted with distinctive new cast alloy wheels, available with silver or stealth finish, 19-inch at the front and 20-inch at the rear. These are fitted with Pirelli P Zero™ tyres as standard, which have been developed specifically for the Sports Series to offer high levels of performance in all conditions, with progressive levels of grip and a focus on comfort. The 540C retains the Formula 1™-derived Brake Steer system, designed to aid cornering through the application of braking force to the inside rear wheel. This enables later braking into corners, and earlier application of power on exit.

The 540C features a newly-developed suspension system ensuring enhanced levels of driver engagement and refinement on both road and track. The system uses front and rear anti-rollbars Formula 1™- style dual wishbones and independent adaptive dampers. The damper tuning has been revised on 540C, over 570S, with more focus on day-to-day road driving. Adaptive dampers offer control over bump and rebound settings using the familiar McLaren ‘Normal’, ‘Sport’ and ‘Track’ handling settings, with the Sports Series having its own unique damper settings. In ‘Normal’ mode, the system provides a refined yet engaging ride, while the ‘Sport’ and ‘Track’ settings allow a greater level of focus and engagement when required. Twin damper valves ensure precise control, while dual wishbone suspension provides optimised levels of ride quality and driver feedback. 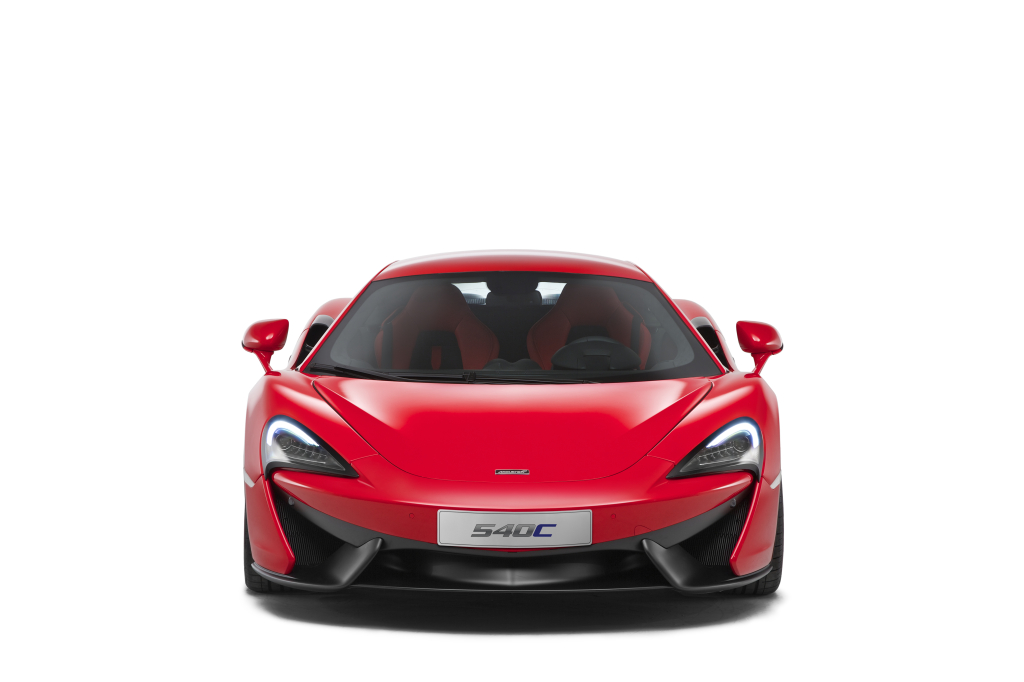 The interior of the Sports Series has been created with a focus on space and ergonomics, offering great outward visibility and interior space for occupants and their belongings. Organic curves carried inside from the exterior design bring delicate tension without aggression to ensure the cabin remains a welcoming environment.

Inside the cabin, the 540C Coupé is luxuriously appointed with leather upholstery to the seats, dashboard and lower doors as standard. The ‘floating’ centre console features a seven-inch IRIS touchscreen which controls all elements of the infotainment system. The air conditioning controls are also incorporated, as first seen on the McLaren P1™, minimising switchgear in the cabin. The touchscreen also controls the standard DAB digital radio, as well as satellite navigation, Bluetooth telephony and media streaming, voice activation and the audio media player. The IRIS system also includes the electronic owner’s manual.

The McLaren 540C Coupé is the second model to join the Sports Series, and sits alongside the 570S Coupé. Both models are available to order from the dedicated global McLaren retail network, operating in every major automotive market, in more than 30 countries.”

RIPSAW
THE AGE OF SPORT: Kia’s 260 hp AWD Sportage shows the Koreans are really not f*cking around