Okay okay, so I’m not exactly in Switzerland. I may actually in fact be sitting at my Gus-designed oak dining table, in my flannel jam jams, w Eddy Bauer flannel top, sipping on a wee Dram. But theoretically, were in Geneva for the 2015 Auto Show I can assure you I’d streaming live images of me eating cheese fondue without hesitation.

But today was Day 1 of the big Swiss show and some of the big players wasted no time in showing their junk. Lamborghini, Bentley and Infiniti all debuted or showed models live for the first time. Let’s start small and work our way up to the new 750 hp Aventador SV that J.K. Simmons would have driven to audition for his Oscar winning role in Whiplash…followed by a short live action film from Schmee documenting the debut of Koenigsegg’s Agera RS. 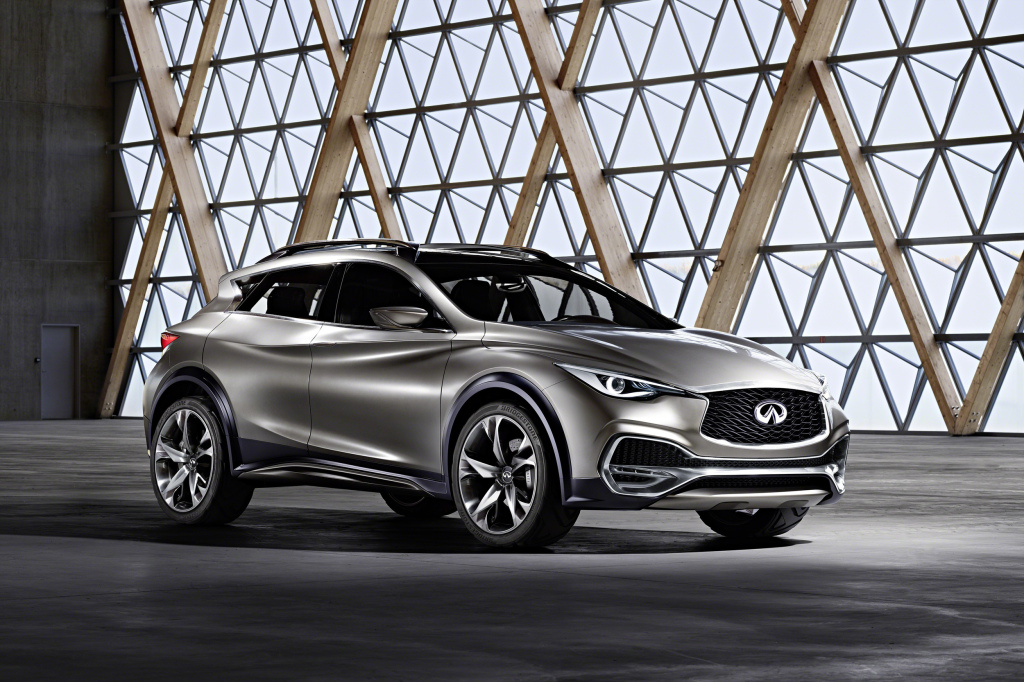 Infiniti’s QX30 Concept CUV made its world premiere in Geneva

Slated for production release and launch next year, the QX30 Concept has been seen before but today was its official debut in Geneva. Although a version of the QX30 will make it to production, Infiniti notes that it will be a toned down version of the concept shown. Of course.

According to Roland Krueger, Infiniti President/CEO, “The QX30 Concept foreshadows an entry in the premium compact segment that provides a stylish alternative to the existing offer in this segment,” claims Krueger. “The vehicle embodies our conviction to give customers the freedom to go wherever they want, whenever they want – in a style that turns heads and makes a statement, in a way that expresses their individualized character.”

No word on pricing but Infiniti has tagged the concept as a ‘premium compact crossover’ so I’d be looking to spend in the range of $40,000-$50,000 CDN when it comes on stream next year.

Those sneaky chamomile drinking mother fu#ckers from Camden-on-Teal, done pulled a fast one on the internet medias. Bentley pulled a Ford and managed to sneak something called an ‘EXP 10 SPEED 6’ into the Geneva show.

The concept device retains signature Bentley exterior treatments but it’s also way sassier, lower and more aggressive than anything currently offered by the kids from Pyms Lane, Crewe, Cheshire, England. So, here’s what we know. The concept is a 2 seater and not a 2+2 like the other coupes. Under the hood likely resides the same powerplant, gearbox combination as in the existing Speed 6…with modifications perhaps.

But it’s the cars design elements that are where the real conversation is at. A lower, more aggressive grille with LED enshrouded headlights and laser like marker lights starts off the show. A funkier scalloped hood comes along next as do big, chiseled air ducts behind the front wheels. The taillight treatment is unique to the car, as are the door handles, grille mesh and exhaust tips which are extruded from 3D printed metal bits.

Inside the EXP it’s all sumptuous leathers, anodized metals, burnished woods and a curved infotainment display. Bentley won’t say if the car will become a reality so for now we’ll just have to enjoy it as a bespoke 1920×1140 wallpaper.

Did the Aventador need another 50 hp? Likely not. Will your neck cry out in terror should you get to pilot the new 750 LP-750 4? Most definitely. Making its world debut at Geneva today, the fastest production Lamborghini ever was introduced by Lambo CEO, Stephan Winkelmann. The SV badging (Italian for superveloce) translates roughly into super velocity, which in this case is perfectly acceptable as the car is not only faster but lighter and more extreme thanks to a cleaned out interior and more carbon fiber. 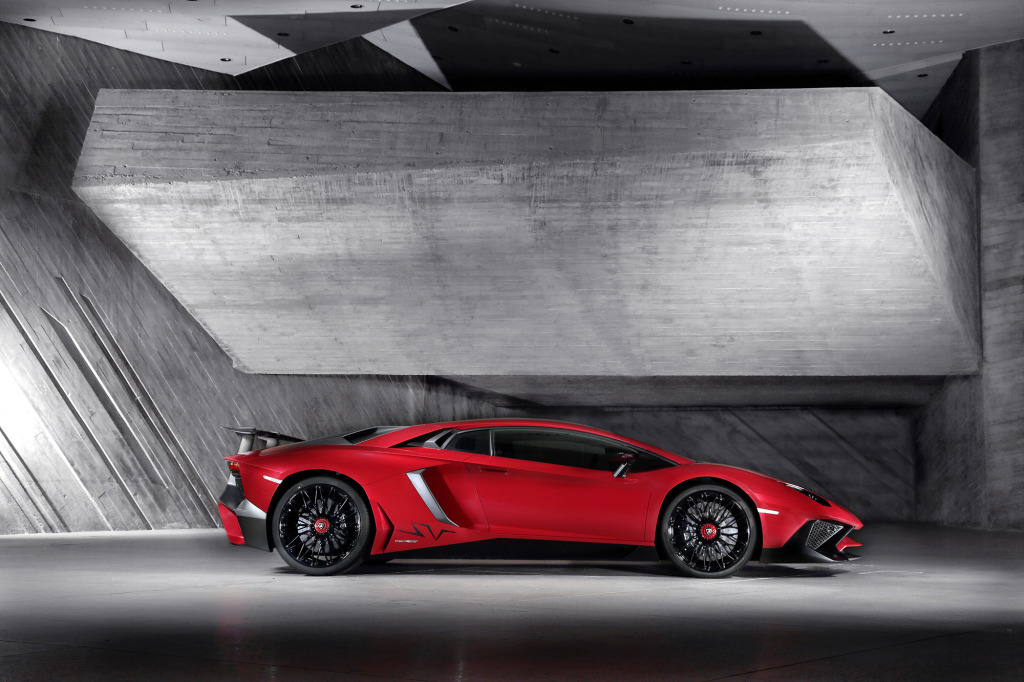 To make the theme car from Whiplash even lashier, Lamborghini took the 6.5 liter V12 (previously 690 hp), added a cleaner flowing exhaust system, tweaked the valve timing and dropped 110 lb. All that math adds up to a power-to-weight ratio of 4.48 lb/hp…or in simpler terms 750 hp and 690 lb.ft of cranial configuring torque.

That math then equates out to 0-100 km/h (62 mph) time of 2.8 seconds and a top speed of 217 mph. Mid range power is going to off the chain stoopid! When I say wear a neck brace I mean wear a neck brace. The car retains the same gearbox and Haldex AWD system that oversees power to the big honking 21″ 355 rear rubbers out back and to the 20″ 255 tires up front.

On the outside, the 750 SV looks different because it is. More aggressive aerodynamic bits have been bonked onto the car, including a new carbony fibered Boeing 737-sized rear wing. The new adjustable spoiler is reported to give the new Aventador an additional 70 percent more downforce than its so much slower sibling.

The new LP 750-4 will set your kid’s college fund back roughly US$370k when it comes on market this summer.
IMAGES AND THOUGHTS ON MY AVENTADOR LP 700-4 DRIVE CAN BE FOUND HERE 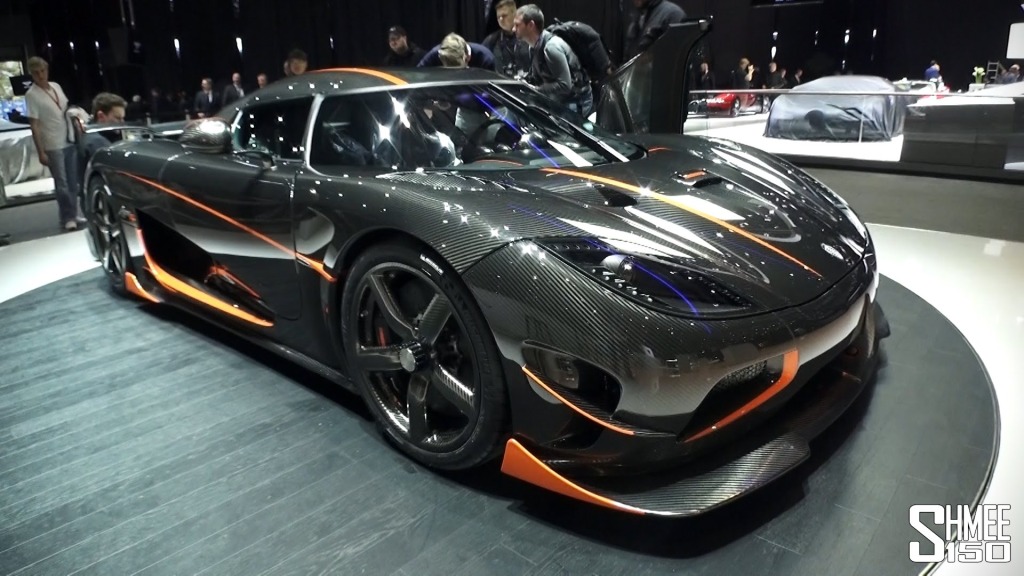 Oh, and there was this new hp sport ute from some kids in Norway or something. Unfortunately their website isn’t quite up to playing nice so we’ll have to wait for further details on the new Agera RS. We can however note that since the ‘R’ Agera develops 1,140 hp and is capable of a top speed of 440 km/h (273 mph), chances are good the RS will be even more insane. And there’s still another even more insane Swedish Chef ride called the ‘Regera’ on the way.