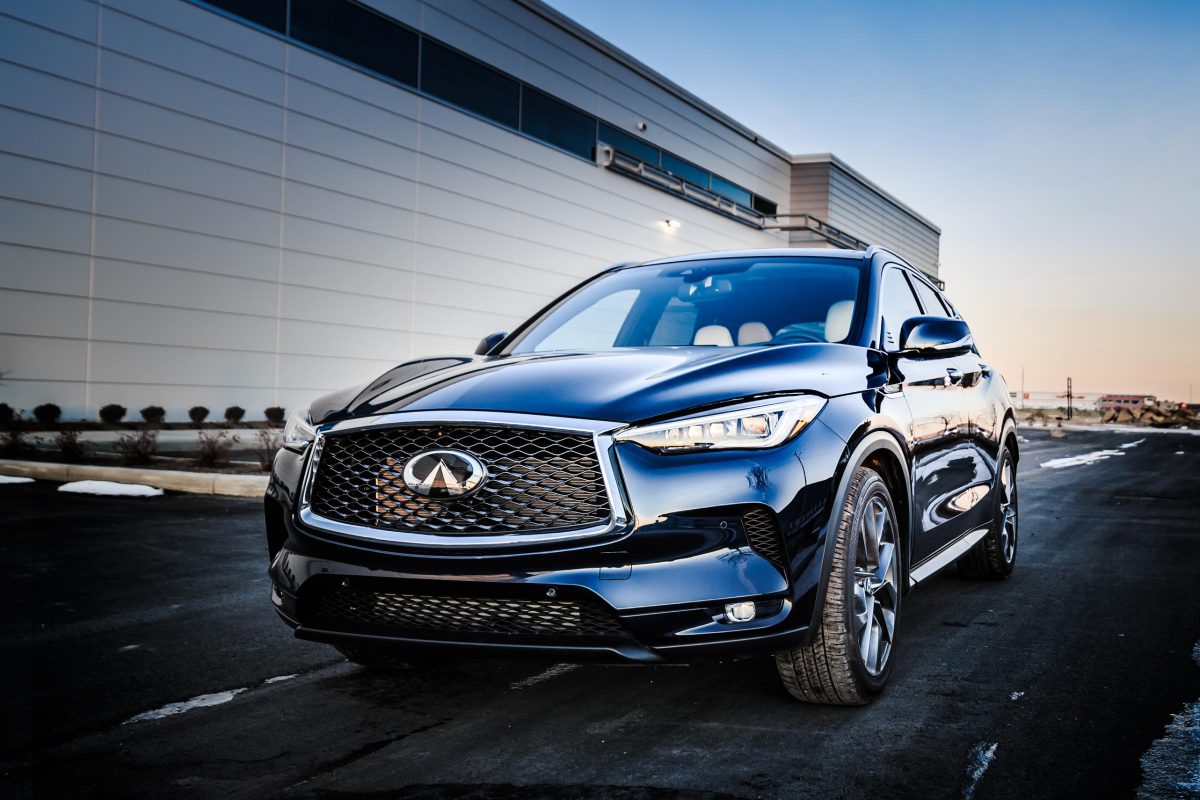 The Device.
Twice I had the opportunity to drive Infiniti’s turbocharged QX50 crossover device. The first time saw throttle drop-out issues as result of a computer malfunction and poor gasoline choices. Apparently the variable turbo/4 banger combo prefers hi-test. I’d initially thought it was a communication malfeasance betwixt the throttle controller and the gearbox. Power would literally drop out for 1-2 seconds with no fantastic explanation.

A month and a half later the wee buzzy beasty came back up on the drive list. Figured best to give it a second chance as Infiniti wouldn’t  purposely send me out in a ride with character/throttle flaws. Sure enough, the 268 hp AWD QX50 proved to live up to the fun, stylish hype. But as a dad to a highly motivated 2 year old, and all round general old person, I’m going to allow the good folks at Car & Driver to best explain the QX50’s world-first variable compression engine. (this is what we in the business call a “cop-out”)

WORLD FIRST VARIABLE COMPRESSION ENGINE
“There’s a new kind of engine under the hood of the new Infiniti QX50,” states CD writer Jared Gall. “Like many of its competitors, it’s a turbocharged 2.0-liter inline-four, but what goes on inside is different from anything that has come before it. For the first time in a production vehicle, there’s an engine that can change its compression ratio and even its displacement (a tiny bit), a project that, according to the company, has taken more than 20 years. Why bother? Varying the compression ratio promises to maximize efficiency whether you’re cruising at part throttle or running toward the redline on 22.0 psi of boost.”

Jared Gall goes on to note, “Infiniti’s VC-T engine (for Variable Compression, Turbocharged) can change how far its pistons rise in its cylinders, which changes the engine’s compression ratio, a parameter that, heretofore, had been fixed. Infiniti’s engine can bump the compression ratio from a low of 8.0:1 to a high of 14.0:1. Changing an engine’s stroke usually requires a new crankshaft. Instead, Infiniti’s engine introduces a joint between the crankshaft and the connecting rods and moves the joint with a computer-controlled arm. In the process of changing how high the pistons move, the mechanism incidentally varies the stroke by 1.2 mm, which causes the engine’s displacement to vary slightly—from 1971 cc (14:1) to 1997 cc (8:1).”

While this technology is yet to prove itself in the long run, the opportunity to capitalize on fuel savings and exploit a plethora of power manipulation options is huge. Infiniti claims fuel usage improvements of between 30 – 35% on both the AWD and FWD models. My experience with the CUV on the second run showed the vehicle to be relatively light on its feet, quick about the city bits and stylish as heck in the driveway. The standout surprise of the QX50 has to be the award winning interior. AJAC liked it so much they gave put it on their “10 BEST INTERIORS LIST” This was in addition to awarding the VC-turbocharged engine a spot on their TOP 10 powertrains of 2019.

But back to the interior. The QX50’s quilty white seats with contrasting piping, brushed metal surfaces and euro-flavourings emanate performance pleasure boat. Big kudos to the design team and seat makers for their inside execution. The nicely wrapped, heated steering wheel was a bloody handsaver during the -845 degree polar vortex climate situation in February. Which when paired with Infiniti’s latest design language, puts the angular FX influenced crossover head and shoulders above the Germans for stylistic dynamism. Oh I went there with that auto-journalista thesaurus reference. But while the profile and 3/4 rear views are the bestest, the frontal section is starting to look perhaps dated.

In terms of power points, once everything is set up proper, the QX50 can move from a standing start to pretty fast with impressive results. Since I didn’t have a stop watch or set my phone to track 0-60 times, I’ll once again pass off the power & performance figures to Car & Driver. I will note in advance that I am no fan of the CVT transmission. While some journos and praise the constant variable-ness of the gearbox, I personally find the design to be a counter-intuitive gimmick that I hope will end up on an island, by itself, with only its variable personality and confusing power delivery ways to keep it company. Much dislike there unfortunately. Infiniti has however done a decent job at designing a system to simulate a regular gearbox. Eight preset ratios are available to give drivers the sense of shifting gears.

“Pulling away from a stop, there’s what feels like a hint of turbo lag,” states Jared Gall. “Some of the hesitation may be due to the continuously variable automatic transmission’s sluggish responses and throttle tuning. Despite the occasional hesitation and springiness of the CVT, the engine provides real punch. All 280 lb-ft of torque are available from 1600 rpm, and the 268 horsepower come in at 5600 rpm. In most driving, there’s enough torque and power to keep the CVT from having to spin the engine past 3000 rpm. Venturing into the tachometer’s upper reaches, we hit 60 mph in 6.5 seconds with our all-wheel-drive test car and dispatched the quarter-mile in 15.1 seconds at 94 mph (151 kph).”

I’m with Jared on the initial hesitation concern. The engine grabs quick once the turbo comes online but there is something just not quite there yet between the turbo, variable engine setup and the CVT. That being said, power does move quick through the band with good linear momentum. Torque delivery down low at 1600 rpm is bloody impressive for a 4-bangered turbo. The thing is whizzy buzzy for sure, which some buyers will appreciate while more Ambien infused consumers might find bothersome.

Variable power/drivetrain modes – Eco, Sport, Standard and Personal allow drivers to adjust key adjustments as usual. In Sport mode things tighten up as promised. In Eco things get downright green and passive. Best mode I found was actually Personal. Not sure what I plugged into the CPU but throttle response and turbo/CVT lag seemed to improve while steering, suspension and other important road clingy bits upped their fun factoring.

With a base price of $44,500 CAD the 2019 offers an AWD package that is both stylish, quick and an engineering wunderkind. Now if an alternative gearbox were to make its way into the mix…