Calgary’s River Passage, a mashup of carefully construed beams on the banks of the Bow

In June of 2013, Calgary and southern Alberta experienced one of the worst flooding events in Canadian history. The flood, which eventually ended up being the most expensive natural disaster in Canadian history, devastated not only residences along the flood plain but also municipal structures around the region like walking bridges, bike pathways, and Leo’s carpet.

One of the public structures that survived the flood was the Weir viewing point on Calgary’s Bow River. Located near the zoo the Weir had previously been designated the ‘Drowning Machine’ for its ability to kill boaters and floaters who ventured over the vortex inducing bump in the water. Of which 20 some people didn’t make it out the other side. 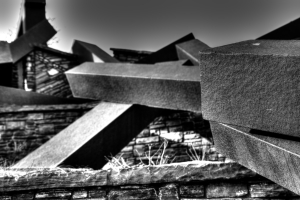 River Passage is organized chaos on the banks of the Bow River (photo. Angus MacKenzie)

A few years back the city and province decided to remove the existing weir and reconfigure the entire area into a series of user friendly channels. Now known as the Harvey Passage/Calgary Weir the area’s two waterways offer either Class III rapids for more experienced floater boaters, or a more gentle floaty Class II designated channel for puddle jumpers and tubers.

But moving on to dry land, overlooking Harvey’s waterworld is a new public art piece that might make up for the stoopid ring project a few km north. Designed by artist Lorna Jordan the ‘River Passage’ appears at first to be a jumbled mass of old creosote soaked railway ties.

According to the artist, she was looking to “integrate process and art, and create public places where the distinctions between nature, art, and technology are blurred and our experience of life-sustaining systems is heightened.”

As part of a $3.12 million budget the River Passage space offers visitors a series of terraces and an enclosed ‘grotto-like’ seating area in which to view river blubbers and seagulls. The kids they be loving the angular, sliding, climbing opportunities the large beams offer while the grotto area is perfect for kids to illicitly smoke the DuMaurier Lights.

The oversized substantial beams are clearly strewn about with intent. The purposeful chaos appears to be inspired by both the 2013 flood-tastrophe and the area’s connection to its industrial past and nature.

The River Passage space is semi-remote, accessed only by bike path or walking from the nearby fishy farm. The piece is anything but subtle but deserves kudos for its in your face with a railway tie design and interactive aspects.

2 thoughts on “Calgary’s River Passage, a mashup of carefully construed beams on the banks of the Bow”