You may be 8, 18 or 48, but admit it, when you walk by that Lego store in the mall, the one next to the Foot Locker, and you see that 1,100 piece Mini Cooper in authentic British Racing Green…tell me you don’t want to say to heck with those social stigmas! I’m going to acquire that gloriously detailed, hipster-curtained VW Microbus – complete with pop-up roof – and I will build it in the comfort of mine own home and I shall enjoy it for many days…until the wife makes me move it to the den.

While I personally haven’t dropped pesos on LEGO products in many years I will admit those sneaky Danish plastic-pushers have seriously upped their blocky automotive offerings this year.

From the Dark Knight’s killer black Tumbler to the throw-back brilliance of the VW CamperVan to the not quite the same as a Delorean Back to the Future DeLorean, here’s our Top 5 automotive/Campervan picks of 2014. It would be terribly immature to wish for any one of these models for Christmas, however I personally wouldn’t kick the MIni Cooper or VW CamperVan out of bed for shedding blocks.
Clik the gallery to see more detailed selections

Taking certain liberties with the original’s design, this scaled down Lego version of the 80”s classic features your own teeny tiny Doc Brown, Marty McFly, a non-hovering hoverboard and a booklet containing production notes, original images and details from the movie.

The model itself, while not made of stainless steel and not running a self-destructing Volvo V6, does however offer collectors cool things like gull-wing doors that actually freaking open, fold-up wheels, a non-functioning flux capacitor and time travel display. Lego is also throwing in extra engines and wheels to recreate the various filmatic versions. This model is labelled 10+ and includes 401 pieces making it a challenge for most any person over 45.

Marty you need to be going at least 88 mph!

This little English bugger right here is a crowd favourite. Super detailed throughout this early days MINI Cooper Mk VII not only comes in British Racing Green but includes opening hood, hatch, doors and a removable roof to gaze upon the pixelated tan interior. Bloody hell!

Bangers and mash! Look under the Mini badged hood and you’ll find a realistic engine bay complete with detailed 4-banger and air cleaners or something. Inside the plastic cabin you’ll find a veneer-style dashboard, steering wheel that turns, and a moveable gearshift and handbrake. Lego says no MINI Cooper would be complete without a picnic basket and blanket, so they threw in a doll sized version just because.

At 1,077 pieces the MINI Cooper measures out an impressive 25 cm long by 11cm tall and 14cm wide. This wee hyper detailed plastic compilation of British kit is surely to make it to my Xmas list this year!

Under the category of blocky rides Lego should build, this Caterham Super 7 submission by an open wheel enthusiast only needs 8,800 or so more votes to make it to the judging benchmark. Unfortunately the likelihood of this specialized bit of British open-aired kit making it to production are slim. Bloody kudos for trying I say. Read more about this plastic pusher’s story for Lego glory HERE

This Dark Knight rider project of 1,869 pieces has been so popular this year the kit is sold out until a week before Christmas.

Measuring out at a Gotham sized 15 in. long by 5 in. tall, and 9 in. across the hips this all-black w/ gold trimmed Tumbler by Batman is one you’ll not wish to step on in the dark while going off to the pee pee.

Those big industrial sized tires on the front that I never had as a kid, they’re brand new for this model. Lego has gone to the trouble of detailing the living bejeezus out of the model’s interior with authentic stickerings, and faux instrument panels. Wings mounted out back are also adjustable. And like the Back to the Future kit this one comes with white eyed Batman and hauntingly accurate Heath Ledger Joker figure. Complete with clampy grabby hands.

If you can get your hands on one for Xmas, the Darkish Knight’s Tumbler will set you back a mere $299 Canadian. 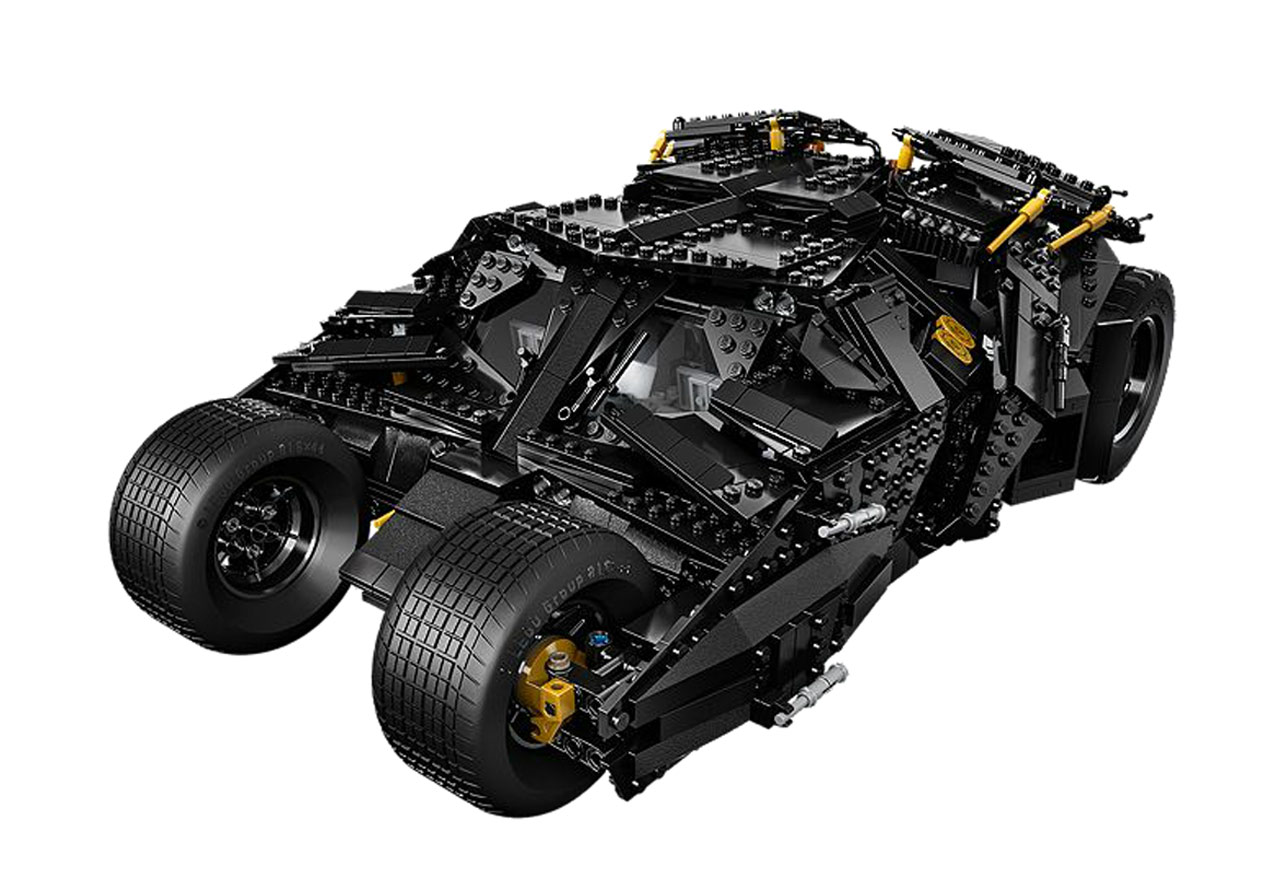 At just over 1,300 pieces this flashback from 1962 is bound to generate serious retail interest from Gen X’ers around the world. Featuring a ‘splittie’ front windshield and pop-up roof the VW T1 Camper Van is recommended for 16+ individuals so aging hipsters shouldn’t feel too bad when they lie about their purchase.

Like the Mini Cooper this compendium of plastic engineering comes with the full 11 window treatment, plaid-print textile curtains, wing mirror, textile curtain surround, roof rack, rear and side air intake vents. Like the Mini the engine compartment of the bus also opens up to show off the detailed air cooled boxer engine.

That might seem like enough but Lego said no. Inside the Campervan is about as detailed as you can get with tiny molded plastic. The interior features a rear bench seat that transforms into a bed, a folding dinette table to save space, and a closet with mirror. Up in the driver’s area Lego has recreated the front bench seat, a Lego embossed gear stick, intricate angled dashboard and the ever iconic spherical speedometer.

Lego’s pretty freaking outstanding VW T1 Camper Van  measures out at 11.8 inches (30cm) long and about 5.5 inches (14cm) tall and will only set you back $129 Canadian pesos this holiday season. 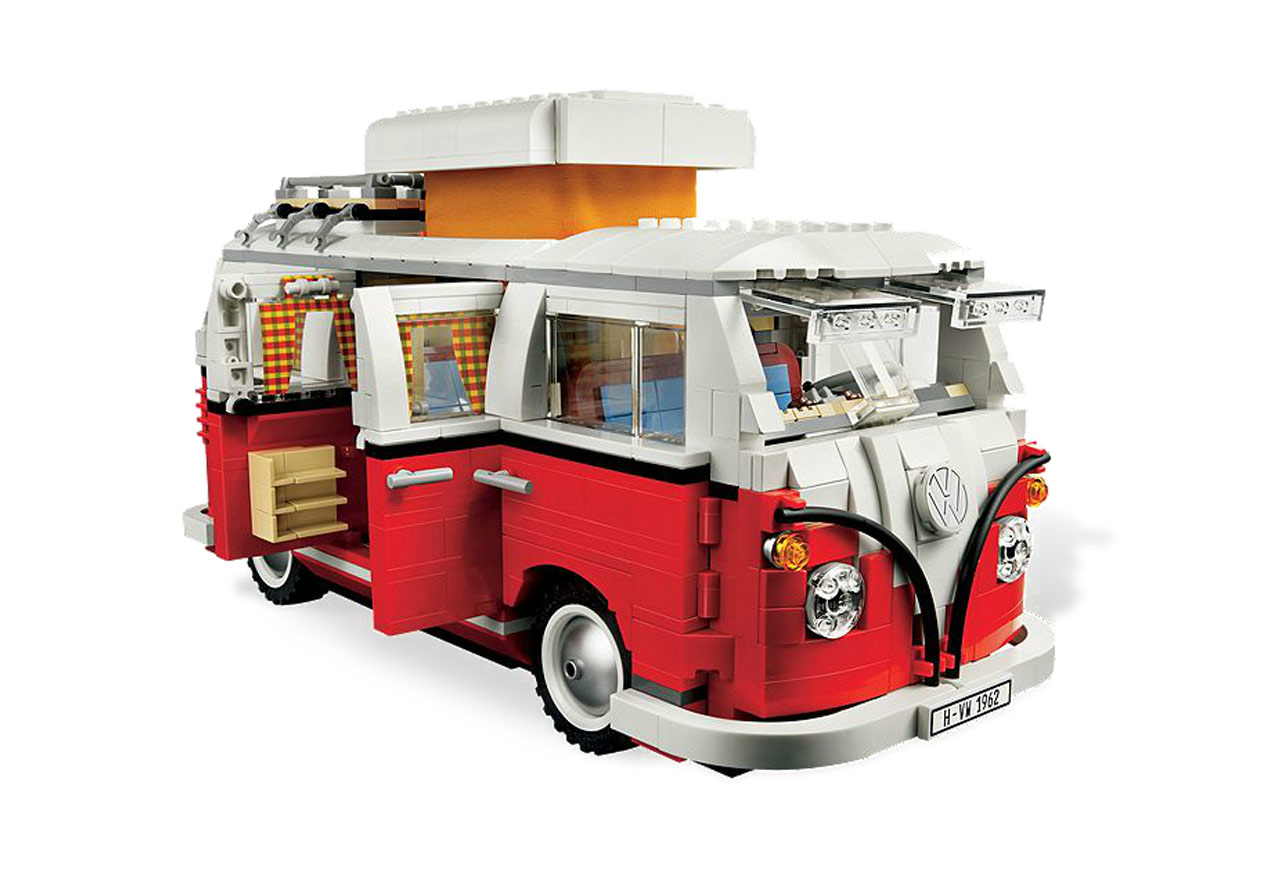