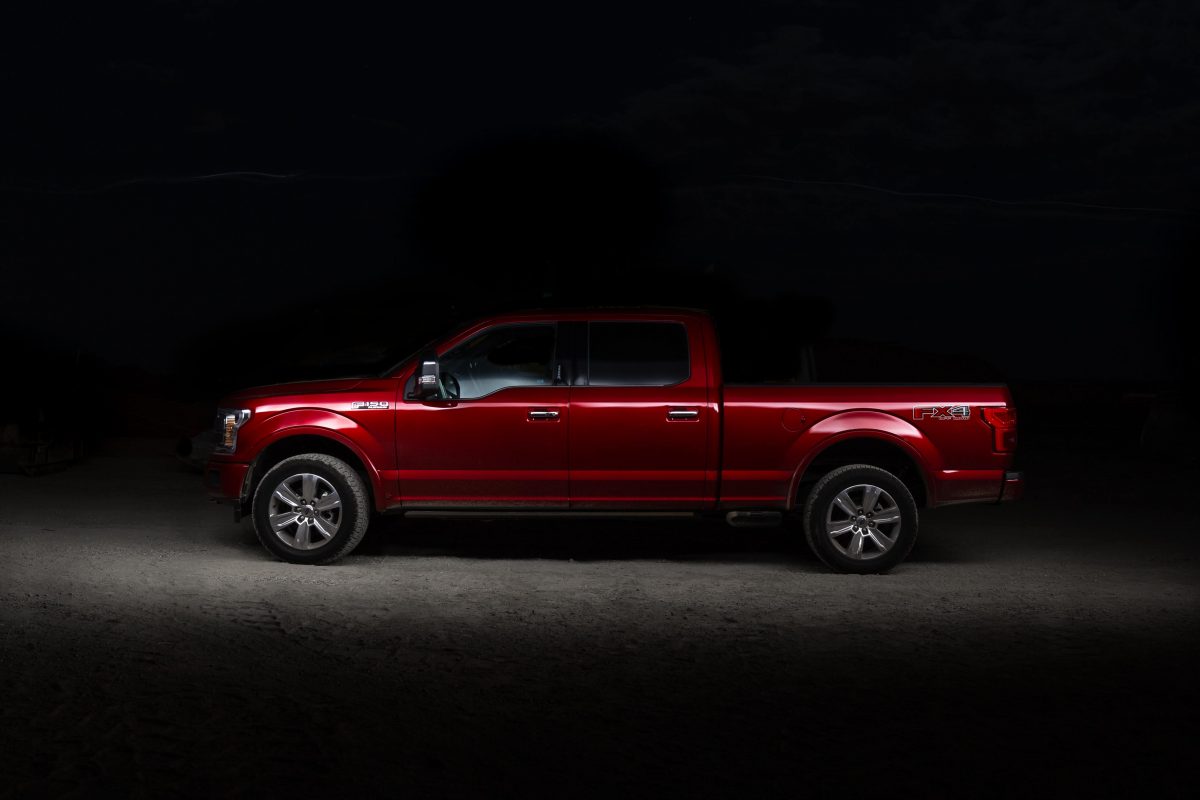 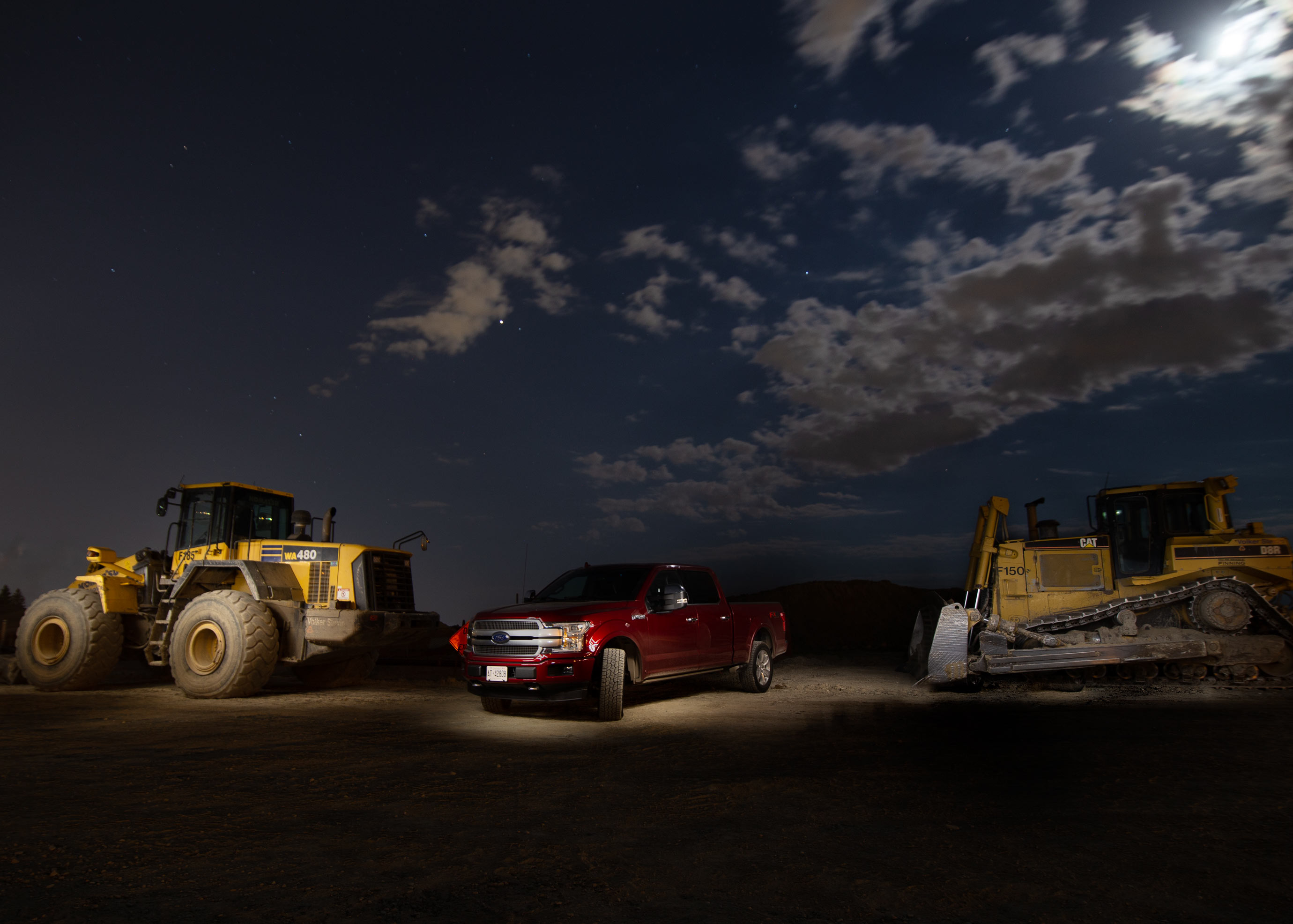 Starting at $67,589 Canadian, Ford’s ubiquitous F-150 remains one of the best selling pick em up trucks in Canada. Born exactly 70 years ago this year, the F-150 was introduced in 1948 as a replacement for the car-based pickups introduced in 1942. Back then, the F-Series was sold in eight different weight ratings, with pickup, panel truck, cab-over engine (COE), conventional truck, and school bus chassis body styles. 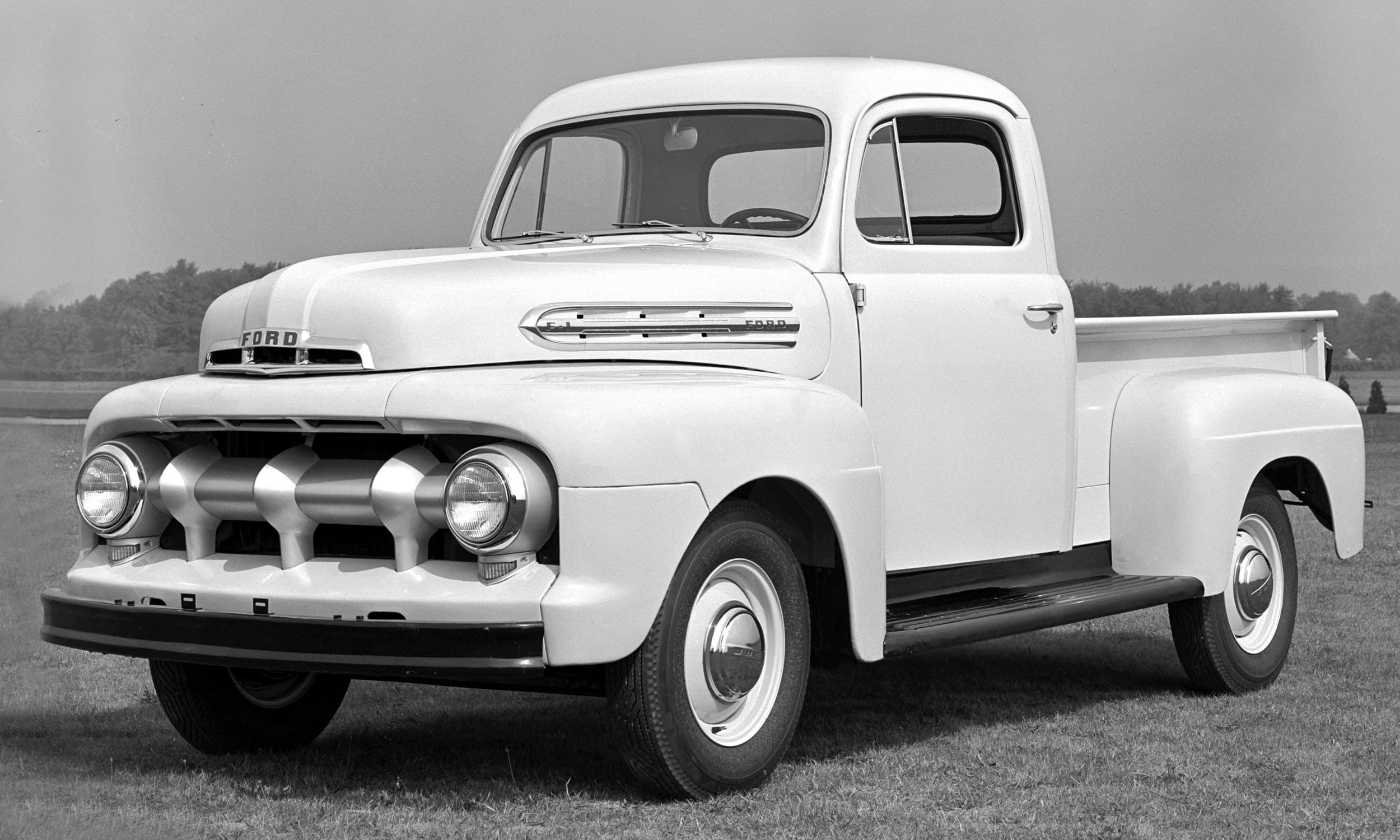 My fav years be Generation 2 when the design transformed from that of a plain work truck to a stylized mixed use vehicle. A flowing, scalloped hood rising from big flarey, bulbous fenders, a proportionally oversized cabin area, stepsides and a simple bed design made the models from 1953-56 the coolest and most aesthetically interesting of the generations. 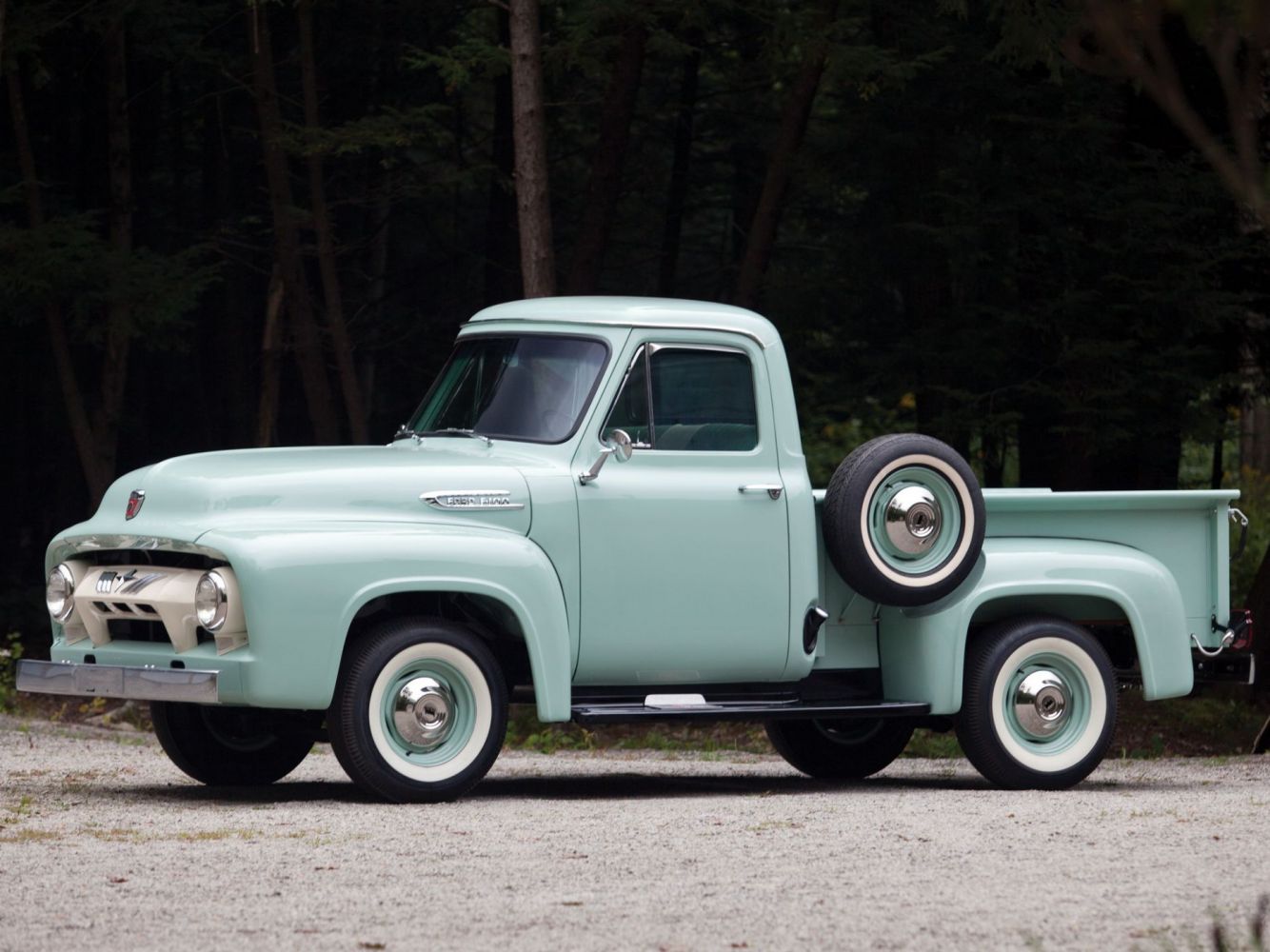 My friend owned a 5th generation 70’s era pale blue F-150 that his dad passed down to him in the fashionably disastrous 80s. Minimalist, bouncy, trucky, reliable, jarring were terms I’d apply to that squared off iconic model. Generation 6 & 7 kept most of the design attributes of the 1967-72 with revisions to the grille, cab and waste line. Safety updates included front disc brakes and the genius concept of moving the gas tank from inside the cab, behind the seat, to outside under the bed. 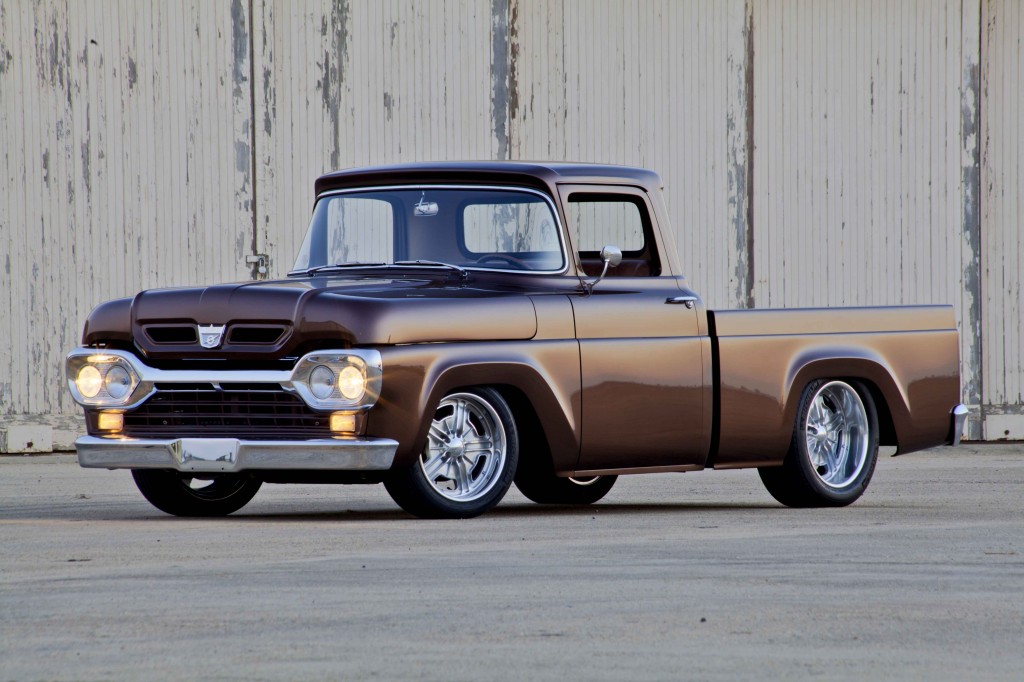 From 1992 – 97 9th-generation F-150s received another design change. In addition to a lower hoodline, the F-150’s square bits got rounded off around the grille and fenders. This generation was also the first to introduce the “performance” model in the form of the SVT Lightning. What at the time seemed like a whole bunch of power, the SVT used a specially built a 240 hp/340 ft.lb 5.8 litre V8 to get about. Handling components received assistance and input from none other than the legendary Scotsman himself, Jackie Stewart. Capable of pulling .88 g’s on the skidpad, the Lightning’s handling abilities were impressive for a truck. 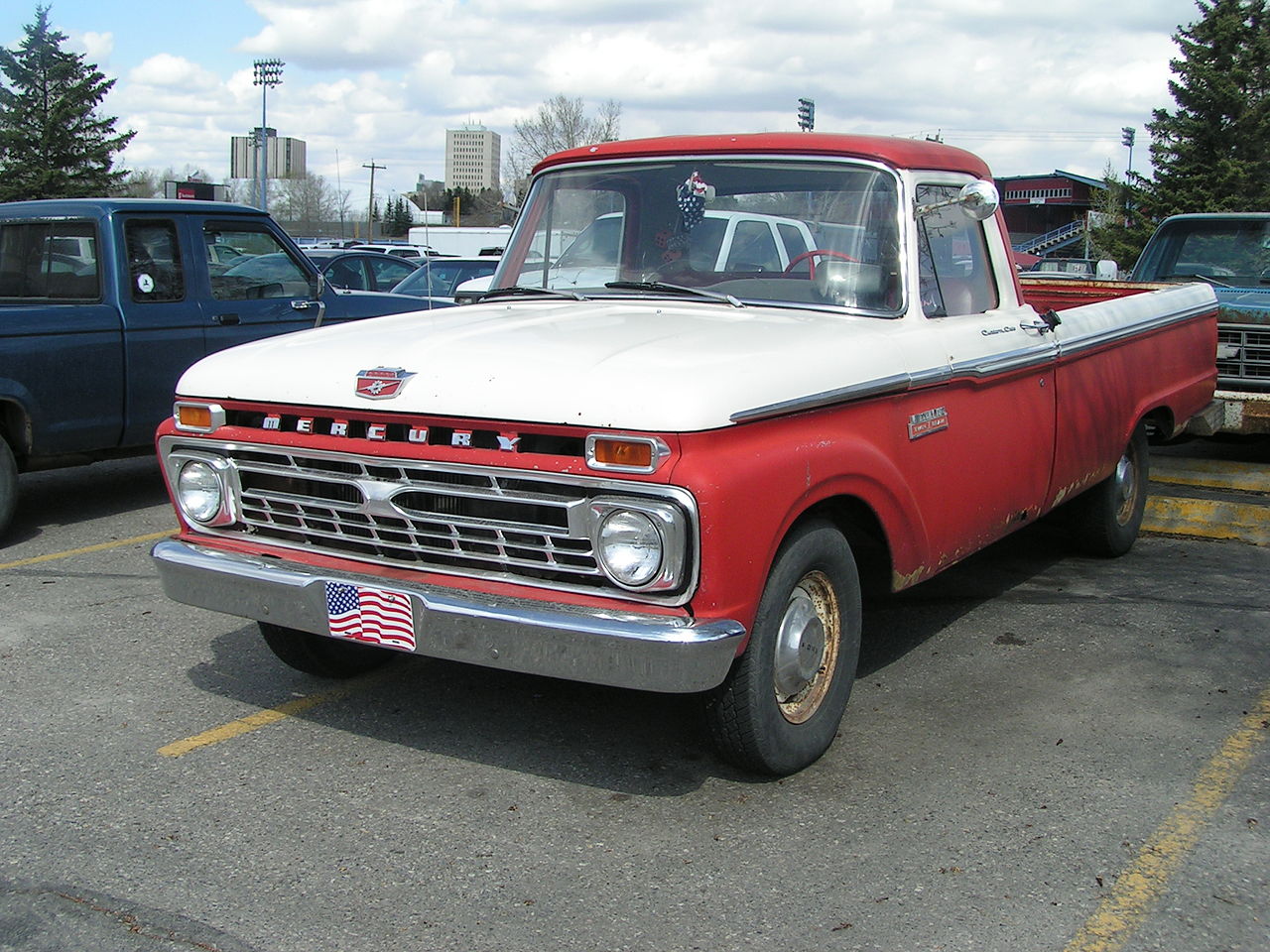 10th and 11th generations done got all slopey in the nose region. This was the first big redesign since 1979 and the softer design, supposedly based on aerodynamic inputs, was initially met with criticism. But in 2001 sales of the F-150 jumped from 750,000 to 900,000 units showing that the softer was better. Temporarily. The Lightning got way faster while models like the Flareside, Harley Davidson, King Ranch and the Supercrew Offroad 4×4 gave truck lovers something to get up on.

From 2009 – 2014 the 12th gen trucksters received more fascia updates, a lighter stronger chassis, funkier interior and the introduction of the 411 hp V8 equipped desert-racing Raptor. This was also the generation that started using Ford’s fast making twin-turbo EcoBoost V6. The 12th gen can be identified by the embossed fender treatment over the wheel arches. 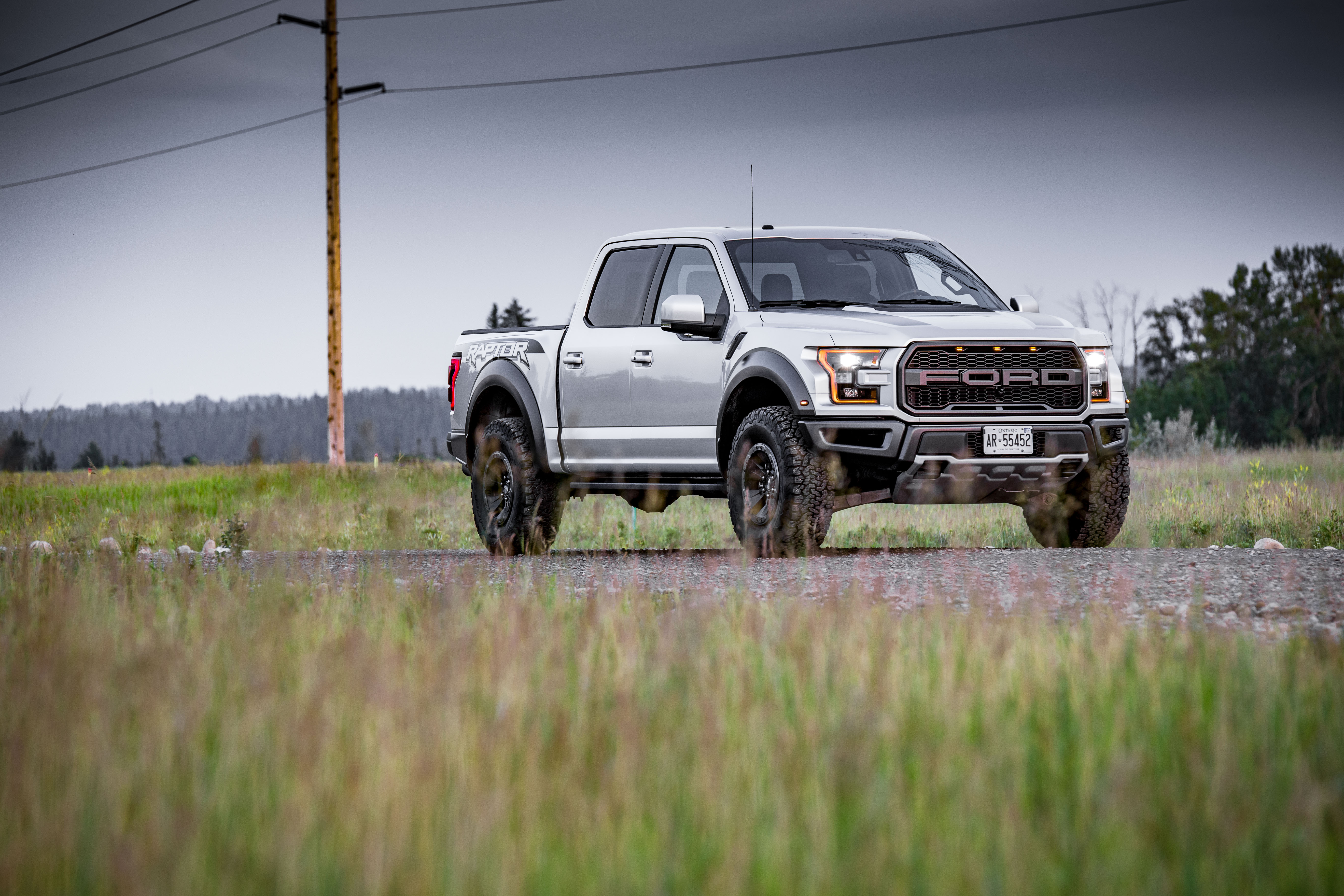 And that brings us the current generation. Running from 2015 until right about now, Generation 13 F-150s were the first to use an all aluminum body. Ford actually used prototype mules disguised as Gen 12s in the Baja 1000 to test the new body’s integrity and durability. V6 powerplants started to dominate the engine offerings while the Raptor’s powerplant took the ecoboost 6-banger to a new level. Capable of developing 450 hp and some 510 ft lb of torque, Ford showed how a smaller lighter powerplant could surpass its predecessor by 40 hp with two less cylinders. Drive impressions and video of the 2017 Raptor can be found in the elemente archives

My tester for this F-series history lesson was a 2018 F-150 Platinum edition crewcab/supercab. Decked out in shiny burgundy paint finish our 13th Generation F-150 came equipped with a 5.0L Ti-VCT V8. Good for 395 hp and 400 ft.lb of torque the engine used stuff like “twin independent variable cam timing” and direct injection fuel delivery systems. Overall the powerplant felt up to the job of most city runabout duties. The variable cam setup and direct injection provided quality throttle response with a mid-range power band around the 3800 rpm mark. I personally in a truck like this would like to have seen either the beefed up twin-turbo V6 similar to the Raptors, but not as aggressive. Or a diesel variation to push the torque figures up.

As I’m not a truck guy, getting my head around moving something with 2.5 metre width dimensions (mirrors out) about Superstore’s cramped parking spots created cognitive dissonance. At 5.789 metres from tip to tail the F-150 is a long beasty to maneuver. Out where cows mingle wide and long would be a welcome thing I’m guessing. In the city, those numbers start to become algebraic in application.

Handy inside stuff like a 110-volt/400-watt Power Inverter, fully flat load floor with foldable rear seats and a dome light are welcome things. Tricked out in 4×4 trim, the F-150 featured Tow/Haul, Snow/Wet, EcoSelect and Sport Modes via an electronic 10-speed gearbox. No shortage of gear options here. 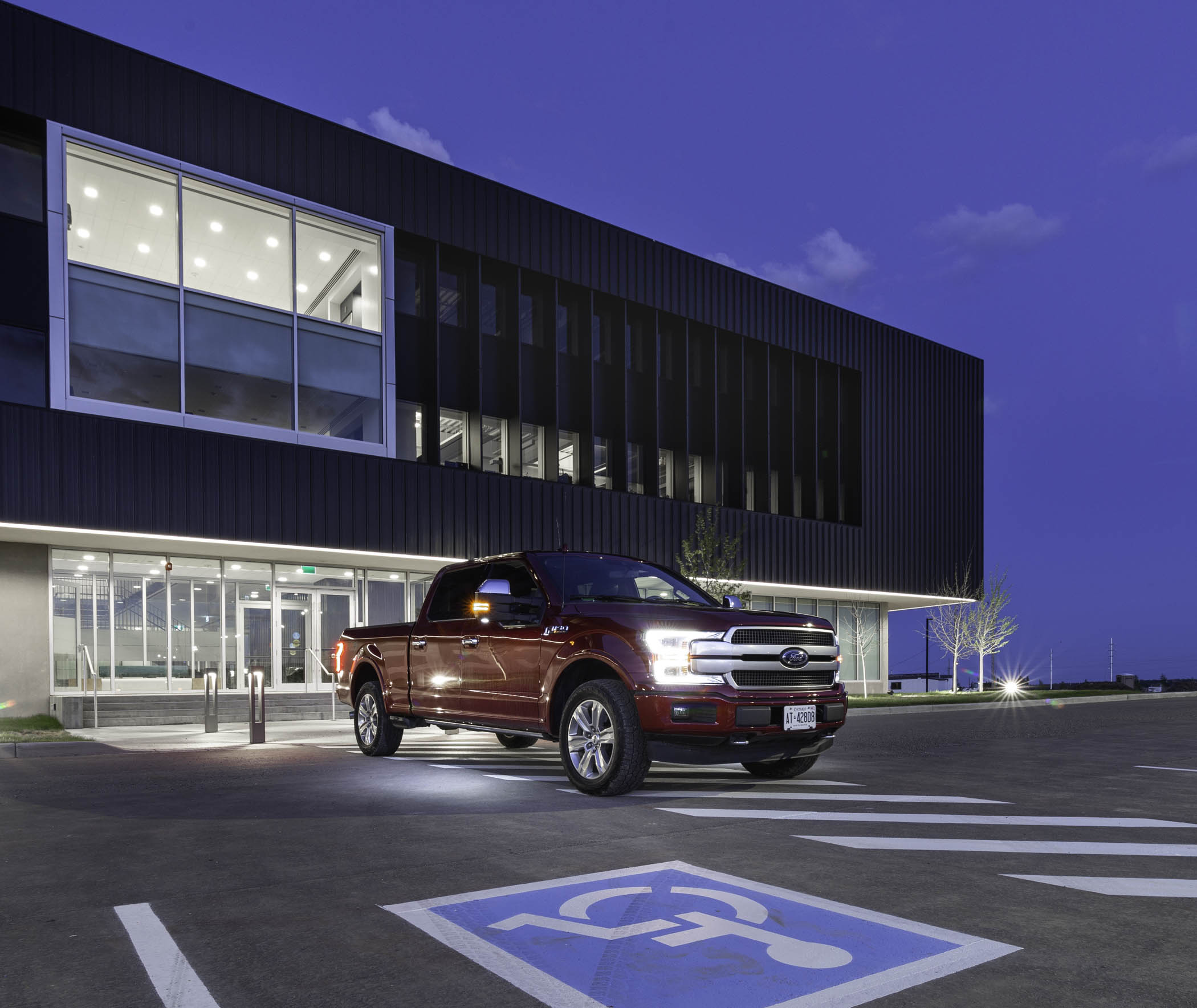 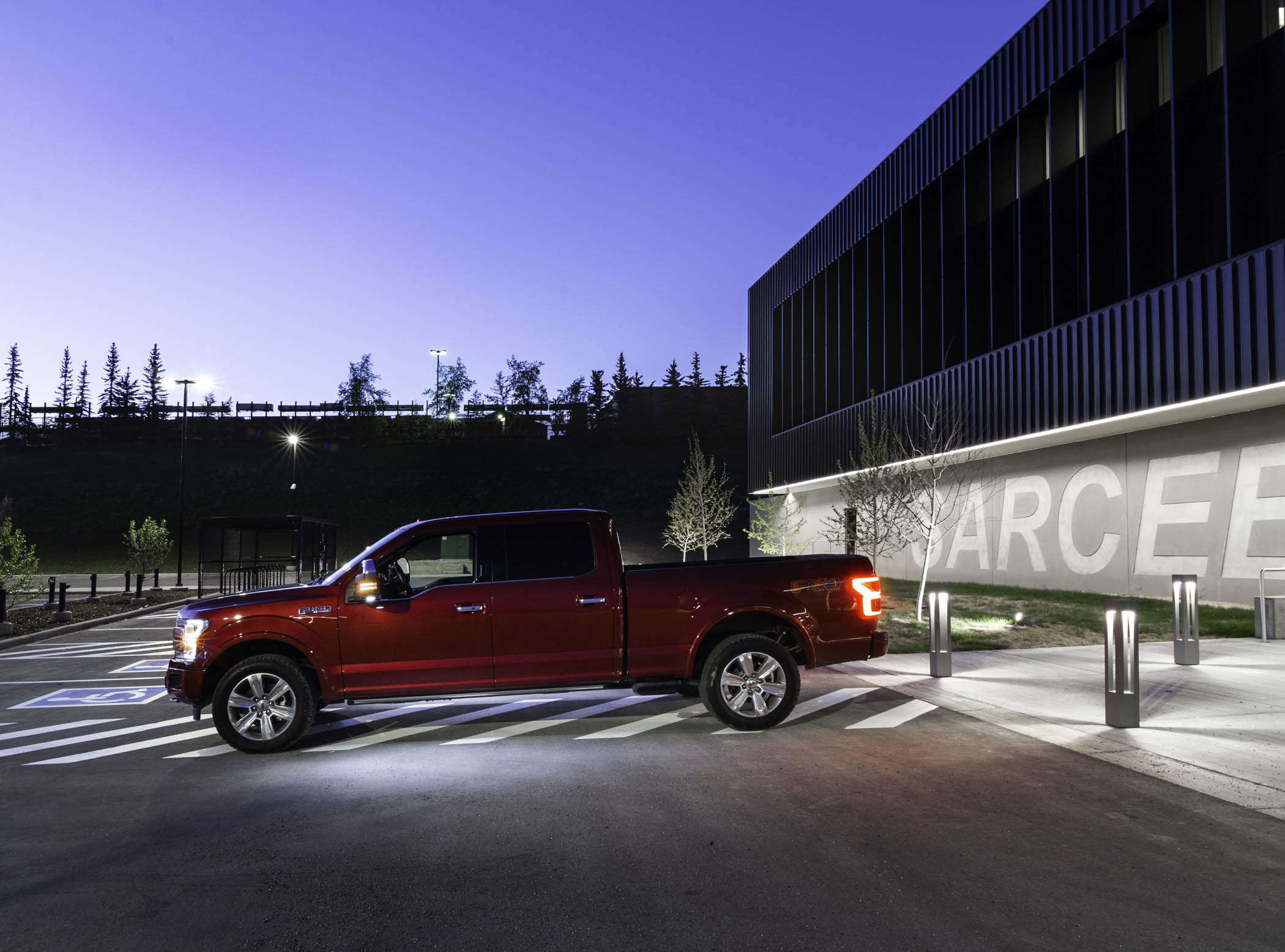 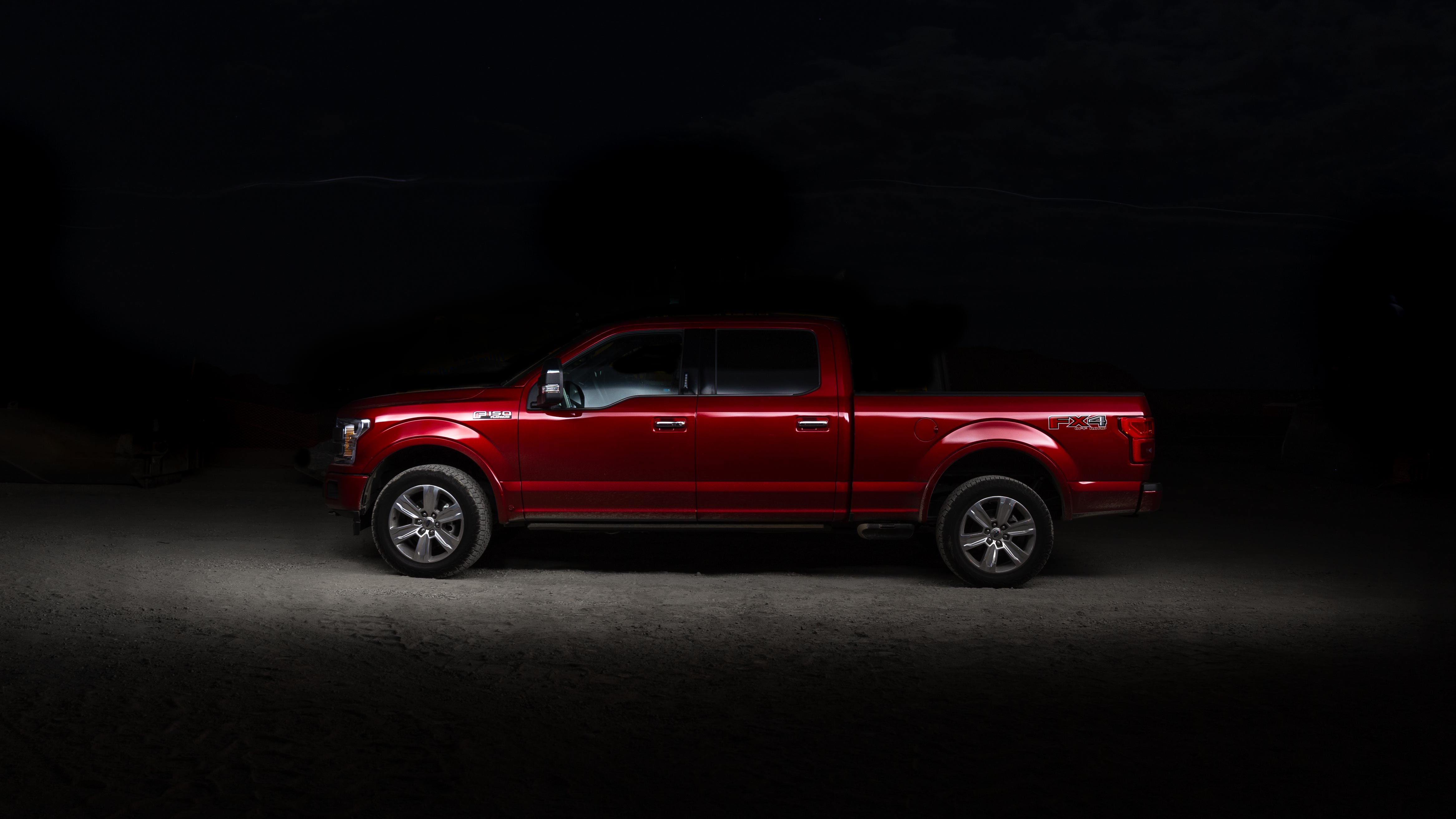 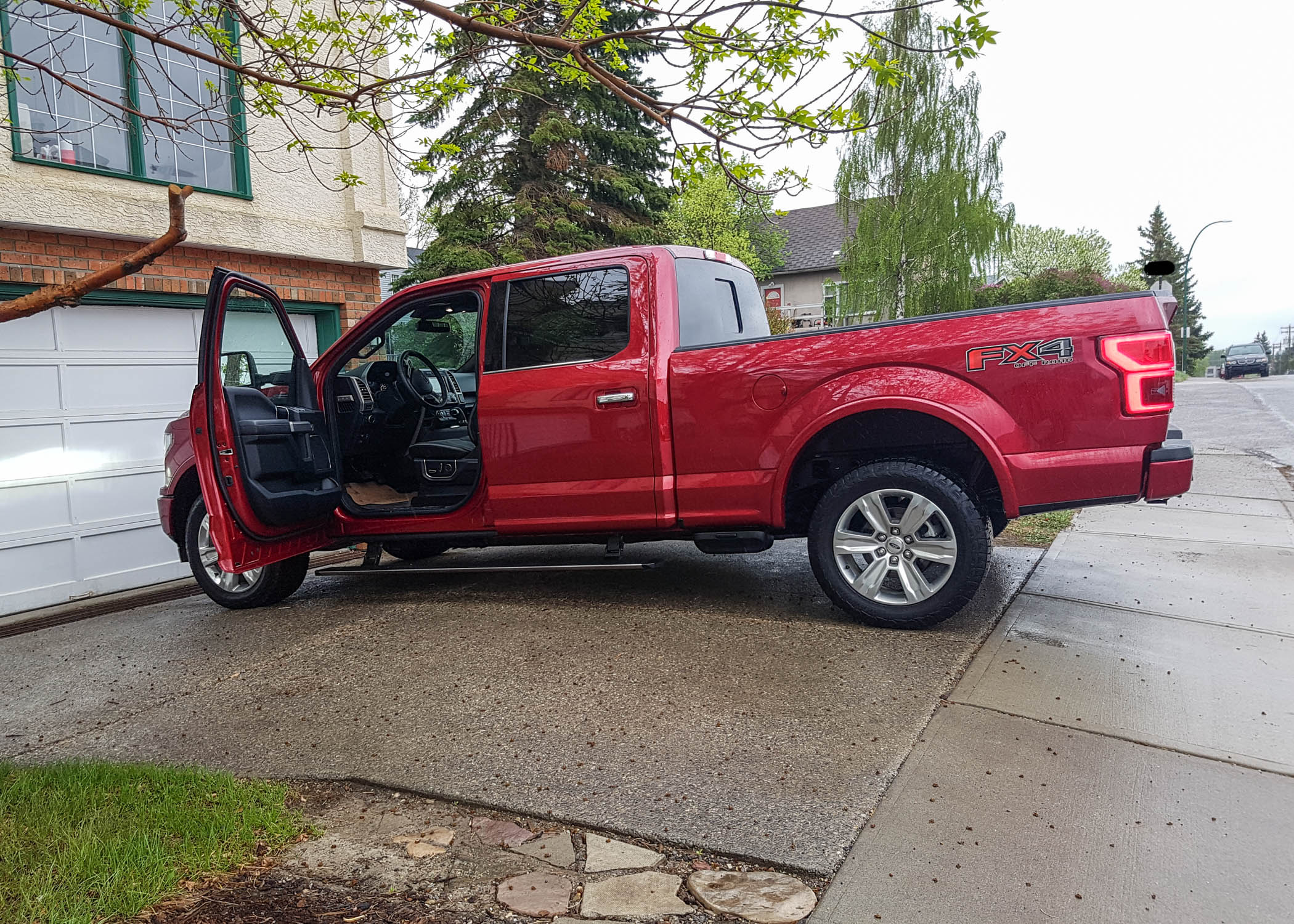 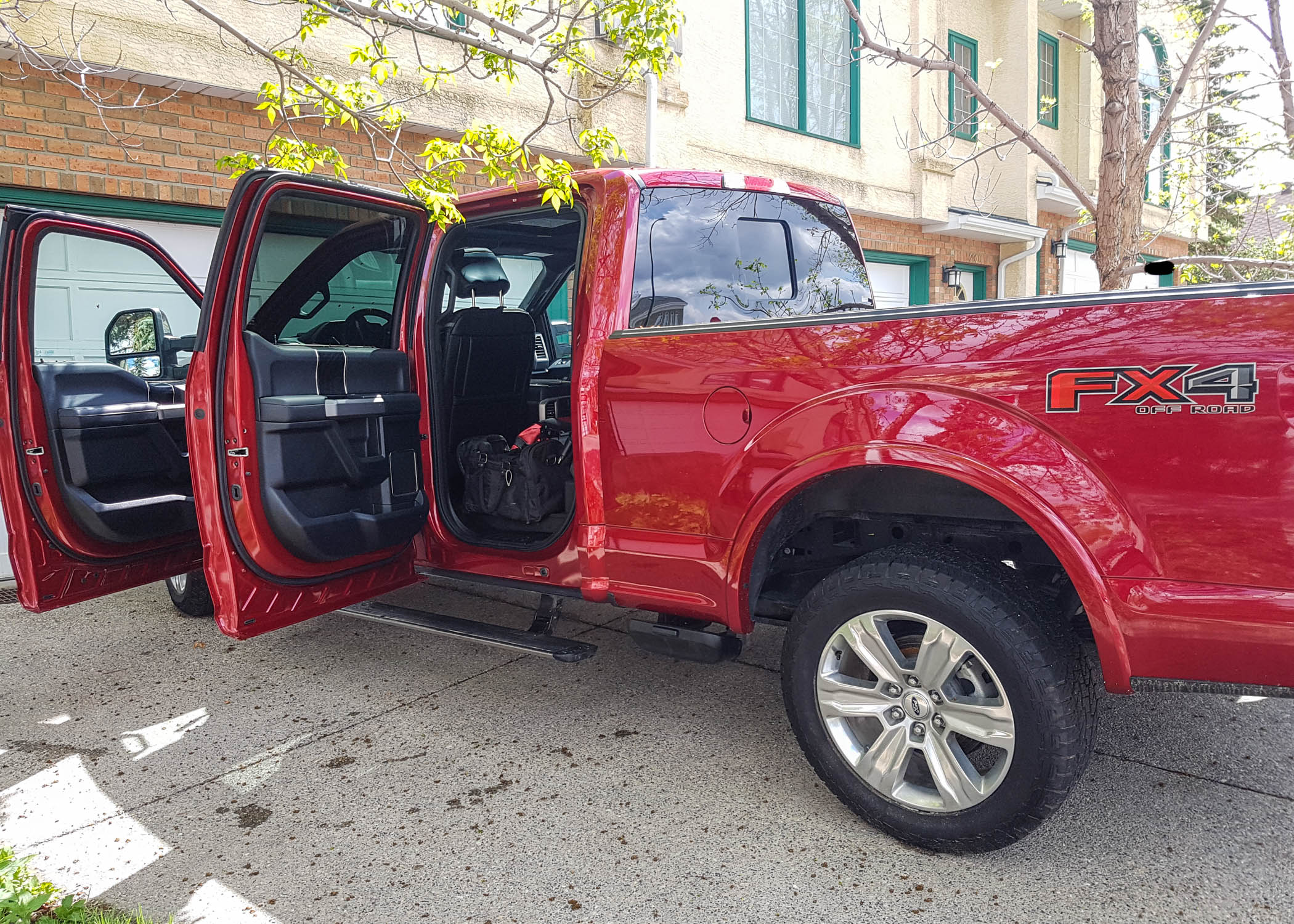 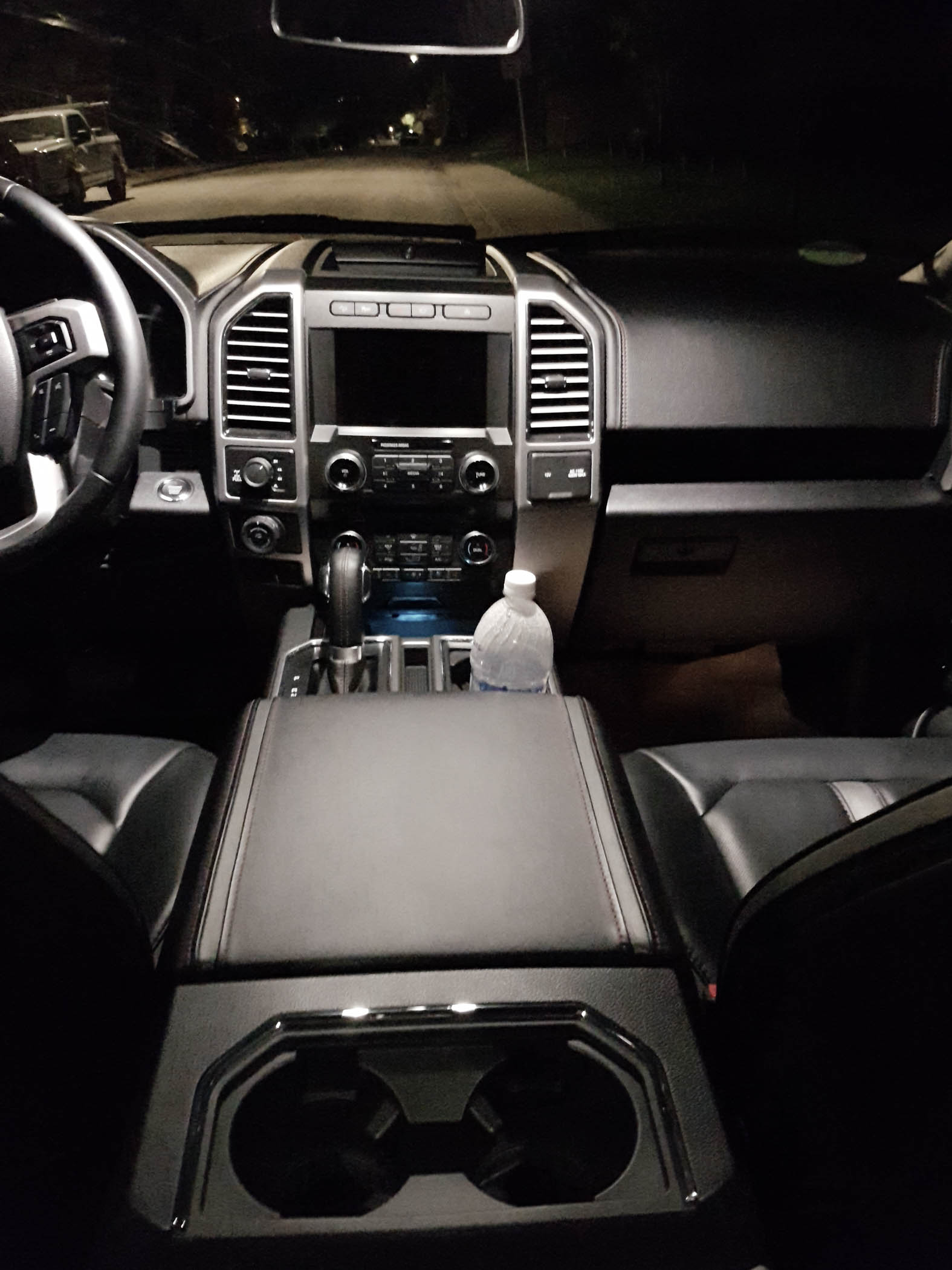 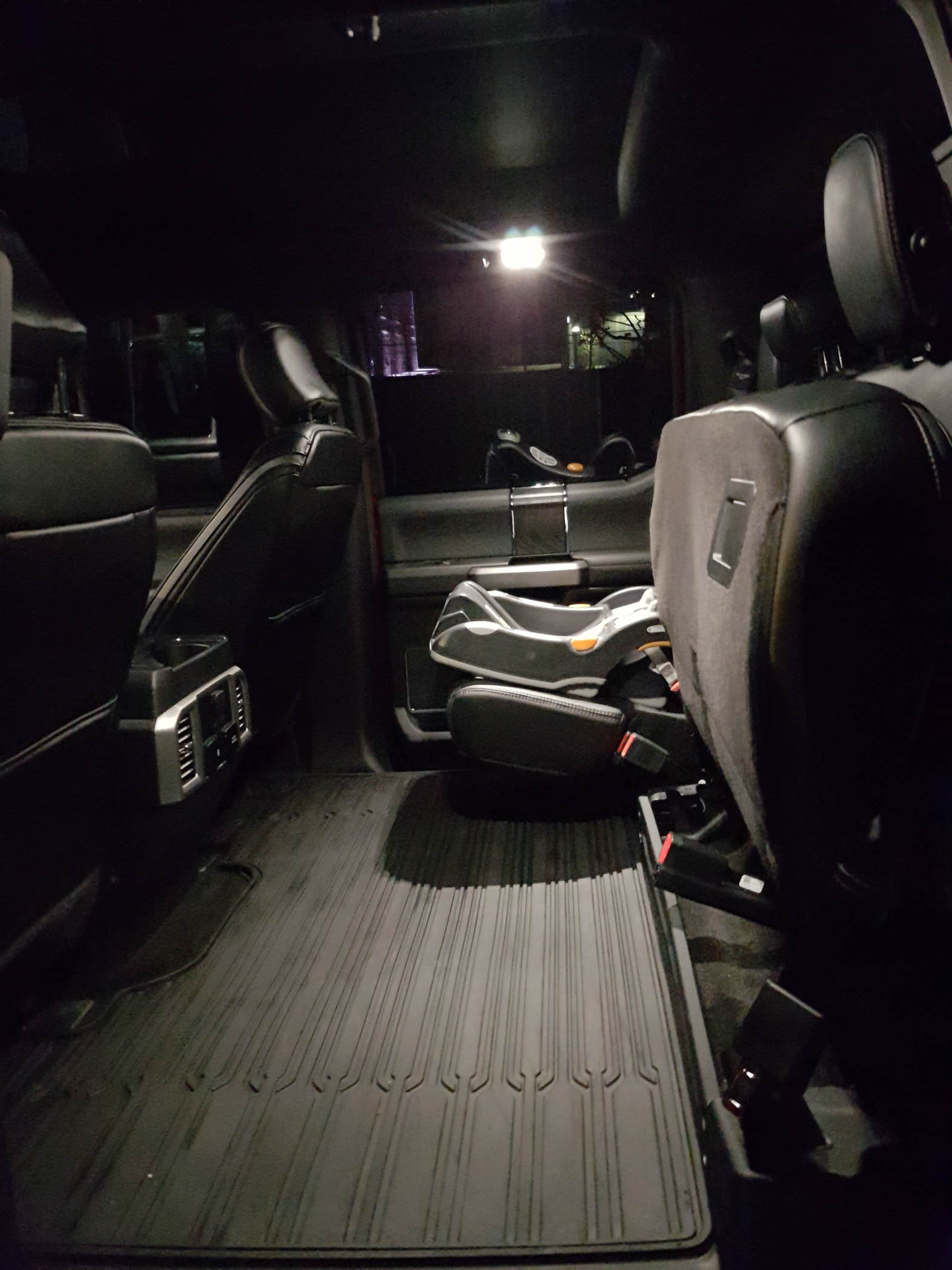