Between the major military conflicts of the last hundred years where Canada has participated, approximately 117,316 soldiers have lost their lives in battle. To pay respect to those fallen on the field during WWI, Calgary in 1922 planted a tree for every one of the 68,000 soldiers lost. The stretch of road running parallel to the Bow River near the city’s downtown core has for the past 90 or so years been known as Memorial Drive. But in 2013 Marc Boutin Architects, in collaboration with the City of Calgary, Stantec and federal veteran departments, unveiled a new memorial site in the form of Poppy Plaza.

The Poppy Plaza project presented Boutin and his team with a number of challenges. How to connect contrasting access points to the site was one concern, was how to access the river, but most important was the creation of a space that could accommodate large events, informal gatherings, while still remaining an incl

Wood & steel were chosen for their “abilities to transform and facilitate site-specific framing while opening up the space in which to engage and inform the public.”

usive commemorative voice for the space.
Located on the corner of Memorial Drive and 10th Street N.W. Poppy Plaza is designed to re-honour those fallen military members in a more contemporary narrative. The 86,100 square foot (8000 sq.m) plaza, organized around either side of the 10th Street Bridge is organized around two surfaces. 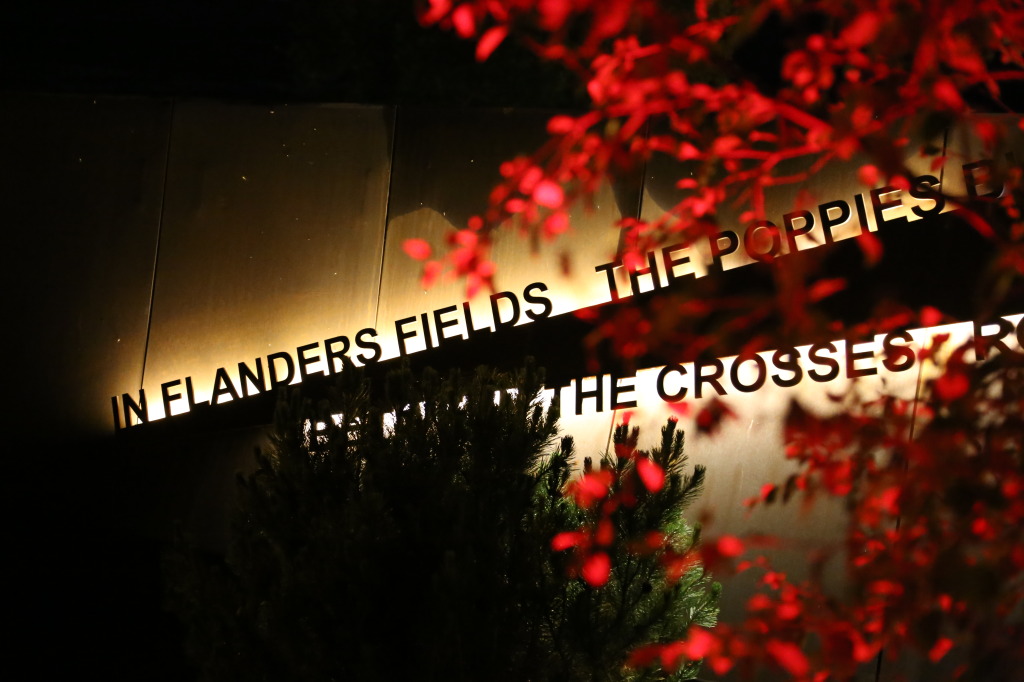 First, on the west side of the bridge Boutin and his team chose to use a folded wood deck made of low-maintenance Balau wood as a design dedication in honour of the existing heritage tree. Underlighting on the decks many gravity defying benches not only cast light outward towards the river but also illuminate the water-cut poppies and maple leafs designed into the supporting metal arms. The second critical design element of the site is a “weathering steel wall that navigates the steep grade along the riverbank.” The steel wall is more functional than decorative in its mandate of protecting the wood deck from Calgary’s ice flows in the winter. The two surfaces of wood and steel were specifically chosen for their “abilities to transform and facilitate site-specific framing while opening up the space to different opportunities in which to engage and inform the public.”

The wood deck surfacing was chosen to not only act as a “singular, continuous surface” but because of the site’s topography, the material helps bring together varying spaces while simultaneously dealing with several grade changes. The primary deck area, with its unique seating program is also populated by a grove of new Aspen trees. These Aspens, underlit by deck mounted pot lighting, when viewed at night take on an almost transformative poppy-like demeanour in their red hued form.

Two stairways, one each side of the bridge, allow visitors access down to the bike lane /walking path on the river’s edge. Along the stairways and pathway a series of memorial narratives and quotes from various sources are water-jet cut into heavy steel surfaces. These back-lit quotes from world leaders and Canadian citizens not only speak to “the sacrifice, honour, and hope associated with periods of conflict” but provide a poignant voice to the site, providing context to the space and added rationale behind its mandate.

According to the architect, “Lighting was used to stir emotion and evoke a sense of respect, awe and introspection tuned to memorialisation. Two illuminated sentinels were placed on the south bank of the river, framed by the visitor’s decent through the steel-cut quotes on the north side of the river.

On either side of the bridge reside massive angular steel sentinels. Rising up approximately 25 feet above the street, the skyward reaching twin elements appear to be almost torch like or victorious in their design. In a commemorative, narrative act, a quote from “Flanders Fields”, residing on a rising water-cut elemente at the foot of the ‘steel torches’, forces the eye upwards in an obvious manner.

The architect’s intentional use of angular, aggressive movement and forms in the site’s build was clearly designed to change visitors perspective as they engage with the plaza’s various elements. Whereas giant assed metallic letters spelling out MEMORIAL on the site’s western edge are less than subtle in their loud yelly presentation. Whereas the type treatment and staggering is a cool effect, and does draw the eye to the site, the execution of the oversized lettering comes off as perhaps too extreme for the site’s commemorative mandate.

Poppy Plaza is the first of a series of planned nodes along The Landscape of Memory, a 9.5 km pathway project running parallel to Calgary’s Memorial Drive.

LEGO to unleash 2,996 piece S.H.I.E.L.D Helicarrier on your hardwood
CALGARY’S SPARK SCIENCE CENTRE…IT HAS BLINDED ME WITH THE SCIENCE!