The highly regarded piece of elder material from another time known as the ‘Shroud of Turin’ is known to pretty much any and all Christians. One extremely rare 1953 Abarth 1100 Ghia on the other hand is known only by a few but still carries with it a shroud of mystery and its own religious scorpion-based following.

Initially shown at the 1953 Turin Auto Show in Italy this one-off, hand-crafted Abarth 1100 Ghia went missing for many years following the show. Eventually it turned up next to a barn in the US. After some negotiations the car made its way to a more caring, loving home somewhere in Western Canada. The car you see here was photographed in its semi-unfinished state, however what these images do show is how cool the car looks with its barren sheet metal finish. 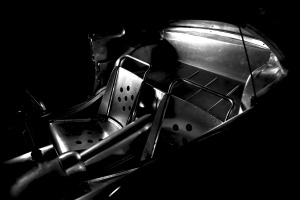 The images shot last year not only reveal the amount of painstaking detail that has gone into the body but also into items that needed to be recreated from scratch. The gauge panel on the dash for instance, failed to exist when the car was rescued. But the owner being the ever innovative person found an old shot of the interior showing the original dashboard. That low res, grainy photo was then sent off to a highly specialized shop in Italy where the gauges were beautifully recreated.

The nose-bullet thing that looks like a missile hatch from a Bond car was also recreated by hand from historical pictures. Other critical items that had to be remade by hand included: the inside door handles, tail lights, side trim, and interior trim.

According to one of the comments on the ‘Alfa BB’ forum, “The Abarth 1100 Ghia has an Abarth-built chassis. It uses some Fiat-based mechanical components. It was labeled “103” at times because it came out in 1953 concurrently with the presentation of the Fiat 1100/103. The styling came from Mario Boano’s Ghia with heavy influences from Virgil Exner and Giovanni Savonuzzi, neither of whom seem to have been involved directly with the creation of either the Abarth or the Simca.

The Abarth 1100 Ghia is currently undergoing its finishing restoration where it will be repainted to what the owner believes is the car’s true colour. Under the hood where I didn’t shoot, resides Fiat 1100-103 powerplant, with Abarth mods, including twin-carb arrangement and custom exhaust. According the owner the interior and other accoutrements will also be finished out to concours standards in time for next year’s shows.