In 2013 when I first drove Infiniti’s completely redesigned, uber-gimmicky Q50, I was liking the car but not liking of the gimmicky, invasive granny state of the steering arrangement. But years have passed. I’ve grown a shirt size. Harper’s out of office and I’m now liking of the Q50S AWD Hybrid thanks to week long researching time in Ontario’s cottage country.

First off, I’d not had the chance to drive the hybrid at the Infiniti sponsored media event two years ago. Big difference. Secondly, by cutting out the corner muddling computer interference, the car becomes completely reasonable. Still lacking the tactile inputs of a mechanical system but otherwise solid. 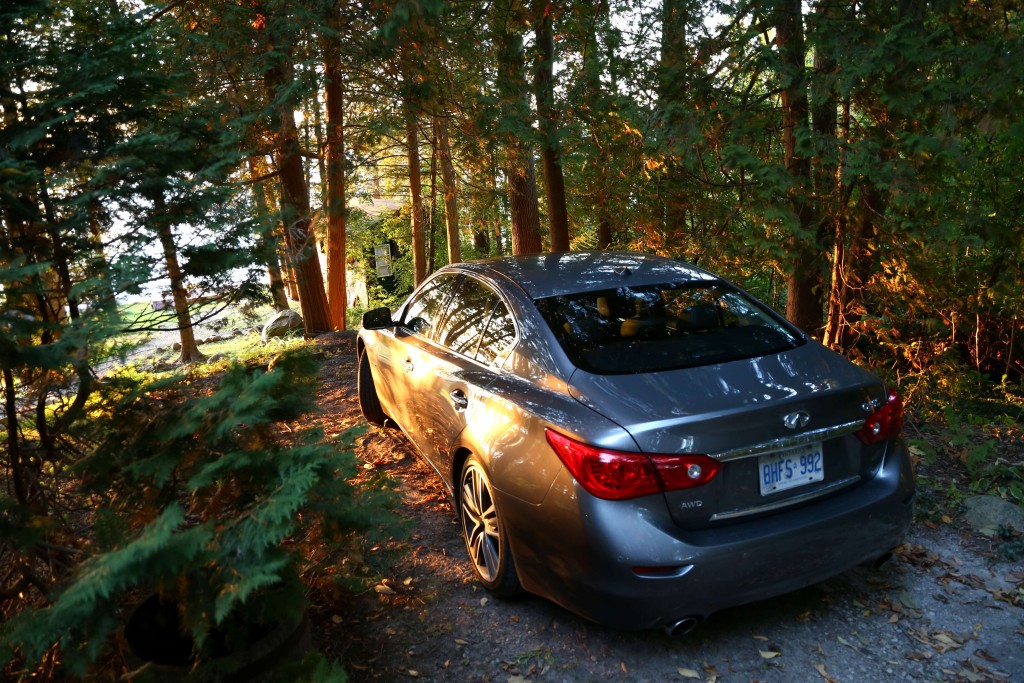 For anyone who’s ever used the dedicated steering wheel and floor pedals whilst driving Forza at Carlos’ place will understand the false feeling of computer generated wheel feedback. With no physical connection to the wheels the computer, relying on billions and billions of data inputs, decides the best resistance and feedback to the steering wheel.

Infiniti calls the optional system ‘Direct Adaptive Steering’. On paper, it all sounds good. The system adapts to the road, removing jiggly tiresome feedbacks from the wheel so you’ll arrive fresh and revitalized.

According the press piece, “Infiniti’s Direct Adaptive Steering technology, a world’s first production vehicle design, allows independent control of the Q50’s tire angle and steering inputs and transmits the driver’s intentions to the wheels faster than a mechanical system.” I’m inclined to disagree with the quicker response but on paper it sounds feasible.

The intention of DAS is to “increase direct driving performance feel by quickly and intelligently communicating road surface feedback to the driver.” The Q50 provides drivers four combinations of steering settings, allowing input customization from light to strong feedback and to fit with existing road conditions. Steering effort and the steering gear ratio are actually changed via the DAS system. A mechanical steering backup system is included in cars equipped with the Direct Adaptive Steering setup.

From earlier in our program we know e-motors big benefit comes in the form of zero rpm, easily accessible torques. In this case, torque figures out to 214 ft.lb. Not bad, but when added on to the petrol engine’s 258 ft.lbs of twisting power, we’re delivered 472 pound feet of torques.

That torque comes in right handy under most all accelerative exchanges at the lower end of the spectrum. Electric torque availability at 0 rpm means excellent off the line performance. Low end cruising in e-mode keeps the pandas happy while mid-range power remains strong. 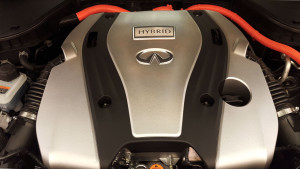 Hybrid powertrain delivers 360 hp between motors, but it’s the 472 ft.lb of torque that wins the day!

Running with the traffic to Cottage Country the Q50 had no issue with keeping up or passing as needed. Faster highway velocities were not a problem as long as rpms were kept in the ideal working range.

Putting out 360 net horsepower (this includes both gas & electric outputs) the Q50 sounded like a low grade afterburner coming online when the system made the switch from electric to gas at lower speeds. A somewhat nerdlike side effect I never tired of.

Infiniti’s Intelligent Dual Clutch system does a brilliant job at seamlessly working out the power transitional state between hybrid, gas and a combination of the two. And the AWD system had no problem pulling us up the 30 degree driveway at the cottage on Lake Bass. 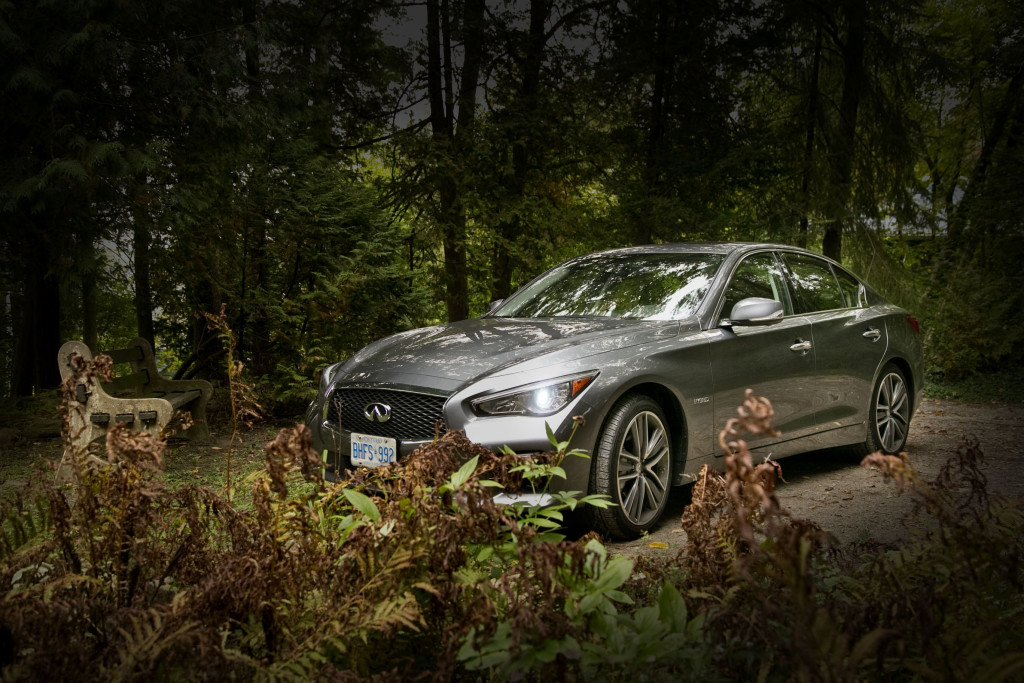 Our AWD tester, tricked out with 19″ aluminum alloy wheels and matching 245/40R19 run flats and sport brakes had not problem making the best of the rolling, windy countryside around Orillia. The Sport Tuned Suspension proved more than capable of handling elevational and grade changes throughout.

Road noise never became an issue thanks to the clever audio geeks at Infiniti. Active Noise Control (ANC) and Active Sound Creation (ASC) appeared to do their jobs at countering exterior audio bits.

While the car’s in-town civility and manners were never a problem, pushing the car to perform quick transitional exchanges did expose understeer and weight issues. But that the Q50 was running both an AWD system and hybrid arrangement more than excuses the less than idyllic autoslalom behaviours. 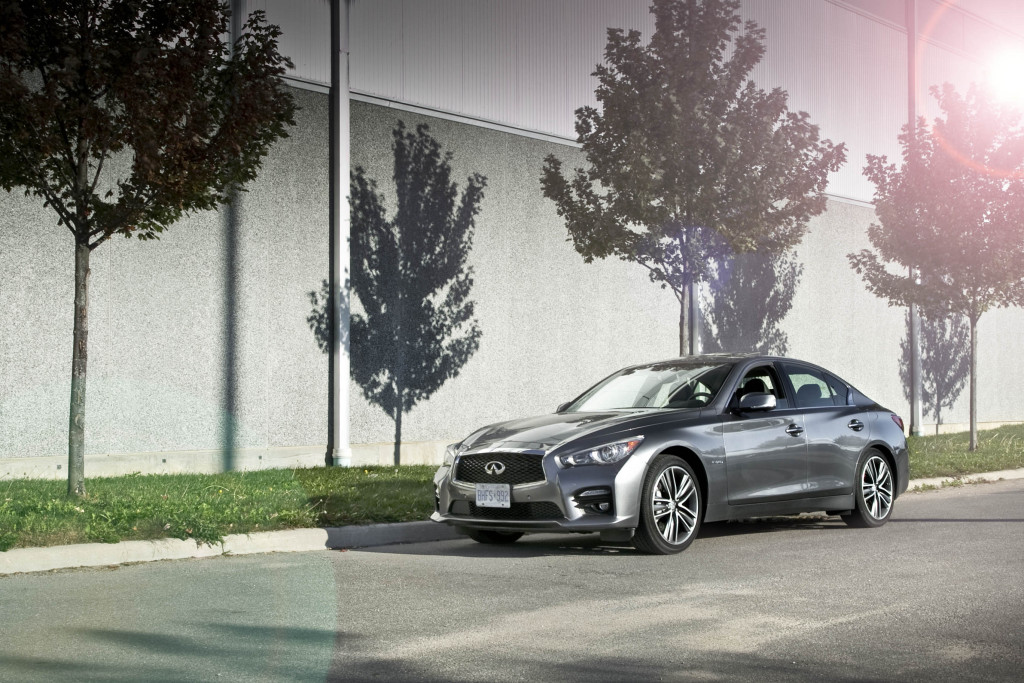 Mileage for the Q50 with the AWD was in perfect agreement with the 8.7 L/100 km figure purported by Infiniti. Impressive considering the amount of city stop n’ go and highway driving delivered over 4 days. This is the first vehicle I’ve driven to accomplish identical consumption figures where others have missed.

Angular inputs, punchy haunches, angry eye beams and a wide aggressive stance make the Q50 one of my fav sedan designs. Compared to BMW’s snoring sedan series, the Infiniti has a more significant visual presence than its Bavarian counterpart.

On profile you can see the new design language at play where the waistline details rises up and disappears over the rear fender treatments. The headlights get special marks for their angry, confrontational attitude while the narrowing hood detail flows off nicely from the blacked out criss-cross grille. Hints of the G37 can still be seen in the roofline and C-pillar.

In the $50,000 range Infiniti has put the Q50 AWD Hybrid in one of the industry’s most competitive segments. BMW, Audi, Acura, Lexus, etc, all produce outstanding products of varying drive and tech traits. But where I feel the Q50 has the edge lay in its hybrid system, tech abilities and styling.

The latter is of course subjective, whereas the powertrain arrangement and AWD build help deliver a car that is actually a bit of a sleeper in my opinion. Our hybridized tester priced out at $58,730, which included $7200 in upgrades and the MSRP and freight bits.

The polarizing flagship of luxury that is Infiniti’s expansive QX80 Limited
Ford’s revised Explorer Ltd for 2016 – not the trackpack edition.