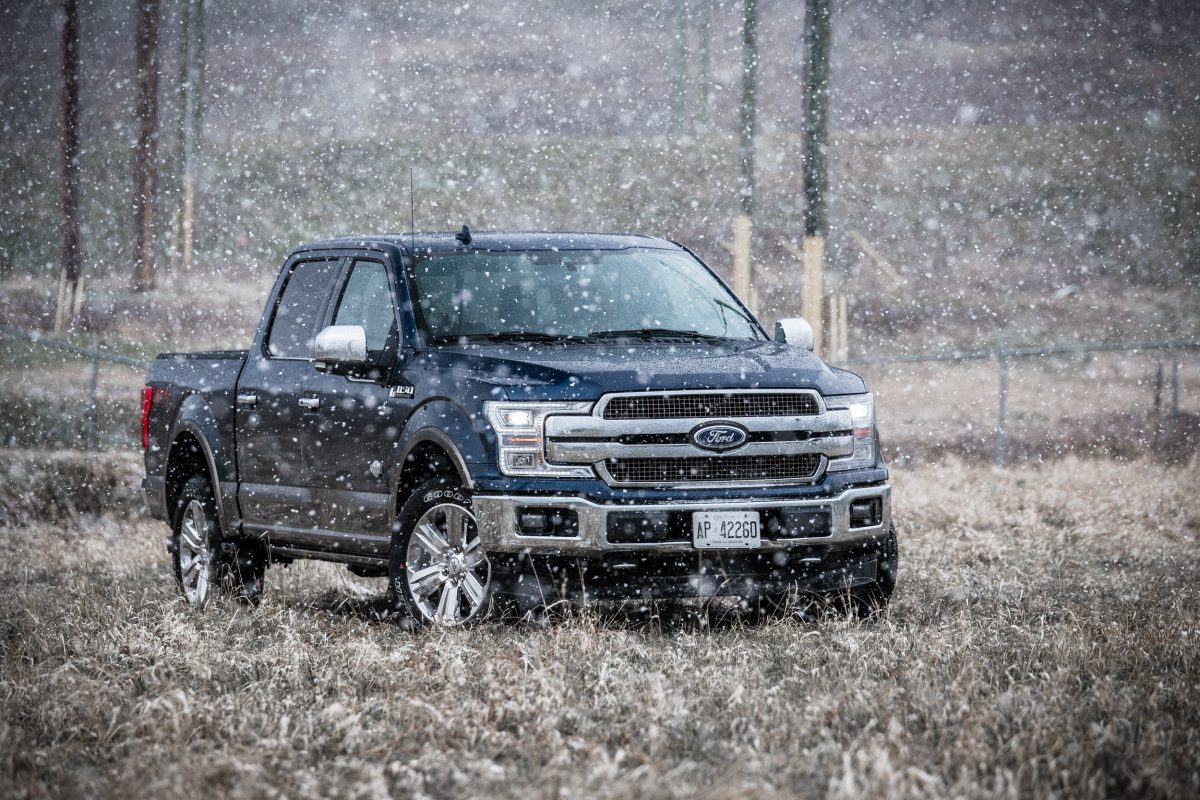 May 2019…a few months back, we of the Albertan prairie dwellers were hit by one of the biggest f**king spring snow storms in years. Whitewalkers huddled under scraggly poplar trees, Tauntaun’s frozen to flagpoles, Yeti’s holding other Yetis, Scottish farmers holding sheep uncomfortably close and me in one 2019 Ford F-150 King Ranch some 20 km east of Calgary near the town of Indus.

But thanks be to the baby Jezuz I’d found myself in the midst of near whiteout conditions in Ford’s awfully big, awfully smancy, awfully tractiony F-150 King Ranch. With its big V8 and valerian tires we managed to make it across tepid roads of white as the wind whipped up White Walker tears from somewhere north of the wall. I shit you not, visibility was 40 ft at best. We lost maybe 1000 of our best Dothraki riders in an unbelievably bad tactical move against the White Walkers on Range Road 283.

Featuring an Electronic 10-speed Transmission with Tow/Haul, Snow/Wet,
EcoSelect and Sport Mode, the longish truck proved solid, stable and planted on snow covered gravel back roads. The 5.0 litre Ti-VCT V8 may have helped the argument with 400 ft.lb of torque @4500 rpm and 395 hp at 3750 rpm.

With the transmission set to manual and Jon Snow mode, the Supercab lengthened truckster kept its composure against hefty crosswinds and changing road conditions. I’ve often made fun of city folk for driving such excessive things in the city, but out in the country where one can easily become ditch-bound for hours, the need for something of 4×4 substance remains a necessity.

Categorized as a “light-duty full-size pickup” the F-150 features a lightweight, aluminum-alloy cab and bed. Measuring out at 4.158 metres long the F-150 supercabbed isn’t what you’d call short. That length can be problematic if the backend gets out on you, especially on loose sloshy roads. But between the Colecovision traction algorithms (AdvanceTrac with Roll Stability Control), expert offroad piloting and grabby 275/65R 18 OWL all-terrain tires the journey from WesterIndus to the trail of Deerfoot was a successful one.

INTERIOR DESIGN
Me wee one, aka The Wubs, at first was very much hesitant to join me in the spacious, worm-leather-lined Terry Crewcab section of the truck. Standing at only 2.5 ft and weighing in at a hefty 25 lb, anything bigger than a red wagon is imposing for the littlest MacKenzie. But thanks to Ford’s designers, leather-inlaid Ogopogos in the seats and storage areas were enough to convince that which is the Wubs to at least sit and talk about the idea of ice cream.

After 30 minutes of explaining the difference between the gas and brake pedal, what the big round wheel thing did, how the 10-speed transmission works, what did the big shifter knob do, why was there a bug on the moonroof, what was the bugs name, the bugs name was Kevin, why was there a bolt rolling about in the bed, how many french fries can we eat, are we getting ice cream, where’s momma, where’s the other white car, are we going to Babba’s house, why, can we bring CarCarBaby and Mr. Squisshles, etc.

I had to explain the ride was a bit rougher than the previous vehicle because of stiffer stronger shocks, weight mgmt requirements and it being more of a utilitarian device than the SUV. She replied with the alphabet, a rousing version of Wiggles on the Bus and an interesting theory on quantitative easing as a short term economic solution.

The 2019 Ford F-150 King Ranch starts at a reasonable $55,000 CAD. In our tester trim, slightly more. Although we’re now into July with monsoon like conditions and grasshopper hordes to contend with, the King R still makes a strong case as a quality truckster choice of prairie proportions.

Lincoln’s 2019 Continental Reserve delivers luxury performance in an AWD ruby-red candy coating!
Lincoln’s redesigned MKC for 2019 is anything but an entry-level offering.