THE AGE OF SPORT: Kia’s 260 hp AWD Sportage shows the Koreans are really not f*cking around

A few years back, circa 2010 I believe, me Da purchased a stunning silver Kia Rondo. Designed with enough greenhouse space to make a hydroponically inclined, 420 aficionado envious, the Rondo’s (aka Ronda) styling was and still is different.

At the time I thought him quite odd for veering away from the safety and comfort of his tried-and-true Dodge minivan collection, but after driving the Ronda I soon realize these Korean mfc’s who had been the butt end of many a poor build quality joke, bad ergonomics, and questionable drive trains, had actually learned and improved on their past mistakes.

Move ahead to last week where I had the opportunity to toss about, and experience a ruddy red Kia’s 2015 Kia Sportage 2.0T SX GDI AWD. Ignoring the excessive badging nomenclature (WE’RE GONNA NEED A BIGGER BOAT!), this latest performance SUV from Kia proved to not only be more disciplined in many key areas but also a blast to drive. 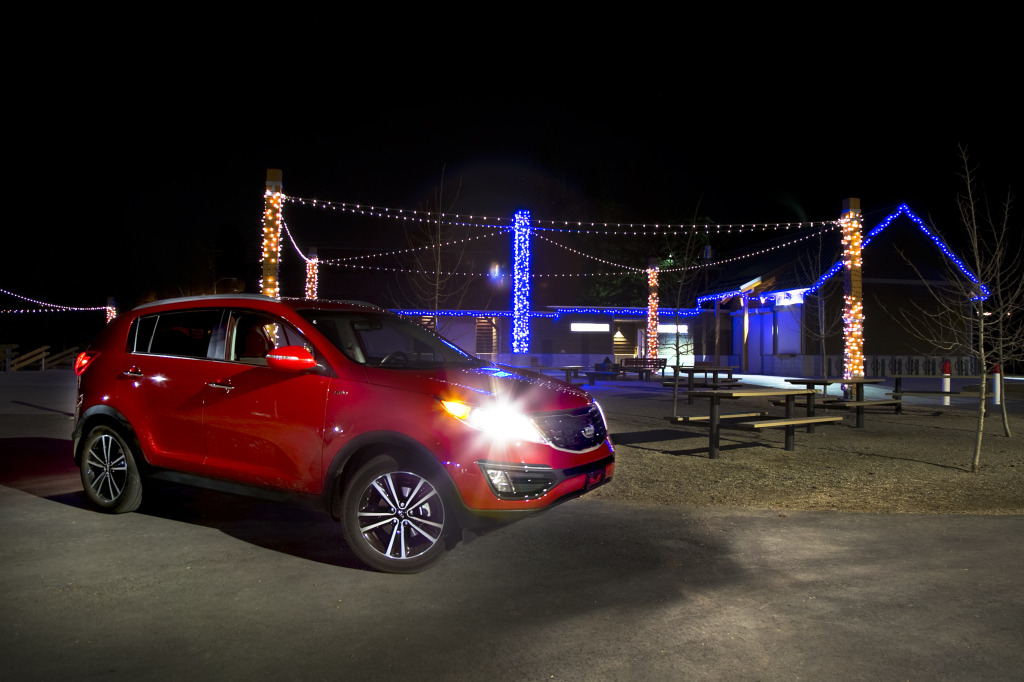 Starting out with the fun bits aka. the blown upon, direct injected 4 banger; a 2.0 liter turbocharged 4-cyclinder good for 260 hp and an impressive 269 lb.ft of torques, has to be one of my new favourite engines. Responsive, linear, smooth, with a wide power band are very real attributes that earns the Sportster many brownie points.

Torque lag was near non-existent, unlike other turbo things I could mention. Power response came in the form of predictable, linear acceleration thanks to Kia’s CVVT (variable camshaft tech), a nicely sized turbocharger and gas direct injection (GDI). Now I’m wanting to try the powerplant out in a smaller, sportier offering like a Forte.

Thanks to those 269 pounding feet of torques coming online at 1,850 rpm and holding strong until 3,000 the Sportage was able to be driven manually in 3rd gear when travelling anywhere between 50 km/h and 80 km/h. This diesel like behaviour shows that the Sportage’s powerband falls perfectly in the inner city/suburban speed range. 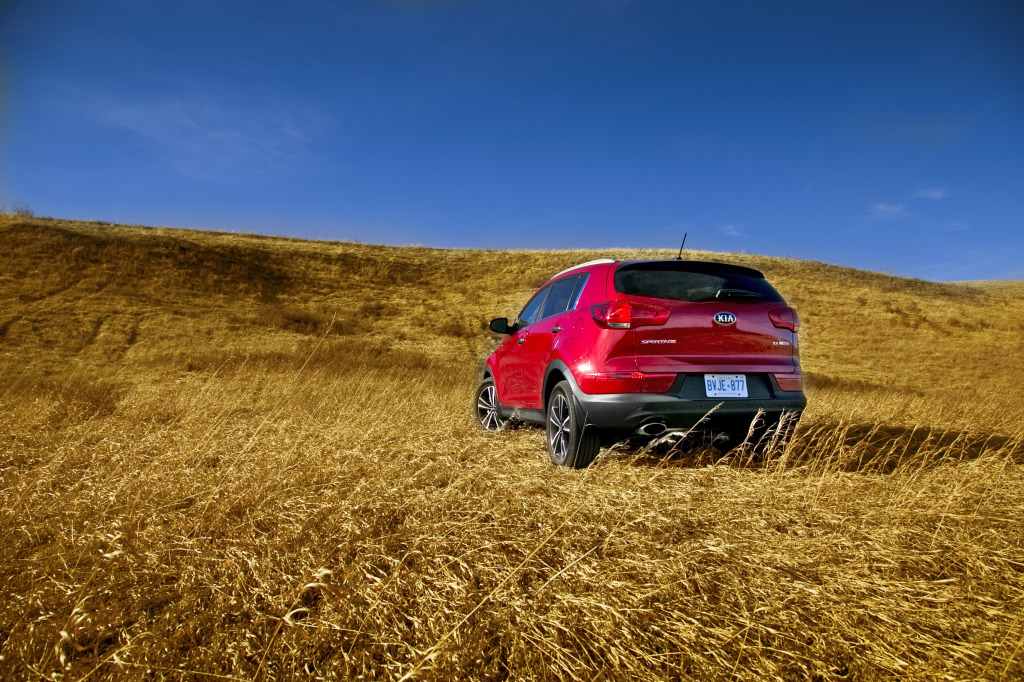 When partnered up with the right talented 6-speed Sportomatic autobox, the Sportage could accelerate out in auto mode without losing critical revs throughout most anywhere in the rev cycle. Brakes were nicely modulated across the board. The ruddy red ride never lost its composure during pretend panic stops or on looser/loser surfaces.

Equipped with Kia’s Dynamax Intelligent All-Wheel Drive (AWD) system, the engineering bits are designed to automatically engage and transfer power to effective wheels whenever slippage is detected. A few weeks ago I’d have had no trouble finding slippage opportunities but during this trip I was satisfied with what was being offered up on dry roads.

Spatially speaking, the Sportage had no trouble fitting my dad’s walker into the rear compartment. Plenty o’ head room so as not to hit one’s head whilst loading said walker to and fro the cargo area. Back seat persons look to enjoy plenty of legroom and headroom. With seats down one might fit many T.J. Walkers in the back, or hundreds of cantaloupes, or a plethora of chickens if you’re of the Hutterite persuasion. 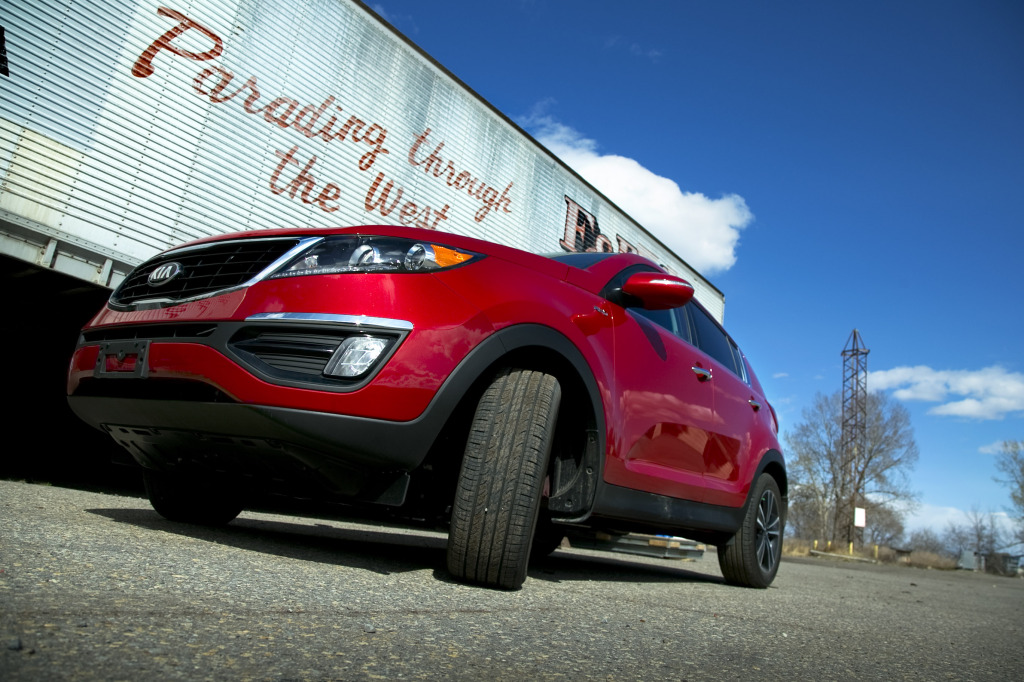 Sportage fits comfortably into the west

Driver seating was very much comfortable with an excellent driving position for viewing down upon lesser minions. Extra lateral support would be appreciated since we are dealing with a Sport monikered vehicle.

Sportage’s ride was excellent about town and super quiet on highway at speeds. When it came to irregular road hemorrhoids and negative spaces, the back end did lose its confidence slightly with some thudding making its way back into the cabin. But otherwise on the majority of road surfaces the Sportage felt like a more significant, pricier SUV.

Handling was right on super great. With a perfect diametered steering wheel and a nice tactile grip, the Sportage won many points for on center feel, parking lot maneuverability, responsiveness, and feedback on larger high speed corners. Really quite surprising for a $30k plus SUV, from a maker that still gets snickers from less informed persons.

Stylistically I preferred the previous model’s design but this 2015 grows on you after photographing it in various dusty fields, inner city lots and Bowness Park. On profile the Sportage does emanate a hint of VW Toureg but that dissipates once you move to a 3/4 forward position where a more aggressive sloping nose and angular LED lights frame out the grille work. Like most SUV’s the Sportage does have a fairly tall waistline but the proportions seem to work when you take into consideration the wheel-to-wheel spacing and trailing roofline. From the back Mr. Sportage presents a confident and planted stance, one that is more masculine than certain other manufacturers.

(Which by the way, if you’re in Calgary please do stop by the city’s new Bowness Park in NW as it now sports a new cafe, festive lighting and right proper bench seating for the ice skating or duck watching) 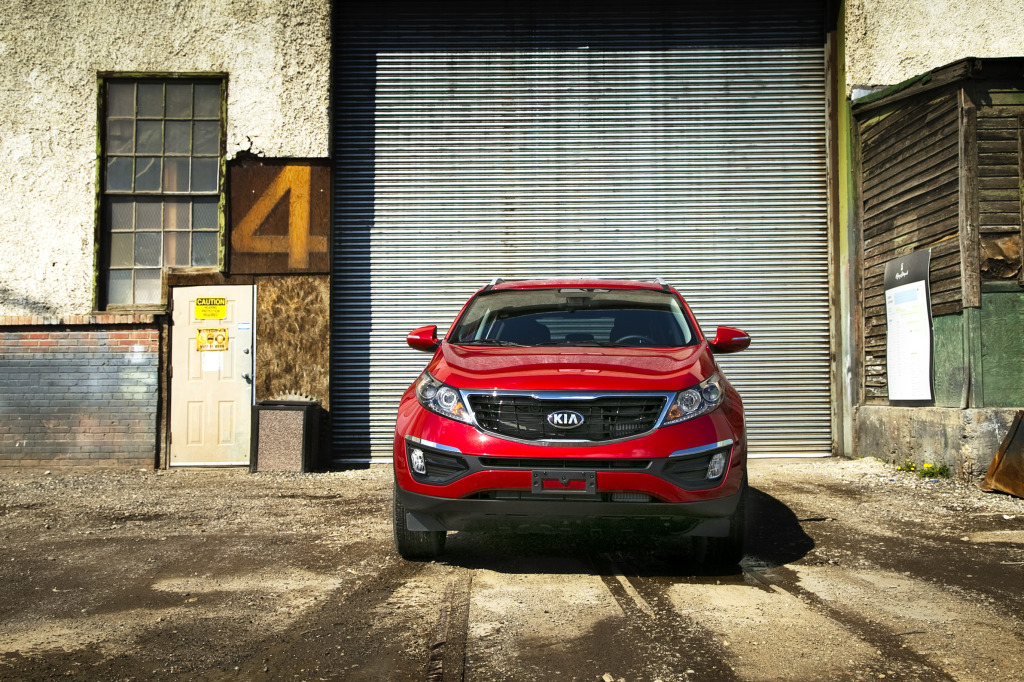 Sportage is big for a Kia but it works

A few minor issues of note:
The area between the dash and windshield has a matte finish covering the majority of the surface but also a glossy section. That glossy bit sits right in front of the driver and reflects back onto the windshield, regardless of sunny or cloudy conditions.

Stereo presets and list configuration also could use some work as the intuitional ability to program without looking at the manual was not intuitive. And the sound system, on SAT radio, was less than stellar.

Overall, thanks to a reasonable price point, fluid, predictable, usable power, a more disciplined gearbox, quality fit and finish, and a responsive chassis/suspension setup, I’d have to give the Sportage SX T a solid 8.75 slightly chilled haggis’ out of 10 temperate haggis’.