As perogies, champignons and kolbasa are to Edmonton; so it is that trucks, Black Angus and petroleum contractors are to the Calgary landscape. Why a person can’t swing a former provincial MP about by the blue shirt without hitting an F-150 in the face. So in keeping with the city’s truck-leaning mandate, I chose to become one of the truckophiles and experience GMC’s 2015 4×4 Canyon CrewCab about the prairie grasslands and Timothy Horton’s earlier this month.

GMC’s 5-person Canyon resides in a most competitive segment where it’s required to go head to head with Ford’s best selling F-150 and Dodge RAM’s truckster offering. In the city there are definitely strong brand loyalties at play, especially between Ford and GM. This loyalty is typically demonstrated in graphical representation on the back window of the truck, with one Calvin (of Calvin & Hobbes) peeing on either the Ford or Chevy logo. Dependent of course on where the truckster’s loyalties reside. 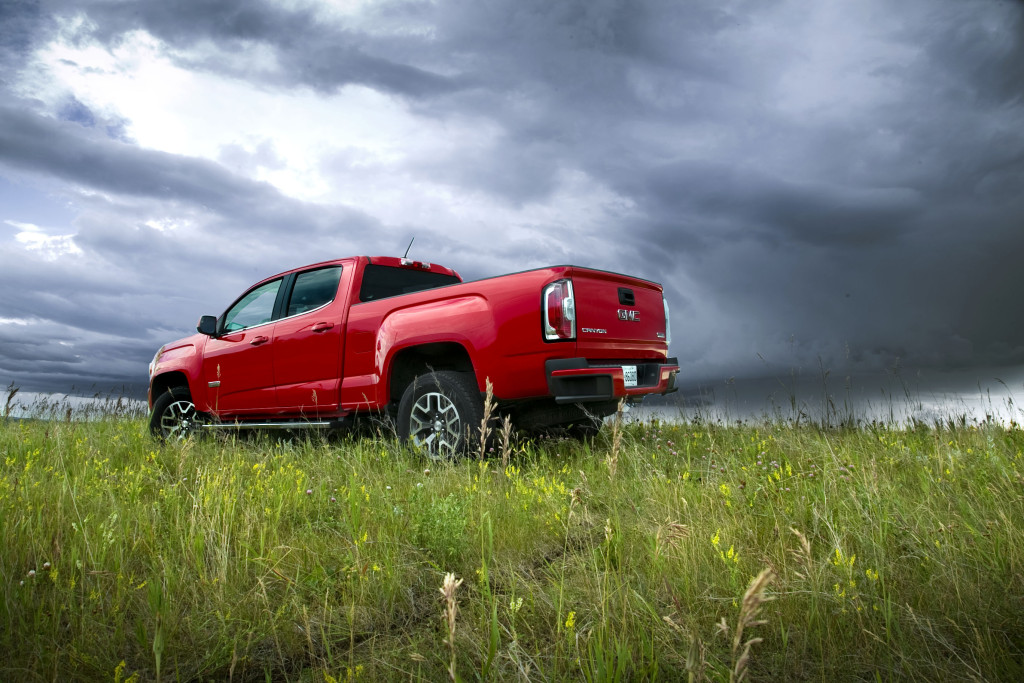 Calvin’s urinary habits aside, I personally have no brand loyalties to any of the truck mfcs. I will say that, overall I did enjoy the Canyon, in spite of what I felt to be too small of a powerplant. I found it comfortable inside with good ergonomical considerations. I felt the overall build and driveline mixings worked quite well. Steering feel and feedback was excellent in the parking lots, about the general city area and a short stint on the highway.

On the critical side, the suspension was a bit bouncy stiff for my liking. However, when ride expectations were adjusted to truck mode then I learned to accept the stiffer ride in exchange for tow capacity and load bearing abilities.

The gearbox showed itself to be good at its job, but there was at times gear-selection confusion under certain acceleration conditions. The hesitational issue seemed to happen in the 1200-1600 rpm range when throttle inputs, gear selection and roadspeed couldn’t quite agree on 2nd gear or upshifting to 3rd. The vacillation situation wouldn’t be a deal killer was I looking to buy but I’d like to see GM address the concern.

Stylistically, the Canyon is a good looking truck. There I said it. The red certainly didn’t hurt the argument. GM’s signature bevel/emboss stamping details are there on the hood and fender. This stamping trick, found on most all of GM’s truck/SUV line, helps to break up the horizontal massing visual while also drawing attention to the truck’s ample haunches.

Otherwise, the Canyon, well it looks like a truck. Mission accomplished. I can maybe also add I found the 2015 to be a more attractive, more stylized truck than its predecessor. Oh, and the headlights and grillwork proved rather photogenic. (see gallery)

But instead of me rambling on in run-on sentences and verbological assessments, I thought I’d revise down the remainder of the review to a short, point form type format. When you’re done, there are images and coffee in the gallery.

Given I’m not a truck guy I had to reconfigure my vehicular expectations and driving styles for the week. But the Canyon didn’t disappoint in the mucky bits, on pavement or at the Tim’s drivethru. Plant a torquier powerplant under the stamped bonnet and Bob’s your uncle.