The ironic contrast of a contemporary structure placed deliberately on the slopes of an active Icelandic volcano is not lost on us. But that juxtaposed mix of raw, natural openness is exactly what the new ION Luxury Adventure hotel is hoping will draw visitors from around the world.

Located on the slopes of active volcano Mt. Hengill, just south of Selfoss, this new Design Hotel project takes advantage of its proximity to Iceland’s ‘Golden Circle’. This Golden Circle is a route encompassing a UNESCO World Heritage site between a place I can’t pronounce (the country’s largest lake) and the famous Gulfoss waterfall. This information will come in handy during the next volcanic eruption. At only 40 kilometres west of Reykjavik, Route 1 provides visitors a fairly direct route to the hotel on the country’s southwest coast. 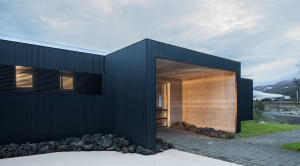 The hotel, previously an inn for the Nesjavellir Geothermal Power Plant workers, required a bit of a redux to bring it to its current luxury status. Santa Monica based Minarc oversaw the renovation with the addition of a new wing and the incorporaiton of a prefabricated panelized building system. One of the key directives for Minarc was to provide guests as much natural light as possible. Huge floor to ceiling windows met the light criteria while the overall view of the region’s enigmatic scenery was enhanced by placing the main communal area up on pillars. At night, the brightly lit lounge, raised up on its pillars, looks like some type of Icelandic centipede coming out of the mountain. But with 46 rooms refitted with naturally sourced materials, the Design Hotels wants to see the hotel promoted as an ‘eco-conscious’ luxury alternative.

In keeping with the natural surroundings, the decision was made to go with a raw concrete and black lava exterior. Various sustainable techniques were used to support the building’s heating, electric and water needs. Throughout the space the designer has used recycled materials for beds and chairs, as well as driftwood and other natural pieces to further reinforce the symbiotic mandate.

Surrounded by the supporting stilts, underneath the lounge area, resides an open-air, 10 metre geothermal hot tub for guests to soak out the day’s Icelandic hiking adventures. Of which, according to the press piece, there are many in the area. For those wanting to explore about, the hotel notes ice climbing, stargazing, glacier walks, bird-watching and diving are available in the region. Or for those geothermal nerds wanting to get their geothermal on, the Nesjavellir Geothermal Power Plant is available for tours.